Motto: Catch up and mustard

I am alone. My best friend is back home with her family, about to go on vacation. My other friends are busy - at least they are right now. This means that I have some time to dive into the immense backlog of topics I’ve put en queue to write about on this Blog. Each new topic will be introduced in BOLD, CAPITOL text.

I saw MAN OF STEEL. These LINES stuck out to me:

“I grew up in Kansas, general. I’m about as American as it gets”. I recognize how much this line must make people from the coasts scoff, but I feel and have always felt that Kansas does represent good, old-fashioned America (for better or worse). Maybe Google feels that way, too, considering they saw Kansas City as the prototypical American city for their initial Fiber rollout.

“He’s coming in through the RSS feeds!” This has got to be one of the most hilarious technologically incorrect lines I’ve ever EVER heard in a movie. I laughed audibly in the theater during a scene that wasn’t meant to be funny… and that’s usually a bad thing. RSS, for those of you who don’t know, is an old-ish tech that allows you to pull content off a website. Google Reader (until very recently) used RSS to build an aggregate channel of all your favorite sites. RSS has positively nothing to do with television or the greater network of multimedia broadcasting.

“Welcome to the Planet” I liked this line. As it’s used in the film, it is referring to the Daily Planet newspaper where Clark Kent works; but it works on the other level. I like things like that. Wordplay.

Apple’s iOS 7 LOOKS AN AWFUL LOT LIKE ANDROID JELLY BEAN in certain ways. This issue was covered in detail on most tech-type websites a while back. I’m guessing if you care enough to know why or how that is, you probably have already seen it somewhere. I just want to say how delicious it is to see Apple emulate Google’s design.

Disclaimer: I am very aware of how much Google has historically found inspiration for their products from the iPhone and from Facebook. In fact, here’s a relevant XKCD:

I’m PHASING OUT GOOGLE TASKS IN LIEU OF GOOGLE KEEP. They serve a similar purpose as one another, but Google Keep is actively being developed and Google Tasks is likely one of the next Google products/services to enter the graveyard. Google Keep is better than Google Tasks in every way, save for the ability to add Tasks to your calendar. I assume this functionality will come at some point and I will wonder how I ever got along without it.

That’s a common theme with technology and I. Something new comes out that supersedes something else, and I instantly forget what it was like or how I got along when I used the old thing. Google Hangouts did this to Google Talk. Android 4.0 did this to Android 2.3.

As I touched on with Post #100 - MELISSA IS BACK and all the sudden it’s like I have a fiance again! I’m really really glad she is home, that I much cannot overstate. It has been and will continue to be an effort to establish a balance of all things. When you live alone and have opposite sleep cycles of your significant other, the routine establishes itself naturally. You talk in the morning and at night. The rest of your day is yours to do with what you please. Now, we actually have to keep each other in mind when lining out plans. I hope to have more time to write and do my other “guy things” soon.

I ACCIDENTALLY DERIVED KARNAUGH MAPS WHILE TRYING TO CREATE A BETTER 4-WAY VENN DIAGRAM. Karnaugh Maps, or “K-maps” are a tool you learn early on in electrical/computer engineering. They are used to reduce logical constraints in a system made of multiple binary/Boolean inputs. Long story short, I sat down to create a 4-way Venn Diagram that was better than the one I used in Column #97 (about human attractiveness). For reference: 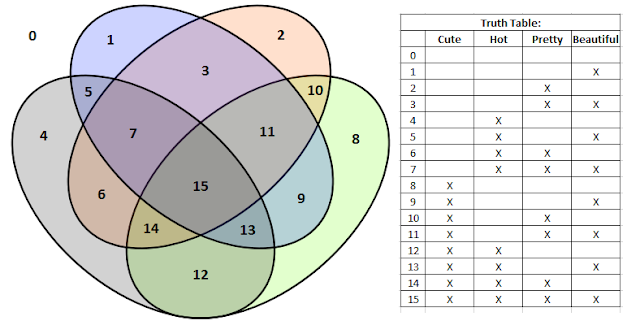 Non-intuitive, hard to draw by hand, and hard to work with on computers When I was done, I had created this: 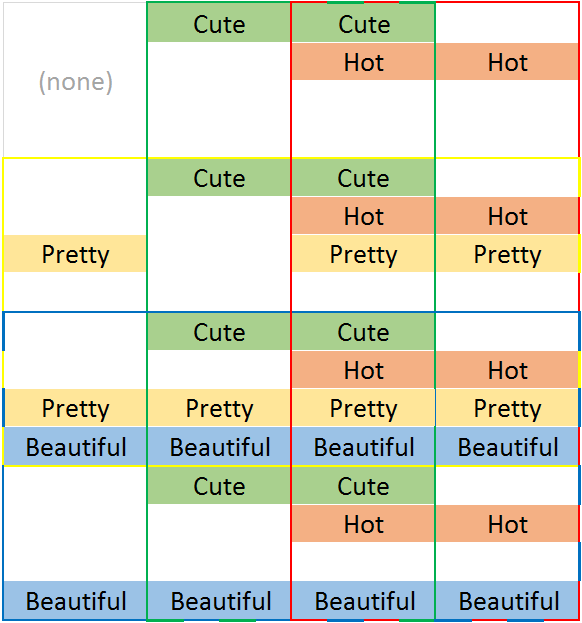 Easy to draw. Easy work work with on computer. More intuitive. Those of you who have used K-Maps probably already can see that the 4-Way Venn I created is also a K-Map. Those of you who don’t may be helped by this diagram of your usual K-Map I pulled from Wikipedia:

Note that I’m not proud I accidentally figured this out while exploring the four variables “Cute”, “Hot”, “Pretty”, and “Beautiful”.

I had a weird extended daydream about THE FUTURE OF CONSUMER TECHNOLOGY the other day. I was thinking about Google Glass and the upcoming tidal wave of smartwatches (seriously, Apple, Google, Microsoft, Motorola, Samsung, Sony, and basically everyone else are rumored to be working on smartwatches). I look forward to the upcoming/already happened advent of “wearable technology”. I can’t wait to look at my wrist and see something more useful than the time of day. I’ve looked forward to this upcoming eventuality ever since I first saw Leela’s wristlojackimator: 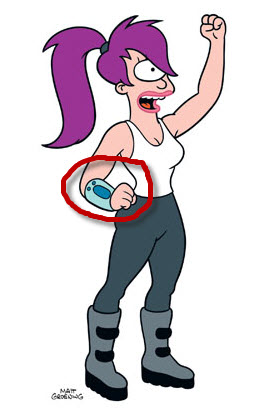 There’s more, though. I think that we may soon converge our technological tethers to the cloud to a single, true broadcast device. The rest of our tech will borrow this connection. Basically, your phone (or something like it) will connect to the internet. Then your watch, glasses, earpiece, tablet, and/or whatever else will connect to your phone. Our pieces of consumer tech are going to build stronger relationships with one-another.

There was seriously way more to it than that. I was going to write a whole feature post about it… but I forgot most of it already.

This backlog of mine included both the TOP 5 and the QUOTE. Just EFWHYEI. It also included THESE PICTURES: 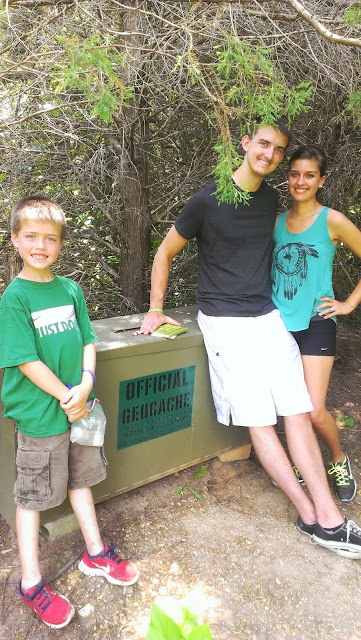 Geocaching makes me feel like a spy, collecting dead-drops 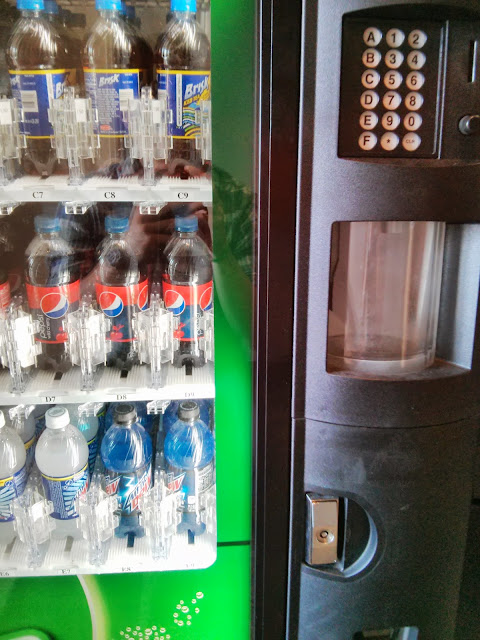 “I wish we had access to costumes. It’d be cool if we both showed up dressed as fruit, then looked at her like ‘WTF?’” Josh