Upfront: “data” is the plural of “datum”. It is not a singular noun, it is plural. I will refer to it as such.

Data are information encoded into a form suitable for storage, transmission, or processing. If you Google the definition of “data”, you get:

facts and statistics collected together for reference or analysis. - Google’s main definition for “data”

Facts are Not in Fact, Facts

Data, though, are not “facts” in the traditional sense of the word. “Fact” means something else in dataspeak(tm).

Firstly, data “facts” can be outright wrong. Factual inaccuracy in data happens all the time. Open up the contacts app on your phone. Call every single number in there you’d find a fair few that are no longer factually accurate. The record stored in your contacts app (probably in a SQLite database, under the hood), contains many “facts” that may not be true.

Thirdly, data can (and often are) selectively represented in such a way to suit the agenda of the person presenting those data. There are a whole host of tricks marketers can use to represent technically accurate information in completely misleading ways. One such example is the aptly named “lie factor”. See this Wikipedia Article for tons of great examples.

Data can refer to many different things, and come in many different forms. I am working on another article about information encoding and data parsing, but for now it’s enough to say that some data are simple, some are less so.

Just like there is no universally agreed to definition of what all it means to be ‘fit’, there isn’t a global, all-encompassing definition set of what types of data exist. Different programming languages (or Database technologies) contain different sets of data types. Here are some of the more common ones.

Boolean data are either true or false. Zero or one. Yes or no.2

Floating point numbers are numbers that allow for decimals and really huge numbers. If we were to use math terms, this would include all rational and irrational numbers. These are separate from integers because of how they are represented in binary and thus how the computer stores them and processes them. Floating points numbers may be stored as approximations of the numbers they really represent. There is no closed-form way to store π, for example. But numbers don’t need to be irrational to be stored as approximations in the computer. For an example of the effects of this approximation, see this Google result.

“Strings” are just text. They call them “strings” because some languages (such as “C++”) don’t natively let you work with text. Instead you have to work with individual characters… that gave rise to the need for libraries of code that helped you ‘string together’ those characters and work with the resulting text. The name stuck. Modern programming languages have native support for strings.

Not every language contains constructs for dates and times. Many databases force you to just handle your own encoding and decoding of dates & times. However, they’re so common in application development and record keeping that they’re a standard feature of any modern programming language. Depending on the language, you may also have support for durations.

Enumerations are a good concept that should be more well known by normies. An enumeration is just a thing that has a certain, finite, pre-determined set of values it can have. You have to be able to enumerate those values. This lets you maintain control over inputs and define behaviors on a case-by-case basis more easily.

The last type of data is a catch-all for “anything more complex”. Some of the data types I’ve listed above are actually objects behind the scenes. Objects can hold arbitrary amounts of data of whatever format you like. They are an incredibly powerful concept and thus are the basis of what many coding languages were developed around. You can’t really represent an object without resorting to some sort of conventional notation. Arguably the most widely-used notion is the JavaScript Object Notation (aka “JSON”).

See my previous article on the difference between analog and digital. All digital data can be thought of as a long long long string of zeroes and ones. Doesn’t matter if you’re looking at a picture, listening to a song, reading an email, or crunching numbers in Excel - if you’re doing it on a computer, you’re interacting with ones and zeroes.

We have special names for different quantities of zeros and ones: 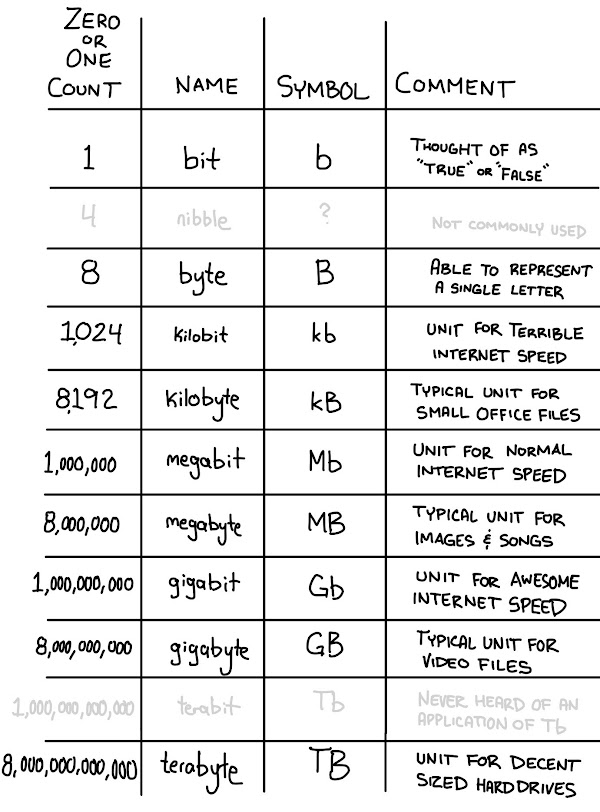 There are a number of ways in which you can turn zeroes and ones into meaningful information. The translation of data into information is dependent on context and convention.

There are numerous other possible meanings of 01010101, I’m not smart enough to look up what operations it might mean in machine code or other such possible interpretations.

Turning data into information is the process called “parsing”. I plan to write another post about data parsing in the future. Maybe I’ll remember to update this paragraph to include a link to it.

This section included mostly for completeness. Not all data are digital. You can just write things out. A vinyl record is a form of fully analog data. A poloroid photograph is a purely analog form of data.

My favorite example of analog data I can’t find a picture of - when a wall has a small light or something jutting out the side of it and it rains you can interpret the direction of the rainfall from the dry streak under the wall protrusion. Something about that is really satisfying to me.

Pure analog data are less common than analog stores of digital data. You could probably just forget you read this bottom section and be just fine.