Motto: Too Much of a Good Thing is a Great Thing

Fact: I Already Don’t like Color Changes and Addition of the “Fact of the Update”.

You may have noticed that it’s been a while since my last update. There’s a really great reason for that; last Sunday my cousin Joe came up to stay with me for the week while he took some preparatory classes for his medical internship this summer.

It has been an awesome and somewhat crazy week. We have had a fortnight’s amount of fun in half the time.

His brother Jon came up Thursday night. Since that time we’ve had a week’s worth of fun in 3 days.

I have a metric buttload of stories from the week, and an equal amount of videos. Rather than write at length about everything we did - I’ll just show you:

[editor’s note: this video was lost to time]

That’s just what I filmed. I didn’t really have the intention to make that video until after I realized just how much footage I had. I showed less than 1/50th of the videogame playing footage I took.

I’ve determined it takes me about an hour to make each minute of video I make. The above video is around 3 minutes long. I (sadly) took me about 3 hours to cut together how I liked it.

3 select stories from the weekend:

1 - Baseball and the redhead

On Friday we went to the Royal’s game in celebration of Joe’s 24th birthday. When we got there, we found our seats well in advance of the game (we didn’t bring a truck or tailgating supplies because it was a weak commitment). Long story short, we left out seats for a bit and came back to find they had been stolen by a group of kids. “Kids” in this instance is a group of people between the ages of 18 and 21.

No big deal, we find another set of seats nearby.

A redheaded kid started to annoy the three of us with his loud antics. He left and came back with a beer. I told my cousins I would take bets on him being underage and, before they could reply, he made a really big show about giving a Driver’s License back to his friend.

To make a somewhat long story short, less than 5 minutes later the kid was pulled out of the stands into the hall by security. He came back and told his friends he was only in trouble for “swearing too much”. This turned out to be a lie. Jon was coming back from the restroom and came across the security people telling him if he drank underage he would be thrown out of the game.

Joe, Jon, and I went to the Legends for a brief stint of man-shopping. I wasn’t buying anything, so I decided to pass the time the same way I do when Melissa goes shopping for clothes - by doing embarrassing things without shame.

I danced. I juggled anything I could find. I pretended I was playing Battlefield in real life (okay, we all kind of did that last thing).

Then we went to Dave and Buster’s. It had been a year since I had been there last time. Jon was with me back then, too. We had the same waiter that we had had so long ago. The very fact that we remembered him should go to show just how good he was. He can (and did) recite the whole “V” monologue from “V for Vendetta”. It was awesome (again).

Then we played games. I won the most tickets - mostly on account of getting lucky once.

We played Battlefield 3 every night after coming home from the day’s festivities. We played as a team and, in doing so, won a lot.

That was a short story.

Joe and Jon jointly taught me a new pen spin. It’s nifty, but I’m terrible at it. I can combo it into the one I already have mastered about 5% of the time right now. Here is an example of a good one.

I put a shirt on just to make this. You’re welcome. I have 2 feature columns half-written right now. One on entellajence and another on tools (such as spell check).

There’s a church bell playing “America the Beautiful” outside my window somewhere. I’ve lived here for almost a year, and I have never heard a bell before. 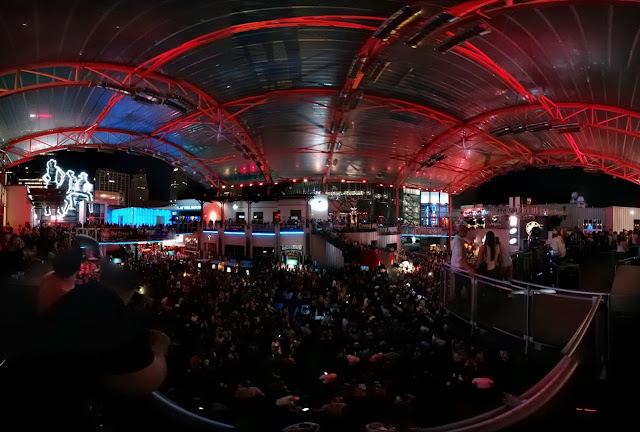 We stumbled across a free country music concert. We are not fans. 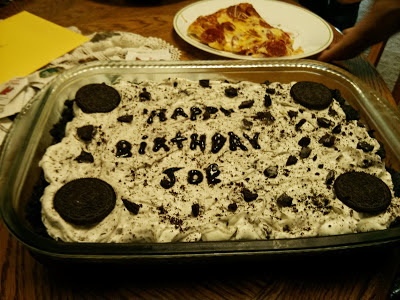 We visited our aunt and were reminded we have the sweetest family.

Birthday boy man on the left. Jon’s weird arm condition on the right. 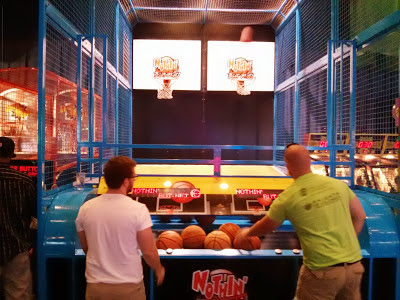 Dave and Buster’s is a good time. 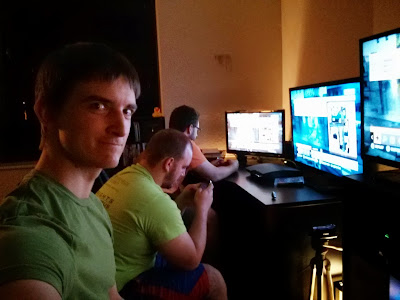 We destroyed a bunch of 12 year olds. No shame.

“I have laser-precision punches. I could punch a gnat off a fly’s ass” Jon