Last week was a rare week.

Actually, expand that out to last month.

Actually, expand that out to the whole last year.

I’m going to work my way forward in time and tell you what I mean.

As of the moment I’m writing this, exactly 365 days ago I was waiting outside of KU’s dining hall for a shuttle bus to take my floor to showing of “The Avengers” on its opening night. It was the weekend before finals and it was the last hurrah for Templin 3. After we finally got on the shuttle and got our tickets in-hand - I had one of the most memorable nights of my life.

Fast forward exactly 364 days into the future (yesterday) and you’d find me sitting in a restaurant on Mass Street with many of those same floor residents, waiting to go to Iron Man 3. We went to the same theater as we did the year before. We sat a couple rows up from where we did the year before. It was all very nostalgia-ey and fun.

[I wrote the column up to this point 2 days ago, from this point forward I wrote today]

Six months ago I dropped Facebook. I wrote about dropping Facebook on November 30th of last year in Column #47. I can honestly say I haven’t looked back with any seriousness even once. The only motivation I have to go back are external motivators. If it were up to me, I would never go back - and it’s up to me. Facebook was not useful for me and therefore I did not use it. Not having it has turned out to be everything I hoped it would be. All the justifications I gave for not having one in my 47th column have really proven themselves true in my time without one.

I don’t miss it. Google+ is better.

Last week I splurged on myself. I decided it was high time that I finally got myself a couple of things I’ve had my eyes on for years, but have never had the money or the justification to purchase.

Here’s something I made with my first hour or so with the camera:

[Editor’s note: This video was lost to time]

Not really. There is still nothing set in stone concerning the wedding. Melissa and I are working on what we can, but our current circumstances are limiting in that capacity. As more information rolls in it will be disseminated to the proper informational repositories (I’ll tell the people who should know).

The picture to go out on for this column is a picture I took of a page of my Moleskine. 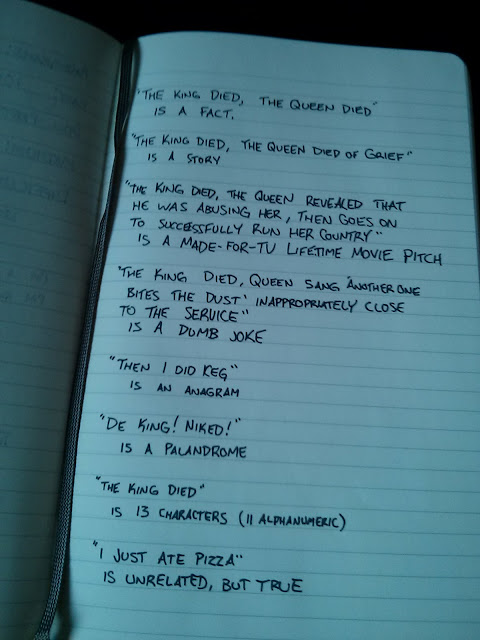 I thought this encapsulated my personality pretty well.

Top 5: Plans for the GoPro

“That’s the main reason I take it. I eat tons of broccoli almost every day. Still take a little metamucil so I can knock out ninja (no wipe) poops on the reg” Redditor Khatib