Motto: “If I had an hour to save the world I would spend 59 minutes defining the problem and one minute finding solutions”

The motto today was brought to you by Albert Einstein. It will come into play later. Today is Monday. 7 days ago was a different Monday. On that Monday I started my project. I seek to educate you on my project, its goals, and how I’ve gone about trying to meet them. Life only seems to get more hectic as you get older. Kids have little responsibility until they get into school. In school you slowly have things added to your plate. Then you go to college and there’s a lot going on. After college comes real life, which is similarly challenging. Each stage gives you more and more to lose. Failure goes from getting a bad grade that doesn’t really matter, to getting a bad grade that might end up mattering, to all the possible ways you could mess up real life (going broke, getting sick, doing nothing with your life, etc). This is a problem. To solve this problem, I spent several years studying its true definition. You can’t actually define “life” and all of its potential pitfalls, but you can try. So I have been trying. Having a healthy fear of general failure, I have on several occasions thought “I need to keep track of things so I don’t wake up one day to find I’ve painted myself in a corner”. This was the nagging thought that spurred my Life Tracking System (LTS). The goal of the LTS is to audit my life in the four distinct areas I’ve determined have the greatest significance or impact. I want to track the following: Diet - Garbage in, garbage out. What you eat is what you are. Exercise - If you don’t use it, you lose it. Money - I’m spending how much on what?!? Demetri - My list of 25 things a “good” person would do every day. In doing so I hope to gain a greater sense of self, a greater handle on the important things in life, and use this knowledge to make intentional and positive changes in my life. I’ve tried doing something like this on several occasions in the past. The vast majority of them failed. Using those failures I’ve figured out what needed to be done for a system to be successful. I sought to make data entry as quick, efficient, and simple as possible. Beyond that, my goal was to have all the data manipulation and summaries performed automatically.

I have implemented the LTS using a Google Form and Spreadsheet with several associated custom-built scripts. The form is bookmarked and present on my main Android homescreen. It presents a single input interface for all four facets I’m tracking. 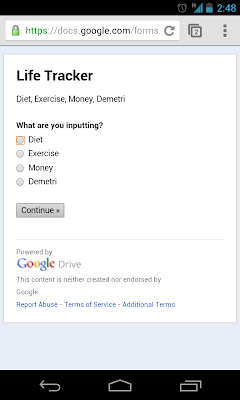 Each radio button links to its own section of the form. 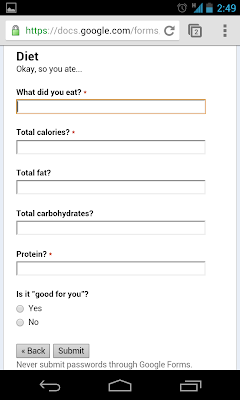 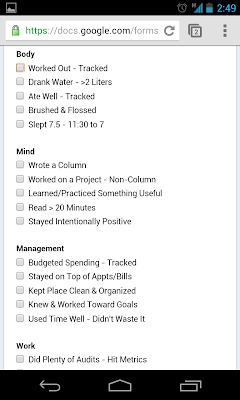 The data I enter in these screens is added to a spreadsheet. Making sense of the raw spreadsheet is difficult. It has 41 columns and any given row has data in a maximum of 7 of them. It’s mostly white space, but the data is there. 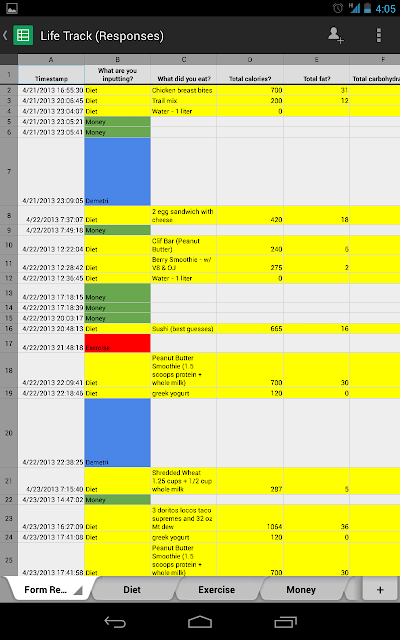 To remedy this, each time data is entered I have it sorted away automatically via a script I wrote. The script formats and copies the data over to one of the four summary sheets I built to represent each facet. The system works; and I’ve used it to its fullest extent for the past seven days. This is my life last week: 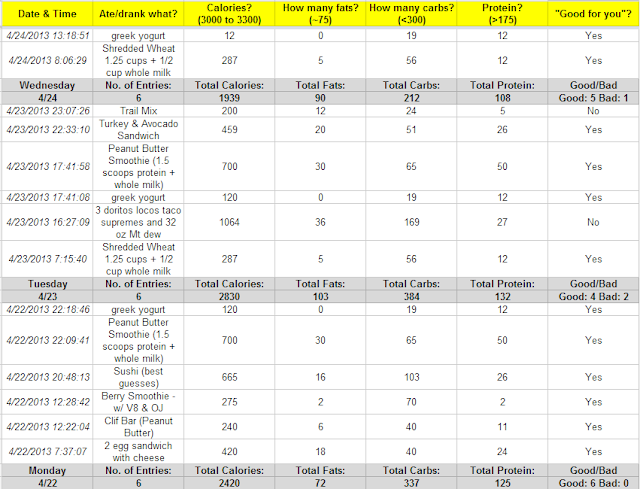 Desktop screenshot showing a portion of my week’s dietary intake (summaries are after each day, not before) 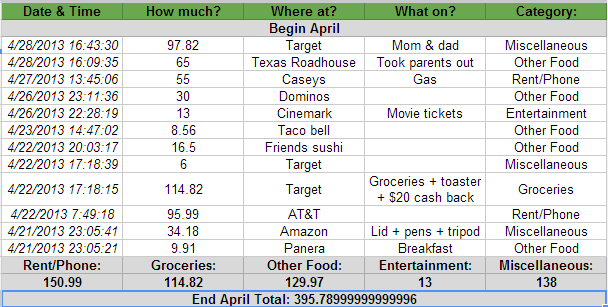 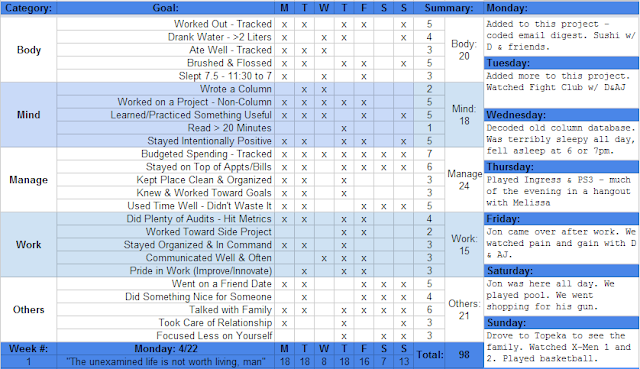 Demetri Summary - more productive than the past 16 weeks

I have several other scripts that insert daily, weekly, or monthly summaries of each facet. One sends a summary digest to my email every Monday. Rather than include a screenshot of it I’ll just say that it summarizes every day with the number of Demetri goals completed, the dietary summary from each day, and the number of days I worked out.

That is my system. Those are my goals. This is what I’m doing. That is what I’ve done. Through my initial results I have already learned a few things. I’ll use the Top 5 to outline those things below.

For completeness I feel like I should include a picture of my Workout/Demetri printout from last week: 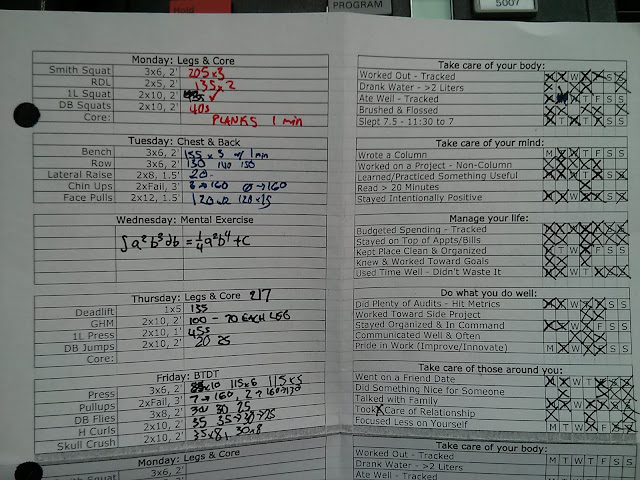 Thank you for stopping by. I promise my next column won’t be so full of business. Probably wedding stuff.

Top 5: Things I’ve Learned after a Single Week with the LTS