About the motto - I’m watching Donnie Darko. So you might have to take this entire post with a grain of salt.

Maybe a cinder block of salt.

For a bit of insight as to how my brain works, I am writing this sentence an hour and a half after the previous sentence.

So I got my EDC bag in the mail today. I like it. I got myself a nice Decepticon patch for it. It’s awesome. Visual evidence of awesomeness: 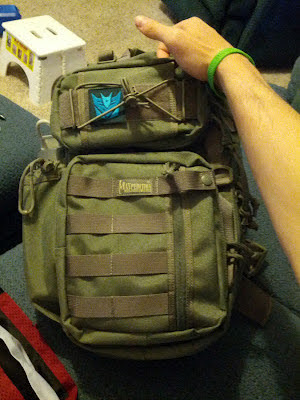 The bag itself is looking like its going to fill its intended purpose perfectly. It’s a Maxpedition Gearslinger Sitka. Very high quality. Feels very tough. Fits in all the stuff I’m including later in my Top 5. I’m pretty pumped.

Probably not as pumped as my cousin is… We went and got him a golden retriever. It was good times hanging with the brothers. Made me look forward to when I get my first dog. They are awesome.

I want to spend more time in Lawrence. I like it there.

This post was light on the entertainment value. My bad.

“Jokes on You, I just Pooped from that Butt” - Jon Sliter, after he was bum-punched

“These are Very Elegant Trailers!” - Jon Sliter, while riding through Missouri to get his dog