Motto: I've got nothing to say - but I'm going to say a lot

It's been several columns since I've written about Google - so it's probably about that time. I'll end the section about Google with some bold text so you can skip it if you aren't interested.
Google announced "Keep", a lightweight notetaking app. When I first found out, I had really really high hopes. They were quickly let down, though. The service is way more lightweight than I had anticipated. There is no options for basic categorization or rich text formatting - let alone any of the more advanced features I was hoping for. After the initial letdown, though, I decided that the service wasn't all bad. Adding notes and looking through the notes you have is SUPER fast. It's easily faster than any other note-taking client I've tried (and I've tried all the popular ones).
Basically, I expected a binder with a few neatly organized notebooks in it and got some post-it notes instead. Useful, but different.
Another bit of Google-related news - for a long time now (read: a few months) there has been rumors that Google was working towards a unified messaging service. Currently, Google hosts Messenger, Talk, Hangouts, Email, and text messages all under different roofs (unless you have Google Voice as your primary phone, you could have gotten everything but messenger from gmail.com - but almost nobody has that). Anyway - rumor has it that this new service will possibly be named "Babble" and will be announced in May during Google I/O. I sincerely hope the first rumor is false and the second rumor is true. I look forward to what I have called in the past "A grand unification of technology".
Google's Coverage of march madness has been stellar. This is a screencap of the "March Madness Bracket":
You can skip to here if you are technologically apathetic.
Speaking of March Madness:
26 definitely incorrect picks. 20 definitely correct picks. 22 games up in the air.
I have been thinking about my immune system a lot lately. The metaphor I can't get out of my head is that my body is a fort - surrounded by a wall (skin) with millions of trained soldiers (white blood cells) defending the sanctity therein. The soldiers generally do a good job. I went 7 or 8 months without a down day until two weeks ago, when a Trojan Horse was parked outside of the walls of the castle. The soldiers weren't trained for large wooden horses and did the dumbest thing possible. The horse was let in. That night, the virus leapt from the belly of the beast. Once inside, the sacked and plundered heavily as my little trained soldiers fought with all their might. Eventually, the flu was stricken from the castle (I got tired of calling it a fort) and normalcy returned to the villagers (I got tired of calling it a castle)... but the history books will forever show that the flu once had it's day.
But the metaphor continues -
I have a mole in my army - in training division. The soldiers are being trained to attack my temple (I got tired of calling it a village) they were created to protect. There's a medication keeps those overzealous fighters in check - if, you know, you don't get the flu and miss a dose of a medication you only take once every two weeks.
Having just said that - I got some practice with Photoshop today. It was the first measurable step I took towards my ultimate goal of making awesome movie posters. I had never used photoshop before - but I'm proud to say I think I picked it up pretty alright. I went from zero experience to this picture within 100 minutes: 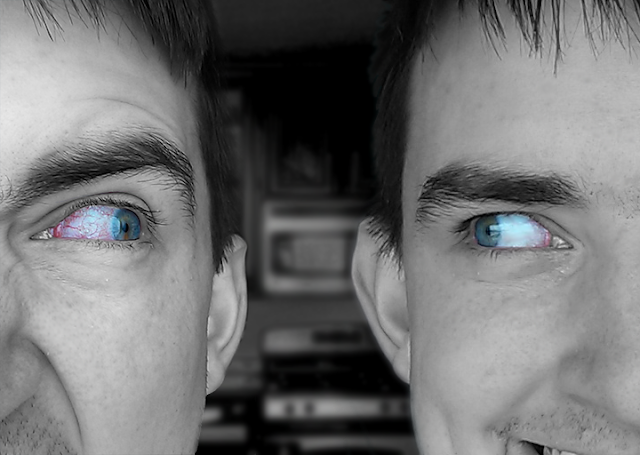 About that left eye - it's going to be taken care of. Don't freak out.

Top 5: Things I wouldn't normally expect myself to say... but can say right now
5. I want to work out
4. I want to go grocery shopping
3. I need to start packing for my trip to Asia
2. I want to eat a salad
1. I need go get a base tan - I should fake bake

Quote:
“ I want to be standing on a mountain top with an American flag fighting off bears ”
- Jon -