I have a lot of time to kill before I can put a wrap on this post. I just started the render for the updated version of my second-a-day video. This post is being created specifically to showcase the video because, as of this writing, I am exactly 24 1/2 years old… which means my video is exactly half finished. In an hour and twenty minutes, I’ll upload it to YouTube. When that upload gets done (probably another hour, at least) I will put the video right below this line. For you, it’s been there this whole time.

(this video lost to time)

This has truly been the longest I’ve ever worked on some project that was “just for fun”. Unless you count skateboarding. I did that for 7 years. Some people are professional skateboarders after 2 years. Took me 7 to get somewhat competent. Skateboarding, though, is what introduced me to making videos. As you may know, all real skateboarders have to be on camera so they can be seen skateboarding; otherwise, what’s the point, right? Putting together my first skateboard video started a chain of events that eventually led me to filming something every day for a year. This project was a relatively large undertaking when I started it. I didn’t honestly think I’d be able to keep it up. But I have, and I’m glad. It’s one of my favorite things I’ve ever made.

I think that video works best for me. Other people might like it… but I’m the only person who knows the other people in it, who went through the events documented, who has the memories. Everyone should do something like this. It’s fantastic what you do in half a year.

I will now provide an very incomplete list of some comments for some of these seconds:

August 1st - My birthday. I just got that shirt.
August 2nd - A marshmallow was rubber banded across the room and into his mouth.
August 4th - I move back to my parents house.
August 6th - I built that desk.
August 8th - I had a very twisted ankle during that shot.
August 11th - Melissa moved to Topeka.
August 15th - I see Molle for the first time since I help Jon pick her up.
August 19th - In the Google Fiber headquarters.
August 20th - JIFF GIF gets 1 million views… somehow.
August 23rd - Yes, that’s the real big wheel.
August 27th - At the GOOGLEPLEX.
September 2nd - Kansas City Irishfest.
September 4th - I don’t know about bears… but I sure do.
September 12th - I sign my first lease.
September 15th - …and move into my first place on my own.
September 24th - First day of work at my big boy job.
September 28th - First weekend bash in the penthouse. (side note: I need another one of these soon)
October 2nd - Testing out remoting with my Nexus 7.
October 5th - The First Minute To Win It night (I won).
October 6th - The only time Ben is in the video.
October 11th - Melissa’s first student teaching concert (she did fantastic).
October 13th - First time ever in a casino - lost $20.
October 23rd - That’s the column! You’re reading that one’s great great x24 grandchild!
October 26th - Alissa’s dress rehersal.
October 27th - Alissa’s reception (and Jon’s famous dance).
October 31st - Halloween as Highland Breau - and Danielle & AJ learn to shoot guns.
November 2nd - The video makes an appearance in itself.
November 4th - Rock Chalk.
November 7th - 007 night at my buddy’s gun store.
November 8th - Labs got did (I did this earlier today, too. Only reason I mentioned it).
November 11th - The girl I’m dating is beautiful.
November 14th - Even though I’m 15 minutes early, I’m 15 minutes late.
November 16th - Merrily We Roll Along at KU.
November 18th - Second day of spades in a row (we won, again).
November 20th - Hangout with the Hill tribe
November 21st - I missed that.
November 27th - The Nexus 4 is back on sale - and I get it!
November 28th - Nick’s fiance is so much cooler than he is.
December 1st - Horse parade on Mass Street.
December 2nd - See comment for November 11th.
December 5th - I was stuck on that elevator for 45 minutes.
December 6th - Second (and last, hopefully) time in a casino, I won $60.
December 8th - Dave and Buster’s (I won).
December 10th - I get my new phone and cry tears of happiness.
December 13th - Weekend penthouse bash number… I don’t know. Three?
December 18th - Mom and aunt Margie shared a triple chocolate meltdown; I had my own.
December 21st - The game of life that lasted a lifetime.
December 25th - The first Christmas where Leo knew presents were coming.
December 26th - Mom, Dad, Amy, & James laughing at me in an old family video - “Screen!”
January 1st - Welcome 2013!
January 4th - Minute To Win It #2 (I won 3rd place)
January 7th - My first work trip.
January 13th - Melissa and I’s last day together before she left for Thailand.
January 18th - I love Google.
January 20th - M-I-Z… Z-Oh You’ve gotta be kidding me.
January 21st - Second work trip.
January 23rd - My first bar trivia. Nick is still not cool.
January 24th - Ricki and Lia wanted me to touch the ceiling on an escalator.
January 26th - My dad in my Christmas gift from Jon.
January 27th - Molle got HUGE.
January 28th - My most recent of many outings with Danielle and AJ to watch the Hawks.
February 1st - Halfway done. Me editing the video makes it into the video. I love Google.

I’m not sure if that was at all interesting to anyone. But that’s okay because I did it for me. Most of this blog is done for my own amusement, anyway.

In other news, I had a highly productive day and I celebrated by eating a whole Digiorno pizza.

Did you catch my movie/tv show/song/book reference? I like hiding these things in plain sight. If you didn’t spot it, this link is to YouTube and should give you the answer.

Because I want a picture to show up on the mobile version of the column, I need to post one. Here’s the picture I sent to Melissa when I first tried on my usher’s shirt and tie for Amy’s wedding: 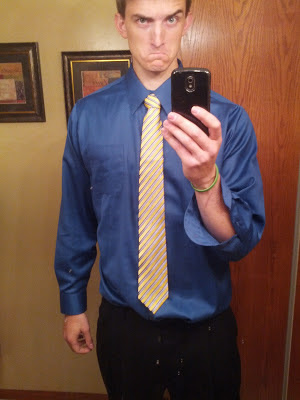 The standard face I make when I know my photo’s being taken.

Top 5: Reasons I need to be in bed