Motto: “That which goes up, must also come down” is a wildly inaccurate statement.

About the motto: first off, “up” and “down” are dependent upon your frame of reference, but even if that wasn’t the case; there are jillions of examples of things that go up without coming down. Deep space probes. All the various equipment we left on the Moon. The Moon itself was likely part of the earth at one time, it went up. Pixar made the movie “Up”. I don’t see them making the movie “Down” at any point in time. Most buildings and satellites that are currently “up” won’t be coming down at any point in our lifetime. A more accurate saying would be “That which goes up, is quite likely to come down”. Perhaps, to keep the meaning of the saying, it should be “If you are happy or in power or in any other way emotionally lifted you should probably enjoy it, because it’s not happening for forever.”

Keep the tradition of that which goes up, must also come down: Microsoft. I read a looong article last night about how they are slowly circling the drain. In a way, it made me happy. I’m likely going to live to see a major regime change take place. The way things have been is not going to be the way things will be. Change is good.

Change, actually, sucks. Pennies are now more costly to manufacture than the value they hold [citation needed]. Nickels and dimes don’t carry enough monetary oomph to continue carrying around. Coinstars are the saving grace for change, and they take a cut of your money as a processing fee. Physical money is wildly inconvenient in most modern-day official circumstances. The only thing I use physical money for are Turnpike fees and buying those Girl Scout cookies the other day.

The more I follow tech news (and news in general) the more I think of big corporations as little children on the playground, fighting over their turf. One such example: when Apple’s iPhone 4 first came out, it had an antenna issue. If you held the phone in a certain way, the signal died. What was their response? They had a public demonstration of how you could do the same thing with some other phones made by other manufactures. It was very much a “Well I saw Timmy doing the same thing last week!” way of getting out of trouble. They eventually admitted their fault and offered a $15 compensation for those affected, if you took the necessary steps. Google screwed up the Nexus 4 launch from any logical person’s perspective - and they haven’t so much as said a word. I used to employ this technique in relationships all the time. If I screwed up, I wouldn’t admit fault or talk about it and I would wait for the issue to go away by itself. I’ve long since realized this method doesn’t really work. Samsung and Apple are having an all-out “he’s copying me” “no I’m not, he is!” war. Same could be said with Apple and most other companies. They are being particularly prissy about the whole ordeal. Long story short, corporate America… grow up.

Lately I’ve been slacking off with my whole “life betterment” deal. I lost my little running daily checklist last week. That, in turn, made me lose my focus and drive. I had a baaad week in terms of being “healthy”. My place got disorganized. I didn’t work out much (at all). I didn’t learn or practice anything useful. I didn’t use time effectively (at all). But, on the upside, I DID manage to keep a few things going… I saw my family and talked with friends. I wrote some. I drank water. I kept my video-a-day project going.

My posts have all been monstrously long as of late. So I’m going to end this one now. 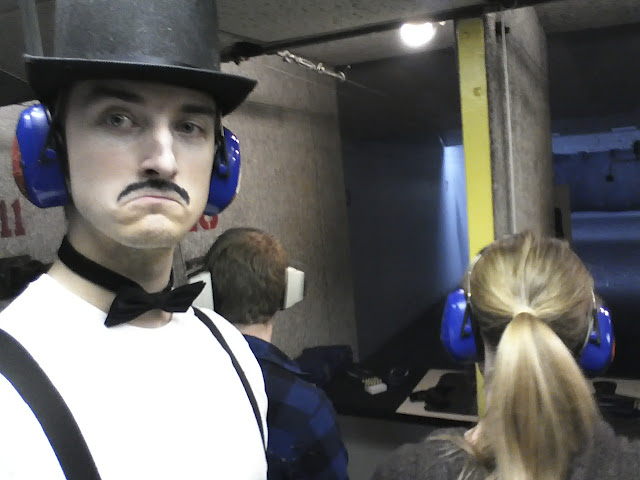 I couldn’t think of a photo to go with this post, so I present to you this photo from Halloween.

Those all turned out to be 2 by coincidence.

“This is the coolest library I’ve ever seen. You have to come!” My loveably nerdy girlfriend