Motto: JARVIS, minus most of the utility.

Voice assistants are a large part of technology today. They are arguably the most prominent place where technology brands get to flex their artificial intelligence muscles, and where they literally give a voice to the company.

In late 2011 the “S” in the newly released “iPhone 4S” supposedly stood for “Siri”, because that was the phone that introduced the general public to the concept of a ‘voice assistant’.

In 2015, Microsoft integrated Cortana into Windows 10 and the Xbox. Nobody cared.

In 2016, Google officially debuted the “Google Assistant”. This was their first “official” and unified take on voice assistants, although variations of concept were already widely in use by various Android OEMs.

In 2017, Samsung introduced their voice assistant, “Bixby”, on their Galaxy line of Android phones. Really nobody cared.

Bixby and Cortana will not be mentioned again in this column (or perhaps by anyone anywhere).

There are plenty of valid reasons you may choose to not have a smart speaker in your house. You could have privacy concerns, don’t want Alexa listening to you and serving ads based on what it hears. You don’t want your kids to be influenced by them. You don’t agree with the value proposition.

All three of the legitimate competitors essentially have feature parity. Alexa and the Google Assistant are almost a copy/paste of one-another. Siri is the most different, but that isn’t necessarily a good thing or bad thing. Siri is local-first in some use cases, whereas everything Google and Alexa does a round trip thru the cloud.

The unfortunate answer to “which is the best voice assistant?” comes down to a matter of personal taste.

If you say Alexa is best, that’s a fair and valid opinion.

If you say Google is best, that’s a fair and valid opinion.

If you say Siri is best, that’s a fair and valid opinion.

If you say you no thanks to all of them, that’s a fair and valid option

If you look up a litany of comparisons, you’ll find one majority opinion is pretty common.

Google is best at answering questions. Alexa is okay. Siri is the worst.

Meanwhile Siri is ‘the most’ private, whereas Google is a little less private, and Alexa has been outright accused of listening to your conversations to target advertisements.

Alexa has been around the longest, and at this point probably offers the widest array of supported device. Google is next. Finally Siri is the least likely to be supported by whatever random device you pick up at Target.

At this point, I can say I have a lot of experience with all three of the legitimate voice assistant platforms in today’s market. I’d wager I’ve said “Okay Google”, “Hey Siri”, and “Alexa” all about the same number of times, and that number is measured in the high hundreds or the low thousands. Even where I sit right now I can literally say “OKAYGOOGLEHEYSIRIALEXA PLAY HAMILTON” and, if I say it fast enough, I’ll start hearing the musical of the decade playing from 3 different places at once.

For me, having a smart speaker is a net benefit, considered against privacy concerns. I like to play music. I like to find out the forecast. I like to set timers. Sometimes I use them to control my smart home features. Every so often I use them for extemporaneous circumstances1.

At the same time, they all feel like they could be so much better. The reason I have all three ecosystems is because all three of them exist in this Goldilocks zone: 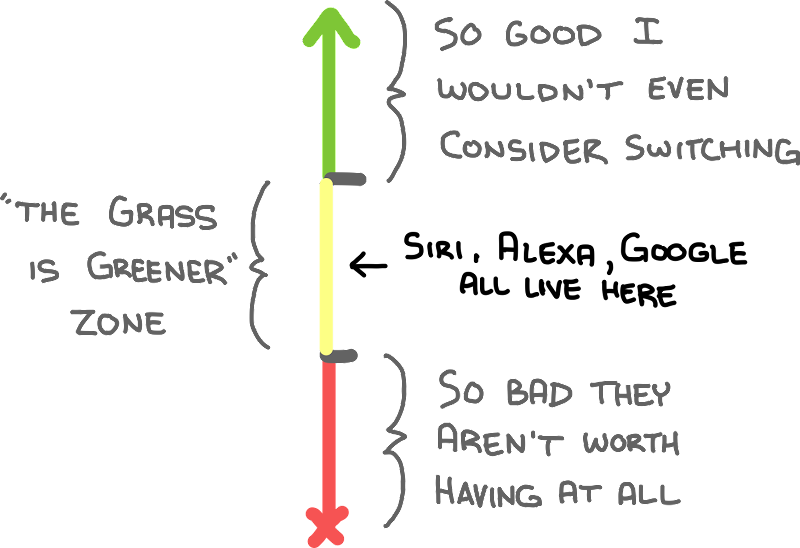 The Google Assistant would be in the green zone, if it didn’t have by far and away the most annoying trigger phrase. I still despise saying “OH KAY GOU GUUL”. It’s just not a group of syllables that feel good coming out of your mouth. I still think there’s a very real causal link between my getting fed up saying “Google” over and over again that made me switch from ‘The Android guy’ to being an iPhone user.

There is (finally) a coming interoperability standard that seems like it will make the promise of “the smart home” into a real reality. Google, Amazon, and Apple (amongst others) are part of a group working on a technical spec (called ‘Matter’) for internet connected device standards. This would give device manufactures the ability to create products that seamlessly interact with any of the three major voice assistants without writing custom handling software on a per-vendor basis. Today, you have to check on a device-by-device basis to see which of the perspective smart home features you’re looking to buy into to see if the developer has built-in support with your smart assistant of choice. This also opens up the ability for more creative cross-device interplay, because standardization enables creativity.

Big List of Thing about which I Couldn’t Care Less

This is an incomplete list of things I don’t think about, don’t worry about, and definitely don’t want to talk about with the person next to me on the bus.

Some topics include obviously rhyming words. Using these isn’t “bad” necessarily, but don’t pretend like using any of these is impressive.

Admittedly I used this one the other day when I made up a jingle to get my 1 year old into the car.

Use this if you want, whatever floats your boat I guess.

Dr. Seuss even falls into this one.

Looking at you, Reading 🌈