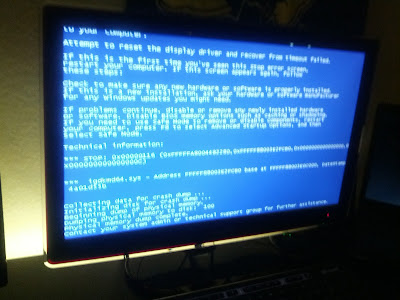 My current computer is crashing on a multiple-times-per-day basis now. It’s a little over 4 years old and has been needing to be put to rest for a while. Given that I know technology and what-not, I’ve decided I am going to build my next computer myself. Seems obvious now, I don’t know why I didn’t think of it before. It’s going to be built specifically to suit my needs. This essentially means I’m going to build a computer specifically for video editing. There will be more on this at a later date… I have a couple of Nexus devices I want to get before the computer time ever comes.

Having a job and money is so much better than college was it’s not even funny. Whoever said “college is the best time in your life” must have not went through an engineering program. Don’t get me wrong, college as great… but would I rather be doing that than what I’m doing now? No fricken way.

As with any rule, there are exceptions… as evidenced in the following sentence: My darling dearest dined on some delightful and delicious donuts.

In order for my title to work out, I’m going to have to talk about life, the universe, and everything… I think rather than doing that, I’ll cop out with the following:

I was never a fan of the board game “life”. Those who die with the most money still die. The universe is big. And Britanick’s video entitled “everything” is hilarious, if a bit not safe for work. Something mildly interesting I found out during the writing of this column: “Coldplay” has two different songs whose titles could be considered direct references to The Hitchhiker’s Guide to the Galaxy. Huh.

I get the feeling that the 2 people who read this don’t take the time to go to the links I put on here. I might dial those down a bit for future columns if nobody objects.

Oh, I watched “Skyfall”. It’s good. I recommend it. There’s something so endearing about a timeless character like James Bond. As I was telling Melissa, in many ways Jason Bourne came up and smacked James Bond up and down the block. It’s pacing and action sequences were unmatched and really outshined any Bond flicks… but Jason Bourne will never be the character James Bond is. He just won’t.

Top 5: Favorite quotes from Hitchhiker’s Guide to the Galaxy series (or what I’ve read of it)

“This cheese is so cheesy” Melissa