Checking back in on a few themes.

Here’s where we’re at.

I started my last post off with a section about change and how everyone I know is in the midst of some big life-altering change. Well, I’m here to talk about change again, but from a wholly different perspective:

It turned out I loved being in my 20s. That’s quickly approaching “not even the recent past any more” status.

What I can’t believe is that before I turn fifty I will get to live another day for each day I have been already been alive. I will have at least my current level of understanding and faculty, my current level of independence and capability. - me at 25

Well I was wrong. I hope I wasn’t wrong about the quantity of days I’ll be living again - I’d certainly love to make it past 50 - but about how those days would be lived. Here’s a point-by-point takedown of what I wrote nearly 8 years ago.

Such is life. You literally cannot have it all. I am incredibly lucky that I was and am capable of choosing the path I walk. And every day I wake up next to the person I wake up next to, and see the boys I choose to bear, I am reminded how good of a job I’ve done choosing my life thus far.

My children are growing. I’m still getting used to the concept of even saying I have children, and yet one of them is talking up a storm and the other just started crawling a couple weeks back. Literally every day I think to myself “soak in this time, you won’t be able to do this again”. I love my boys, and I know I’ll love the men they grow up to be - I’m just not ready for it yet.

Again, such is life.

We painted our current house. It looks very different now and I like that. Makes me want to immediately make a similar change to our new house whenever we move in… if we move in. There is no reason to think we won’t, but circumstances near me have reminded me just how quickly everything can go sideways.

Google Drive (& Photos) remains the sole reason for our continued “trial” qualifier on Melissa & my big trial switch to all-Apple services. You’d think a guy who writes about future-proofing your files would be better-prepared for something like this. Alas, the problem is bigger than “particular preferred formats” - it’s a total change in mindset.

The “Google Way” is to have all your stuff accessible in their servers, associated with your account. If you want to download static copies of your documents, you’re welcome to do that… but the canonical copy will reside squarely online. If you’re sharing a Google Photos photo with someone, you’re not creating a “copy” of that photo and sending them the copy, you’re adding their name to a list associated with the photo’s URL that says “this account can see this content, too”. I do really like this approach. It’s elegant and scales well.

Beyond that, they have trained us to just keep everything. Don’t bother organizing photos or pruning out things you may not need in the future, because who knows what you’ll need and you’ll be able to find whatever it is thanks to their image recognition search interface, which is truly second-to-none.

Plus my password manager tells me I currently have 109 log-ins using my gmail account. So there’s that, too.

Microsoft is moving on from Windows 10. They are introducing a genuinely big visual overhaul. The start menu isn’t in the bottom-left anymore, for one. Their building teleconferencing into the Operating System. I’m just not sure how on-board I will be for that. I don’t love the fact that there are so many people trying to become “the” teleconferencing app of choice for regular consumers. Let’s Facetime/Zoom/Hangouts/Duo/Meet/Skype/Teams2 about it sometime.

In the meantime, I’m expecting to this desktop PC to give up the ghost sometime in the next 1-2 years. Who knows what will replace it.

And now, for something complete unrelated.

An Idiot Who Ruined a Race

If you’ve got nothing nice to say about someone, don’t say anything at all.

I have nothing to say about this idiot: 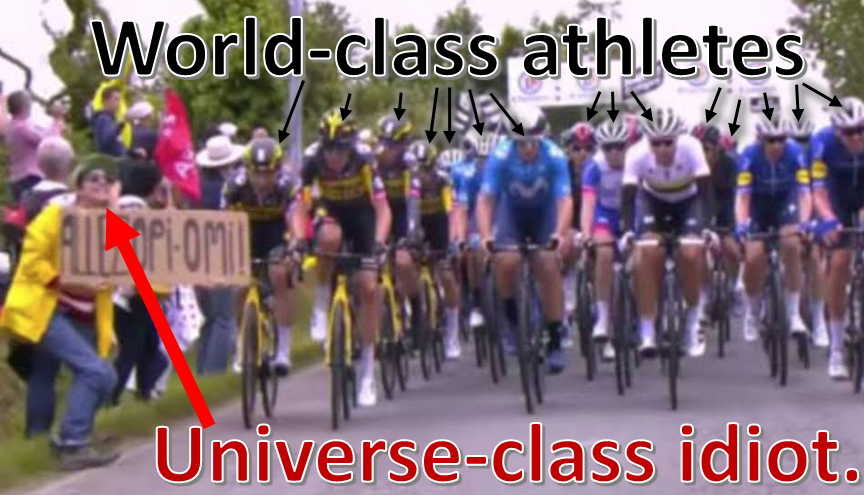 For posterity: In case this doesn’t have the Zeitgeist-impact I expect it will, this idiot wanted to send the functional equivalent of a “hi mom!” message to her grandparents. So she stepped out onto the road in front of the most famous bike race, stuck her stupid sign literally in front of the race made herself unavoidable, and caused dozens of bicyclists to crash, several injuries, including at least one person who had to drop out of the race entirely.

I don’t really care about bicycle racing or the Tour De France specifically, but I do immensely care about months-to-years of grueling preparation by many people in service of their life’s dream, wasted by an idiot who wanted to be on TV. I hope this individual is identified, shamed publicly, and subject to whatever consequences those in charge believe to be appropriate.

Hey! One of these I’m going to finish soon.

Data. Data parsing. Databases. The internet. Triangles. Infinity. Articles about all of those things are at some stage of development.

This project is heavily stalled at the aforementioned Google Drive → iCloud step.

“Moving” is typically considered one of the Top 5 most-stressful life events, depending on which source you trust. There’s a lot to it, on both sides.

I have a Glitch & MongoDB-based Webapp that is nearing feature-completeness. It has been my “Life Tracker” for the past year+ now, but it’s still missing some things. Namely the creation of wholly new types tracked things is not simple. Importing data remains fairly unintuitive and tedious. And there is no user interface for “drawing charts” yet. All of these things are on the cusp of being developed.

The next logical extension of the “Data Journal” is the complete abstraction of the concept from the specific services that support it. Frankly I’ve done a pretty okay job of keeping the programming modular, but it remains pretty tightly-bound with its current setup. I want to package it up and make it more portable for better future-proofing. Also I want to write it in Python, just as an excuse to finally use Python for something.

I apologize for such a long Column - I didn’t have time to write a short one. me, channeling my inner Mark Twain