I pride myself on my ability to be wrong. I’m quite talented at it. I am wrong frequently. More importantly, I freely and fully admit to wrong. I own up to it. It’s how you grow as a person and learn. I am not so naïve as to think Aaron today has everything figured out and I’ll more or less be the exact same person in 15 years (I imagine I’ll probably be quite different within 15 months). Times change. New facts and insights are gathered. People grow.

Recently, I realized I was wrong.

On this topic, not only was I wrong, but my wife was even more right than I realized. Now I see the light.

That one little “s” makes all the difference. My whole life I’ve seen monthly calendars where the week starts on a Sunday. Sunday is the left-most column. Then you get the week. Then you hit Saturday. Sunday was one weekend, Saturday was the other end. Sunday and Saturday are the week ends… as in both ends of the week.

But this is BLATANTLY wrong. The first day of the week is Monday. It’s the obvious way to do things. It’s how the world works, for one, and beyond that - look at how the days of the week are named…

THUR → two letters away from → FOUR

And the last 3 all start with the correct letter:

I was an idiot. Now I’m still an idiot, but slightly better on this topic. That world-view has served me well.

Melissa and I met in 2009 as two very different people. We’ve both changed and grown a ton in the subsequent 11 years. Lately more than ever we’re finding interests that overlap. It’s pretty awesome. I think we’ve both seen great success in things the other has done and we’ve both pushed each other.

I added some stuff to the home page of this site - adding some new “Secondary Features”: 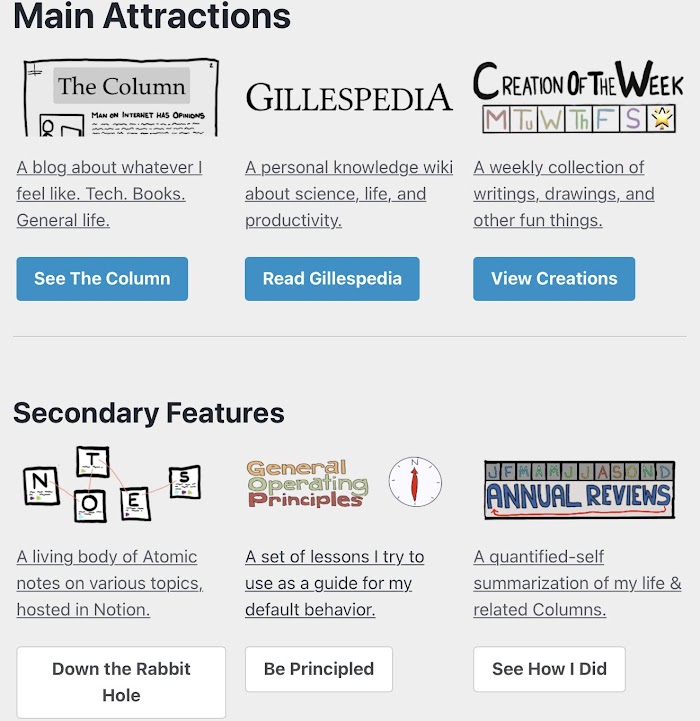 Probably nothing more needs to be said that what’s contained in that picture.

Hey reader. You can probably just skip to the next major heading.

Google Apps Script, the coding environment that allows you to play around with Google’s main applications using JavaScript & host WebApps got a MASSIVE upgrade this week. I’m excited.

Basically I learned how to write JavaScript using the old Google Apps Script Integrated Development Environment… and that’s quite a feat because it was, to be nice, not on par with any other IDE out there. Even the Visual Basic for Applications editor behind Microsoft’s Office lineup was better, and that’s a low, low bar to clear.

Anyway the new editor looks to have most of the basic niceties that anyone with experience in a modern IDE would come to expect. Things like finding where variables or functions were defined, seeing Intellisense-like auto-complete suggestions that actually tell you what they are, code folding, and a right-click menu. It’s also supposedly faster and easier to debug & deploy things in the new environment. I can’t wait to get my hands on it and start tinkering around.

Question of the Month

I think I got Incepted recently. Someone slipped into my dream and whispered “hey… you should do all your tracking stuff all differently.” This is a common occurrence.

Should I continue to build out my Data Journal using Glitch + MongoDB? Or should I use AWS? Or should I go back to Google Sheets & Apps Script? Or Google Cloud & Firebase? Or a cloud PosgreSQL provider? Or go all-in on Airtable? Or just wait for the Notion API to open up?

Ultimately, I just need a consolidated place to store data of a certain type over time, to query those data, and aggregate them in various ways. Basically I’m standing up my own personal data warehouse. How about that?

It’s all overkill. You don’t need to do anything nearly that complicated to get a massive amount of value from this sort of exercise. See my Top 5 below for more. What I want to do is make something that can be helpful for people other than me. Whether that’s providing a turn-key solution, or providing a really well-thought-out starting point for other people with some level of coding experience to pick up on… I don’t know.

The neat part is, I know I’m capable of delivering either.

Disclaimer: I’ve done only 3 Apple Fitness+ workouts, and all of them have been half-hour yoga sessions. I’m also wholly incompetent and nobody should trust me. Enough CYA?

The on-screen heart rate & ring progress are cool. The app integration with the watch is seamless and make the whole experience neat. I like the idea that they have different varieties of workout that allow you to filter by workout type and duration. I like the workout types they have. It’s a good cross-section of “fitness”. They also work well with what are some of the most common pieces of at-home gym equipment.

I get that Peloton is a big huge success and that Apple is basically just mimicking them here with the bicycling, rowing, and treadmill workouts… but what I don’t get is why either of them are successful. I’ve never tried it, so I clearly have no ground to stand on. From an outsider’s perspective, though, the workout videos would just be a trainer saying:

I’m sure that’s not what it is. But that’s what I like to picture. The “meh” is purely a matter of taste.

I don’t have an Apple TV (like most people). So I’m stuck watching a workout video on an iPad propped near the TV. That’s dumb.

“Working Out” vs “Training”

The workouts are all independent. They are meant to be accessed at random and performed in any order. This is good from an ease-of-entry perspective, but it also makes me feel like the whole thing is haphazard. You’re not “building” on anything if any given workout could be somebody’s 1st workout ever.

Unless I’m missing something, there’s no quick and easy way to determine how difficult a given workout is. You can preview the video some, but I find that to be mildly helpful at best. So you sort of just, jump in, and hope it’s around your level. And, thus far, I’ve not found anything even close to what I’d “ideally” use.

The 3 yoga sessions I’ve done I’d classify as “probably too easy”, “definitely too easy”, and “holy cow this isn’t doesn’t even count as a workout”. I’m not a yogi or anything, but I don’t need an “introduction to downward dog” again. I’m well acquainted. I get it. Let’s go.

Where do you hurt? What have you done to mange the pain? This information is incredibly helpful for doctor’s visits.

4. Eating Out &/or Drinking Alcohol

Both of these things are fine (actually quite nice!) when done with proper moderation. Did you eat out today? Did you drink? Bonus fun: where/why/with whom?

3. Some Tangible, Measurable Part of Your Journey Between “Who I am Now” and “Who I Want to Be”

Put a nightly entry into a notebook or a calendar. Send yourself an email. Fill out a Google Forms web form. Make a Survey Monkey for yourself. Whatever. Just unload some thoughts about the day and what it was like.

At least annually. According to however you define “Fitness”. See my post on this topic1.

Life instantly improves when you don’t blame other people and focus on what you can control. James Clear, via his newsletter, the only such newsletter I voluntarily receive