EDITOR’S NOTE: Suddenly all the images from the past (many) Columns are broken. My image host solution (Google Photos) is NOT working for me at the moment. I’ve attempted to fix the issue for THIS post, but the older posts will stay broken until I find a better fix going forward.

Eagle eyed readers will note this is the 2nd time I’ve posted a “#399” Column. I had my numbering off upon closer examination (in preparation for my 400th Column celebration… see next time). The number has since been fixed, which means you probably got duplicate email notifications for the same post on subsequent weeks. My bad. I get bothered by inconsistencyes and misteaks. That shouldn’t be a surprise to most of ewe.

There are 3 levels of Apple One. All of them get you Music, Arcade, and TV+. They also each get you some level of iCloud storage, ranging from homeopathic1 amounts of storage, to legitimate amounts. The highest tier grants access to a couple other services as well.

If you don’t know what they are.

Another Matrix of Technological Coverage

Turns out I make these sorts of lists frequently (example 0, example 1, example 2, example 3, and example 4). 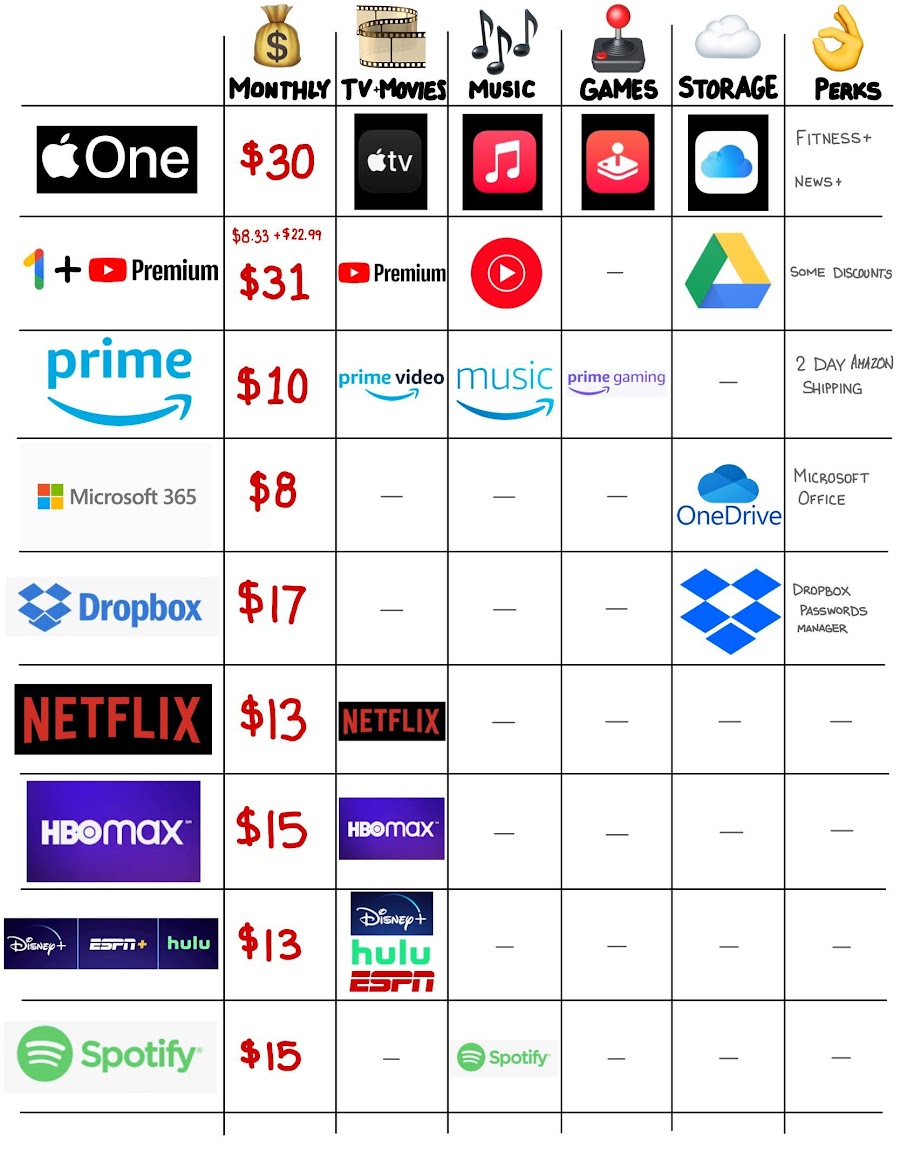 Note 1: this assumes you have a family of at least 3 people to consider & no pre-existing service lock-in.

Note 2: there are a ton of other details and decisions I had to make when putting that graphic together. For example, I elected NOT to include the $5/month Android Gaming service “Google Play Pass”, because, well frankly it doesn’t sound interesting to me personally. This is my blog get over it.

Note 3: I intended to build a much bigger table than this, including things like Software-as-a-Service, specialty services like virtual fitness club memberships (e.g. Beachbody), videogame platforms (e.g. Xbox Game Pass), and potentially even physical goods (e.g. Blue Apron, Hello Fresh)… but then I ran into the logistical problem of graphics getting too big to be readable. So I had to draw a rather arbitrary line.

This whole post lead up to this analysis. I’m going to use it as the Top 5. See below.

Other Apple Announcements from the Event

Since the introduction of the iPhone 11, Apple has been doing a new thing: they are putting out really solid “cheaper” alternatives to their top-of-the-line products. The iPhone 11 isn’t as good as the iPhone 11 Pro, but it’s darn good. Now the iPad and Apple Watch are getting theirs.

The new 4th gen iPad Air is an iPad that looks like an iPad Pro, gets you a stellar processor, gets you the thinner bezel, grants you access to the Apple Pencil gen 2 (which is by far and away better than gen 1), and gets you USB C connectivity & charging. Although there are a few “gotchas” (see: 64gb base model, lower refresh rate, touch ID vs Face ID), the $600 iPad Air seems like it’s probably “the iPad to get”.

I wouldn’t be surprised to see this selling like absolute madness this holiday season.

Unless you have medical conditions that EKGs and/or Blood Oxygen readings are good for, the $279 Apple Watch SE seems like it’s “the Apple Watch to get”. Call me crazy. Always on screens just aren’t important enough.

I guess that’s all I had to say about that. I’d like nab up one of these at some point.

One last thing I wanted to mention - in my previous post about the tools I use, the 3rd digital tool on the list was “Todoist”. It’s a task management application, and frankly it’s a really good one.

Yeah we stopped using it last week. The annual subscription was due, and I looked at the built-in “Reminders” app on my phone and thought “what does Todoist do that this app doesn’t do?”. Not much, honestly. That’s not really to say that Todoist is bad, it’s just that Apple made their Reminders app pretty good.

We’ve been using Reminders exclusively for the past couple weeks and, I gotta say, there’s really not much of a dip in my day to day GTD efficacy. The few things that Todoist does better (more nested projects, more integrations on the web, and the ability to filter based on task assignee) are basically offset by the things that Reminders does better (great integration with Siri, location-based reminders for free, legitimate integration with iOS Shortcuts). For now, I’m quite contented.

Todoist is still my main recommendation for anyone who doesn’t always have access to their phone… but if you do. I reckon the Reminders app is worth a shot.

Pick all the things. Why choose?

Honestly the old standbys are the defacto solutions for a good reason. Rotate between Netflix, Hulu, and HBO Max each month. Get Amazon Prime, Spotify, and use Google Photos and Google Drive.

Pair the new “Apple One” subscription with Amazon Prime. You get music, storage, Apple TV, and some other neat perks from Apple, you get Amazon Prime Video to bolster the Apple TV catalog and get that 2-day shipping.

Amazon Prime for movies, TV, and music. Google Photos and Drive. Two subscriptions. Covers most needs well enough. Not including YouTube Premium drops the Google services from $31/month to just over $8/month.

There are a litany of free options available to everyone that aren’t included on my table. Utilize Google Drive’s generous 15GB of storage for your documents & non-media files. Utilize Google Photos “standard” resolution for your photos and videos. Utilize YouTube (with ads) for your streaming entertainment. Utilize Libby and apps like that for access to Audiobooks. Utilize Spotify’s free tier (or any music streamer, really). This barely scratches the surface of the free options out there.

Really? You JUST got me started using Todoist.
My Wife, after I told her I wanted to stop using Todoist and just live inside of the “Reminders” app