This Wednesday (8/12/2020) was the series finale of Marvel’s Agents of S.H.I.E.L.D. If you’ve never watched the show, which frankly is all of you (except maybe ~2?) just go ahead and skip riiiight down to that Top 5 and quote. They aren’t related.

The debut of Agents of S.H.I.E.L.D. on ABC back in 2013 was tied in with probably my highest Marvel Cinematic Universe hype. This was back when I was making spreadsheets to track the in-continuity storyline. This was back when I bugged my fiancé about superhero shows incessantly. Believe it or not, things are actually very different now… but this Column isn’t about now, it’s about S.H.I.E.L.D., and my relationship to it.

The concept that came with this show was one of a television show that closely tied in with a series of movies, in real time. They were to play off each other, storylines weaving back and forth between them. For the first couple of seasons, that was still (essentially) the promise. Sometime around the introduction of the Netflix, it started to dawn on me… “it’s all connected” had a huge asterisk.

It was somewhere around this realization that I sort of “gave up” on caring too much about Agents of S.H.I.E.L.D., or Daredevil/Jessica Jones/Luke Cage/Iron Fist/The Defenders/The Punisher on Netflix, or The Runaways/Cloak and Dagger on Hulu. 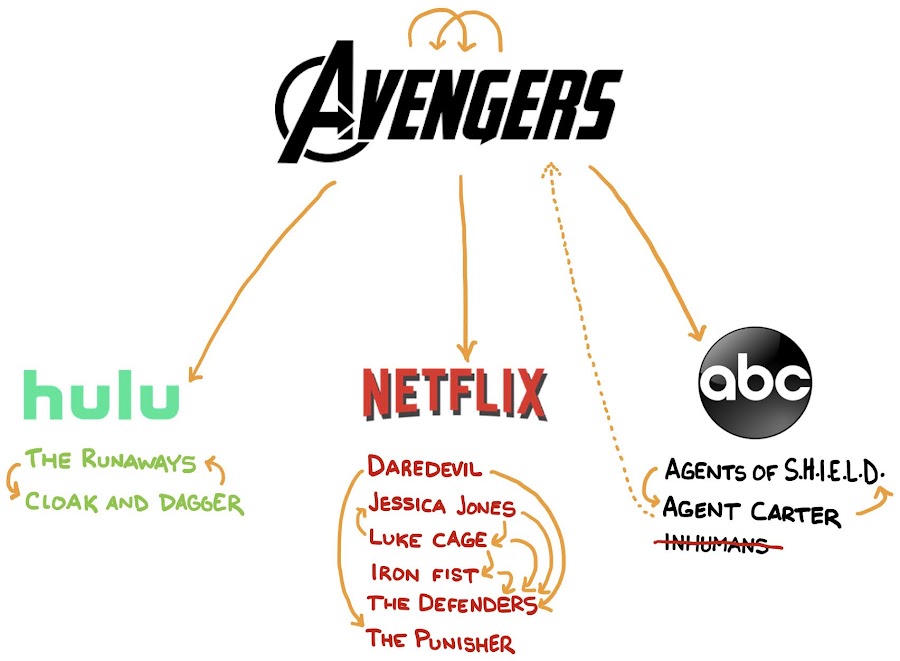 That dotted line between Agent Carter and the Avengers movies is Edwin Jarvis. The actor that was cast to play him in Agent Carter DID show up and have one speaking line in Avengers: Endgame.

I want to see a graphic like that, but more detailed. All 23 movies and all 29 season TV shows, with arrows between them representing direct references. Something more substantial than a throwaway line. Nothing in Doctor Strange cares about Guardians of the Galaxy Vol 2, for example. Maybe I’ll work on this in my spare time at some point. I’ve only seen 25 of those 29 seasons.

It LOOKS like the Disney+ shows are going to be first-class citizens of the MCU. I read somewhere that Kevin Feige outright said that plotlines from the shows will be addressed in later movies. So maybe I’ll be on board for those.

Agents of S.H.I.E.L.D. was a dense show. One thing I always appreciated about it was how quickly they moved on. Things other shows would turn into an entire season tended to be 3 to 6 episode arcs. There were so many, I think I’ve forgotten about most of them.

S.H.I.E.L.D. was such a weird show. A mix of really great twists you genuinely didn’t see coming tossed in with the most obvious tropes ever. It would bounce back and forth between being genuinely great, and genuinely embarrassing. It was, on the whole, worth the watch. I don’t know if I’ll ever revisit all 136 It’s a shame the trajectory of the show was so inconsistent.

This was why I wanted to write this post. So I could draw this: The super high rating for the most recent episodes in that underlying graphic (which is from this super handy website, by the way) is more of a reflection of the fact it’s so new. They will tamper down over time.

Your habits aren’t necessarily the best way to solve the problems you face; they are just the methods you learned to use.
James Clear - random selection of wisdom from Atomic Habits, which I just finished re-reading