Motto: The ultimate Nexus of software and hardware.

Today, I write you two columns. A Windows flavor (below) and a Google flavor (here). This is the Google edition. If you are only interested in me as a person (mom) you might as well skip both of these columns, they are sparse on details about my life.

Google was supposed to have a grand unveiling event today in New York, New York; but hurricane Sandy decided for them that it wasn’t going to happen. When I heard the news, I was upset. That is why today, during my lunch break at work when I pulled up The Verge (as I do on a multiple-times-per-day basis) and read the headline “Google’s future now: LG Nexus 4, Samsung Nexus 10, and Android 4.2” I literally yelled a bit with excitedness. The next hour, I read every single piece of literature on that website, on Google’s own Play Store (where I’ll be visiting soon, more about that later), and any other 3rdparty source I could find. Here’s the news and my impressions:

The upgrade from 4.0 to 4.1 brought a solid set of new features. Nothing like the jump from 2.3 to 4.0 – mind you, but still enough that I rooted my Verizon Galaxy Nexus to upgrade it the day of the announcement (more on this later). The jump from 4.1 to 4.2 brings to the table a slightly larger set of improvements IMHO. The highlights, from what I’ve gathered, are as follows: · “Miracast” – probably the most exciting of all the new feature sets is the one that you won’t be able to use right away. “Miracast” is the native ability to send video and audio to a remote client (read: TV) without wires. Here’s what this means: queue up a video on your phone or tablet, send it to your television wirelessly. Open up a game on your phone, the phone then becomes only a controller – the TV gets the picture and sound (basically, The Wii-U). This feature is like Apple’s “AirPlay” and Microsoft’s Xbox media extender – but better. It is an open standard. All third-party vendors can (and soon will) start supporting Miracast. · “Gesture Typing” – Think “Swype keyboard” meets “SwiftKey”. The NATIVE keyboard will now support the best features from both of the two best replacement keyboards currently available (read: the two keyboards that I alternate between). The video showing their implementation colored me very impressed. · “Photo Sphere” – you know on Google Map’s Street View how you can look in a full circle – up, down, left, and right the full 360 degrees? Android’s camera will allow you to take your own pictures using the very same effect. The file format for these photos, btw, is plain old .jpg. Android is again showing us that proprietary technologies are not the only way to live. · Multiple user support – Android tablets will now support multiple users, each having their own settings and their own applications. This is great news for families sharing a single tablet. Kids can have their own profile full of games and bright colors and pictures of unicorns, and their parents can have a separate profile for boring applications and pictures of a clean house. · Daydream, Lockscreen, and notable app improvements – “Daydream” is the feature I understand the least about, not having yet seen a video or read a solid review on just exactly what it does. It has been likened to a screen-saver that may or may not allow for some additional functionality. The Lockscreen (lock screen is officially one word, btw) now allows one to enter the camera or access widgets directly. I’m curious to see the logistics behind how this is implemented without sacrificing device security. Gmail and Google Now have both seen improvements as well. Gmail now allows for zooming (which it hadn’t yet done, for some reason) and Google Now will now (if you want it to) pull information such as flight number’s and package tracking numbers from your email to let you know information that’s relevant to you before you even ask for it. All three of the new Nexus devices will have 4.2. 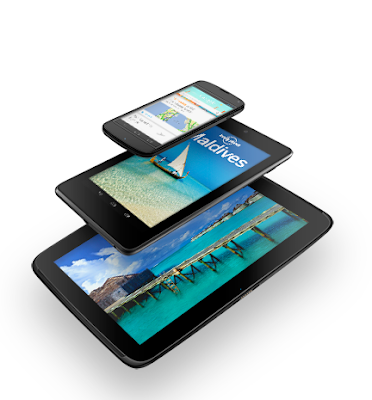 The LG Nexus 4 is the successor the Samsung Galaxy Nexus (a.k.a. the phone I’ve had for the past year). It will ship with 4.2 and a list of impressive specifications, despite one glaring omission (read on) I am getting one as soon as possible. The specs & my impressions:

· 4.7” 720p screen – Android phones are big and getting bigger. This trend I am a huge advocate for because I am a huge advocate. I’m a big fan because I’m a big fan. I am larger than most individuals. My hands, too. This screen has been reviewed very positively by the only 3rd party individuals who have had the chance to see it in person, which is good enough for me. · 1.5 GHz Quad-core Snapdragon S4 processor & 2 gigabytes RAM – “really really fast processor”. Faster is better. Nothing more to say. · 8 and 1.3 megapixel cameras – the camera is reportedly an upgrade from the Galaxy Nexus’s lackluster offering. Admittedly, that’s not hard to do. I haven’t seen any first-hand shots from the camera, but I’m optimistic. Of course, for me, cell phone cameras have realistically gotten about as good as I foresee them needing to get. · Inductive Charging – Charging without wires? Cool! You still can charge with a wire, if you prefer. · Bluetooth, WiFi, NFC, GPS – All standards across the mobile ecosystem, save for NFC. Apple hated all over NFC and set the mobile wallet revolution back several months by electing to forgo it with their most recent iPhone. This angered me. I’m a big fan of the technology. · 2100 mAh battery – this is slightly larger than your average battery for smartphones these days. That’s good, but not excellent. There are definitely phones with larger batteries. But, this battery should fair a bit better than expected based of the next stat… · NO LTE & Limited local storage w/ no MicroSD – these are the catch, the “got ya”, the only things about this phone that leave sore spots anywhere in this announcement. LTE (Long Term Evolution) is the true standard of 4G (at least in America). This phone’s fasted mobile connection technology is HSPA+ (that thing AT&T says is 4G but Verizon says isn’t, the reason they both claim to have the ‘biggest 4G network in America’). This seems like a completely bone-headed move on the part of Google, and maybe it is. But… maybe it isn’t. LTE is fast. It helps burn you through your allotment of data much quicker than any other cell standard. It also diminishes battery life. LTE is so fast that, for many people, it is overkill. I find myself switching off LTE on my Galaxy Nexus on a semi-daily basis to maintain battery and because, unless I’m streaming video over the mobile internet (which I rarely ever do), 3G is definitely fast enough for me. Google forwent LTE for 2 reasons: First, to keep the cost down (more on that next). Second, to keep the carriers out of the way. When Android 4.1 was released, I had to wait MONTHS before I saw an official update from Verizon. By removing LTE, Google is taking the power to delay this release away from Verizon or anyone else who seeks it. I would have gladly given up LTE for that update during those 3ish months. The relatively low local storage is a shame. It is worth mentioning, however, that I have 32GB of storage with my Galaxy Nexus and I am currently using less than 3GB thanks to Google’s excellent cloud integration. The lack of expandable storage is a bummer for which I offer no justification or marginalization. · $299 (8GB) or $349 (16BG), unlocked – this phone will sell unlocked for the same price that I paid for a Verizon-subsidized Galaxy Nexus. For those of you who don’t know phones, that means you can make this phone your primary phone for $300 without having to wait for an “eligible upgrade”. This also means that you can buy it with no cell service at all and use it strictly as an overly-fancy Android-flavored iPod-touch-like device. This price is shocking, I don’t understand how it can be so low. Seriously.

The Nexus 7 is no-longer new, but today, there were announced 2 new variants: 32 gigabyte and the 32 gigabyte+mobile data. I’m not going to do a spec-analysis of the Nexus 7 because I have already done that on a couple occasions. Despite already having the original $200 8 gigabyte variant, I will be getting (a new) one as soon as possible (more on why later). The Nexus 7 is still an unbelievably cheap, unbelievably great tablet. The 16 gigabyte version: $200. The 32 gigabyte version: $250. The 32 gigabyte+mobile connection version: $300 (brief reminder: The lesser-impressively speced iPad Mini is debuting at $330).

The last major announcement of the day was the first full-sized (read: about 10 inches) tablet in Google’s Nexus program. It does away with the Android 3.0-like arrangement of the notifications bar and app drawer; and with that, gone are the days of a phone and a tablet looking any different. The Nexus 10 has a back-facing camera, ultra-super-dooper high resolution screen, and is thinner and lighter than the most recent full-sized iPad. The Nexus 10 has impressive specifications all the way around. I will not be buying one, however, because I’m not crazy and I don’t need 7 inch and10 inch tablets. If I were to buy a 10 inch tablet today, though, it would definitely be this one. I am going to skip out on the detailed specifications for now, because I’ll likely do a head-to-head someday soon that will go down that path and this column is mega-long as-is.

Soon I am going to do my end-all (at least temporarily) review of the technological offerings from Apple, Microsoft, and Google. They will be put head-to-head-to-head as an overall technological ecosystem solution. Mobile, miniature tablet, regular tablet, laptop, and desktop offerings will be directly compared, along with some additional thoughts and other things to consider. This will be the ultimate comparison, and will likely one of the longest columns I’ve ever written (a record previously held by either the California visit or THIS one).

With that, I am off.

Top 5: Things I have to wait for now (in order of when they are happening)

“Google should just pay you to sell Android and Google+ to people” Danielle Fuller said something like this a while back, by the way Google, I’ll await your job offer