This post is going to be an expansion on something I wrote about in Column #354. It will (hopefully) complete the series of posts I've written lately about productivity software, Google, Getting Things Done, and all that. Specifically today I'm writing about Google products, and my growing disillusionment with them. This post will be thorough, longer than most, and generally more well put together.

I'll caveat this up front by saying they are great on the whole, most of my quibbles are just that, quibbles, and that I have them because I'm a power user. I am in deep with Google.

Google Products I Still Use

Google Products I Have Stopped Using

Google Products I've Never Used (but do know about)

What Google is doing right

I could write an entire book about what Google is doing right (and I wouldn't be the first). For the purposes of this post, though, I wanted to include some things that are good, even if they are obvious. This section is not the main point of this post, though.

Google products & services are, on the whole, completely free of charge. Many of them aren't even ad-supported. They just exist so that you will want to stay in the Google ecosystem. You could argue they are all still 100% self-serving, but I'll give them the benefit of the doubt and say that most of Google's products are a net benefit to humanity. Look at Android in developing countries. Look at the millions of people learning how to fix their sink using YouTube, and the YouTube creators making money* for that benefit. Look at the absolute delight that is rediscovering old photos on Google Photos. Look at this writing platform I'm using for free. Look at all the innovations they have made in the realm of self-driving cars, machine learning, and artificial intelligence. I am a firm believer that the world is a better place because Google is a thing.

The biggest problem with Google

Google is a huge ship, with nearly 100,000 employees capable of influencing its momentum. To extend the "Google is a ship" metaphor, there are dozens of tugboats manned by hundreds of employees each, pulling in whatever direction serves their individual interests best. Sometimes tugboats come unmoored and sail off into the sunset (Google Reader, Inbox), other times two tugboats are pulling in completely opposite directions (Google Hangouts vs Google Allo and Duo, Google Keep vs Google Tasks). Google isn't committed to any obvious direction.

This creates uncertainty in what direction Google is going. Combine that uncertainty with the fact that you can't do anything offline, you are entirely dependent on them to keep their services up if you want to maintain workflow continuity. If you learn how to use a really great email client that supports reminders, snoozing, and the creation of tasks on the fly, it might just go away one day because somebody in California decided it wasn't worth the effort. For a company that wants to help you make your life easier, they really aren't doing a good job of reassuring you that you'll be in good hands in 2 years.

What is Google doing with Reminders? My memory isn't perfect, but... When Inbox came out, Google introduced us to reminders. Reminders could be used for tasks, or literally just to remind you of something. Reminders were common between Google Inbox/Gmail, Google Keep, and Google Assistant... Then Google introduced a revamped Tasks app. These tasks were more purpose-built for tasks than reminders are... but they didn't chose to integrate the two. They chose to maintain reminders and tasks separately. If you go to Google Calendar right now and click the FAB. See what options you get. 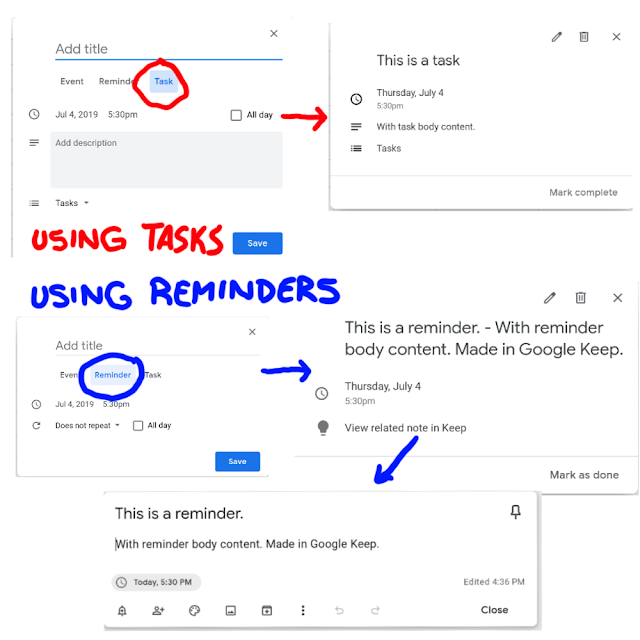 ...and this is how they look in the calendar itself: 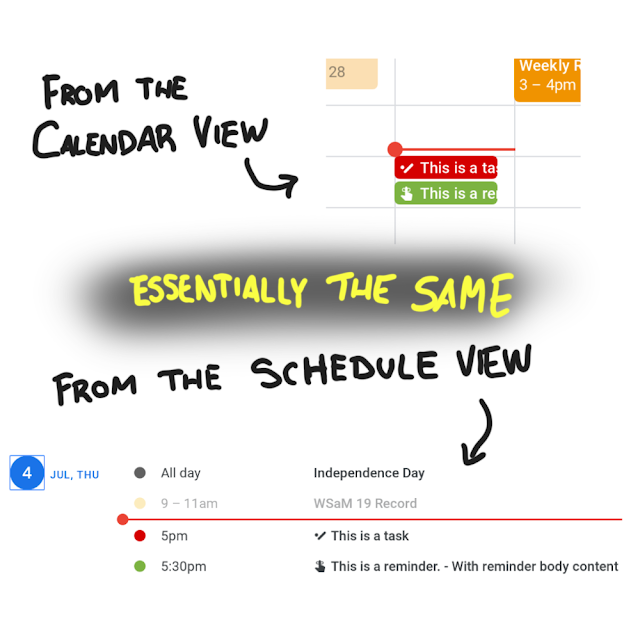 My Google Home used to work with Google Keep. I could add tasks to my task list. I could add groceries to my shopping list. I could share those lists easily with my wife. We could create reminders to surface those lists when we went to our preferred grocery store. Then Google decided it wanted to promote it's "Express" service, so they broke the shopping list connection... and for good measure they decided to just not support any connection between Assistant and Keep. After user outrage, Google relented forcing you into Express... and instead created yet another location for those lists to reside.

Google Fiber was going to take over the world. Now I'm just holding my breath until I read an article that Google has decided to spin Fiber off into its own, independent company. Or, worse, sell it off to some pre-existing internet provider. They definitely aren't pushing it like they once were. They definitely aren't looking to become a true nation-wide competitor to the incumbents. They aren't trying to shake it up.

Google Play Music is being (replaced? turned into? developed alongside of?) YouTube Music. I have no faith it will be around, thus I didn't have any motivation to convince my wife we shouldn't use Spotify.

You get the idea. https://killedbygoogle.com/ shouldn't have to exist.

I have not been a member of the Apple ecosystem for long. I have had an iPhone for less than a year. Upon making the switch, I didn't jump in with both feet. Some of the first apps I installed were Gmail, Google Calendar, etc.

The other day Apple had their WWDC announcements. They announced a lot of new features coming to their notes app. It didn't make their notes app a revolutionary new entry into the notetaking application namespace... but they made it better. They didn't put out something entirely different. I thought "man, wouldn't it be nice just to know that an app you are trusting is going to be around and supported for the long-haul?" I realized I will never really feel that way about anything Google does ever again. I think that Gmail and Google Drive/Docs are staying around. They will probably retain some core set of features, but anything beyond that... I don't want to come to rely on.

Google is a great and wonderful company. It is wildly successful, and for good reason. But if Google doesn't give its users a reason to believe that they can depend on their services long-term, they are going to have more power users like me looking for alternatives with staying power... and that's a shame to say about one of the top 20 biggest companies in the world.

Only somewhat unrelated to the body of this post - I've been thinking about changing up the Column. Blogger is fine, but it feels like it could be better on some other platform.

Hey I just found out I can type emoji in here. 💩

Top 5: Changes Google could do to make me fully back on board
5. Settle on one messaging service. Make it available on Android, ios, and chrome. You know, like Hangouts. Just commit to Hangouts. JUST MAKE HANGOUTS YOUR STRATEGY GOING FORWARD! REBRAND IF YOU HAVE TO BUT MIGRATE THE SERVICE!4. Keep building out Keep. If Google gets rid of Keep, I'm going to lose it. There are a lot of really obvious features they could add.3. Google could just acknowledge their image publicly. Right now it seems like they are pretending this problem doesn't exist, when clearly it does. The first step before fixing a problem is admitting that you have one.2. Supporting Markdown across their products. Don't make me use my mouse.1. They come out with some sort of a statement giving a list of services they will support and integrate together for the next 10+ years.

Quote:
"How you do anything is how you do everything."
- dailystoic.com -