Motto: Slow pitch straight down the center of the plate

I'm not in the business of writing movie reviews on the Column since I started a podcast that covers that topic pretty thoroughly.
That said.
Avengers: Endgame is out. I watched it opening night, then again opening morning. It quashed my long held secret belief that I would die by some tragic means before I got to see how the story ended. That superstition hit me pretty much immediately after learning about Marvel's long-term movie plans.


Am I wrong to think that the accomplishments of Kevin Feige and Marvel are every bit as impressive as anything else humans have done lately? I'm not going to sit here with a straight face and write "The MCU is equally as impressive as the Moon Landing" - but I am going to point out that both were massive collaborative efforts along a similar timeline. They were both successful. They both changed the landscape of their respective fields (science and movies) forever.

Endgame was fantastic, by the way. For more information on that - listen to this podcast we recorded about it.

I just realized I can direct-link to podcasts we've made. I bet I'll do that more in the future. You're welcome.

I love my Samsung Chromebook Plus. I'm officially calling it love now. This is my favorite device I've ever owned... and that's saying a lot. Rather than blather on here, I will use my Top 5 to extol its virtues as a glorious nexus of design and function.
Before I get there, though, How can a $400 laptop function every bit as well as my $1200 desktop? How is it that a device with a limited OS can feel so freeing? Again I'll save the specifics for the upcoming red text.
I recently was bequeathed an Apple Watch by my wife, and it's potentially changed my opinion on iOS and staying in the Apple ecosystem as a whole. Before I got this thing that's strapped to my wrist, I was pretty adamant about my intention to hop back on the Android train at the earliest possible opportunity... but I gotta say, I like this. It feeds into my next major section of this Column quite nicely. I love having the data. I like having the tech closer to me. I miss having a smart watch, and this one is clearly better than the one I used to have. I'm not sure what percentage of the benefits this device has would be equally as good with any of the other platform-independent options that exist out there.
Man this stuff is cool.

So my last post was all about Whole30, but it was almost entirely qualitative. I said I lost 10 pounds, but that was it. Guess what, I HAVE MORE METRICS.

The following comparisons are being drawn between:
1) The 30 days I spent on a Whole30 diet
2) The 50 days I've done a Paleo diet
3) The 1875 days I have recorded on my standard diet (pizza & cheezits)

Similarly, my likelihood to exercise is probably not a fair graphic to make. I exercised 15 of the 30 Whole30 days. 50%. On Paleo I tend to exercise slightly less often than that, 13.5 out of every 30 days. Compare both of those to the baseline, 10 out of 30 days, and you see the spillover effect of eating with more discipline into added discipline elsewhere in life.

In terms of how my back feels and how I rate general happiness, both go in the order of:

Albeit the total point swing is less than 10% for both metrics, so I don't know if that's all that telling.

There is one very telling metric, though.

I'll caveat that fairly shocking graphic up front and say that Mint (my data source) isn't perfect at categorizing, and sometimes big purchases at stores like Costco will be lumped in with the "grocery" tag. However that's not the case with the 30 Whole30 days I recorded. All the grocery costs were legitimate.

A second, more relevant caveat is that the act of changing a diet is expensive. It's not necessarily that Whole30 is just THAT more expensive than a standard diet, but it's that we incurred a lot of "switching" costs, that would not sustain if we were to eat that way long-term. This is made worse by the relatively small sample size of 30 days. The "already eating this way" effect plays out somewhat by the lower cost of Paleo. We already had supplies to eat Paleo. Both times we've started Paleo, it didn't coincide with a tirade of buying things to support the diet.

I wondered if the higher cost of groceries would be offset by the lower cost of not really eating at restaurants... they weren't. Whole30 is expensive. That benefit-of-the-doubt long-term second caveat I made doesn't even really apply to Whole30, because it is a short-term diet by definition. Those 30 days are going to be expensive. You just have to hope they lead you to a less expensive, more sustainable, healthier-than-before diet.

The other day while researching Apple Watch quantified self apps, I stumbled across a blog that makes this one look like child's play. Mark Koester's "Minding the Borderlands" has been fascinating me for the past many days. He writes about goals, data, quantification of the self, learning, knowledge, notetaking, among many other things. Do those things sound familiar?

Except he puts in effort. Reading his thoughts feels like reading my own thoughts, if I were to actually dedicate the time to reaching their logical conclusions. If you've got any interest at all in any of those things, I really recommend checking it out using the link above.

Top 5: Reasons the Samsung Chromebook Plus is Awesome
5. Even with their limitations, ChromeOS + Android function very well as a laptop OS. If you want to do something that you can't do using ChromeOS, you're probably better off NOT doing it on a laptop anyway. Provided you've got a desktop PC as backup, there's almost no reason to spend more money for a more capable laptop.4. I love the size of this machine. Not just it's size, but it's aspect ratio. It's almost exactly the size of a spiral bound notebook (see the pictures below), which makes it feel so natural to hold and to write on. 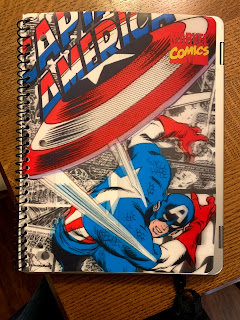 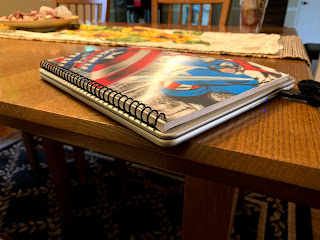 3. Its built-in stylus functions well enough for anything you want to do. They say the best camera is the on you have on you - to me that truism applies doubly for a stylus.2. The fold-all-the-way-around convertible design is the best form factor for a laptop, especially one with a touch screen. If you flip it past flat, the keyboard stops registering presses - and having the exposed keys has never bothered me. Yet I get constant usage out of this device in all its possible configurations: regular laptop mode, tent mode, face-down-screen-up mode, and in full tablet mode.1. The screen on this device is the best screen in my house. It's bigger than my phone. It's sharper & more vibrant than my 1440p computer monitor.
Quote:
"I find it’s best to frame this tracking towards either better self-understanding or optimized self-improvement. So, when it comes to goals, tracking data can serve as a feedback mechanism for understanding a specific area like health or productivity or as a gauge to measure your progress towards an objective goal."
- Mark Koester - in this post -