Remember how I said I want to write a book, and how I might dump stuff on here that's from the book? This is counting. 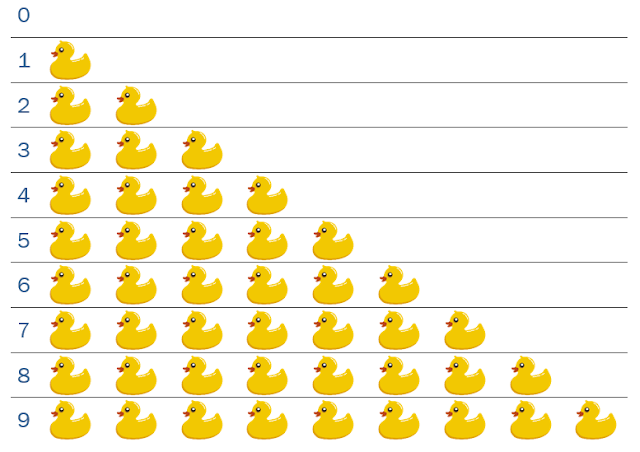 Each line of ducks has one more duck then the line before it because each number is one bigger than the number before it. The first number is zero. Zero means you have no ducks. Zero is a strange concept that comes into play when you want to count numbers bigger than nine.
We decided we didn't want to have more unique symbols to represent numbers than we have fingers on both our hands. Luckily, we figured out a way to count higher than 9 using only the symbols 0, 1, 2, 3, 4, 5, 6, 7, 8, and 9. Once you count up to 9, instead of going higher, you go back to 0, but you put a "1" next to the zero to make "10".

Another way to think about it (either more or less complicated, you choose) is that those positions were always there… they was just a zero before, so you had no reason to write it. Actually every number position we may ever need is always there and always zero… until we count up to it.

The number of symbols you use before you create the next-higher position is called the "base". In Base 16 ("hexadecimal") the symbols are 0, 1, 2, 3, 4, 5, 6, 7, 8, 9, A, B, C, D, E, and F. This is also useful for computer, just in a different way. Humans have 10 fingers, so we like to use base 10.
We like to illustrate the order of the numbers and the space between them using the number line.
The number line is also helpful for illustrating mathematical operations, as you'll see below.

Make a number line for each term, line them up beginning to end, then count to see how far they go. Addition is just repeated counting.

Like addition, you make a number line for each term, line up their ends. The number line for each number with a minus sign in front of it goes backwards. Then see where they line up. Subtraction is just repeated counting, where sometimes you count in the other direction.
Addition and subtraction are just counting in disguise… and they're not the only ones. 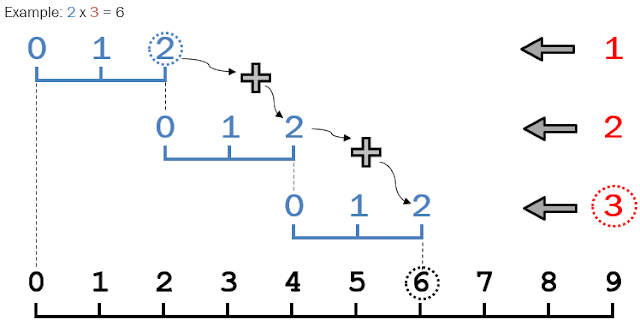 Multiplication is just repeated addition. You add one number to itself over and over, counting the number of times you do it, until you count to the other number. Then you see where you end up. 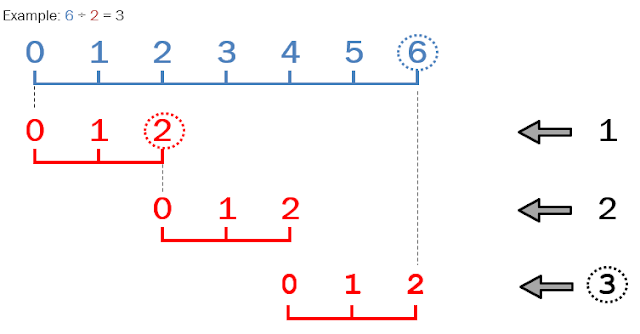 Even exponentiation is counting. Repeated counting is called addition. Repeated addition is called multiplication. Repeated multiplication is called exponentiation. This is more complicated, and you shouldn't expect to understand this until later on in school. To show how it works, we need to use a more complicated color scheme.
Example: 23 = 8
To say out loud "23", you say "two raised to the third power". To calculate 2 raised to the 3rd power, you're counting the number of timesyou count the number of times you count to two. 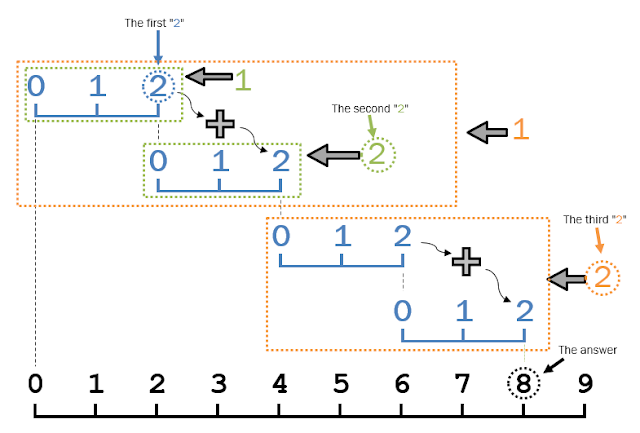 There are other mathematical operations (e.g. logarithms). They all boil back down to fancy counting. We aren't going to show any more of them because it gets really hard to show in a single page why that fact is true - and by the time you learn them, you won't need to use the number line.
----------------------- end snippet -----------------------
That's counting. I do NOT plan on being as thorough on everything as I was on counting, but counting is so fundamental to everything I wanted to make sure I covered it well.

Sorry if this Column is boring. I guess if it is to you, then you didn't read this bit. SO THANKS IF YOU DID!

Now, sorry for potentially repeating myself with these Top 5s. My thoughts continue to evolve.

Top 5: Current Thoughts on Why iOS is Better than Android
5. I really like the way apps on iOS look and function. Almost every single app I have on both is better on iOS. LastPass and Strong, in particular, are both much better on iOS.4. The voice-to-text dictation on the iOS keyboard is nice. I don't like Google guessing when I'm finished with my message. It makes me feel rushed, which causes me to make mistakes.3. Face ID is really neat. Nowadays when I pick up Android phone I always just look at it and expect it to open up.2. The iPhone hardware on this XS is better than any Android phone I've seen1. The OS and apps work without hitch or hiccough 99.9% of the time. Stuttering and slowdowns still don't happen.

Top 5: Current Thoughts on Why Android is Better than iOS
5. There are a few apps on Android that have no good iOS equivalent that I've found.4. Android's NFC access to developers has made some things in my life better. I can get photos off my DSLR by tapping my phone to the camera. It instantly connects the two. 3. The iPhone homescreen is flat out worse. Having to put useless apps at the top of the screen to push the apps I actually want to use down toward my thumbs is so dumb.2. The car experience with Android is so, so much better.1. Android integrates with MY life better. The Life Tracker gets data from Google Fit. It won't work with Apple Health unless I develop my own app, even then it won't be as simple as it is just grabbing the data from the internet.
Quote:
"Part of me really wants to pull the 'I told you so' card...      ...so I will."
- Danielle -