Motto: This Should have been Column 365. Shucks.

I already have my obligatory January 1st trip to the gym in. I am already writing. I'm just ticking boxes left and right.

Rather than talk at great lengths about the annual tradition of looking hard into the things I want to change about myself or my life for the next 365 days... I am going to use this post to take a look back.

In January 2013, Melissa has just left for her 6 month trip abroad. I had just decided I didn't want to be apart from her ever again. I had a LOT of time to myself to start these long term projects.

In January 2014, I was engaged to be wed, and taking some well-documented intentional steps to try to expand my understanding of myself and the world. Also I was heavy into Dominion.

In January 2015, Melissa and I were married, living together in an apartment. Melissa and her sister celebrated New Years on a cruise ship. I decided my lack of FOMO had lead to "MO", and was bummed - so I turned my attention to building a PC. I wrote about wanting to "refresh"... In retrospect I feel like this is where I entered what could be described as a period of stagnation until late in the year.

In January 2016, I was fresh off a switch to a new job that I liked better. We were living in a nicer apartment. I was meeting new people with which I had common interests. I was done with the 30 Day Challenges but had a lot of goals for the year. Those goals led me to hurt myself lifting at the end of the year in attempt to meet my lifting goals. That injury would plague me for the next 6 months. Also we became homeowners this year.

In January 2017, I wanted to keep it simple. Comfort, Control, Competency, and Captain America. Those 4 C's quickly became 3 C's as I dropped all hopes of being competent at anything. Eventually they boiled down to "Captain America", which was loosely defined as "be more like Steve Rogers". I was enjoying my job, started playing golf and pub trivia regularly, and generally living a pretty great life. This all capped off by the end-of-year news that we were going to have a baby.

In January 2018, I wanted to keep it even simpler - No Zero Days. I was living a pretty good life, day-to-day, but didn't feel like I was making big strides towards my long-term goals. The No Zero Days idea was to prevent me from living a single day where I didn't make at least some progress towards my long-term goals. This, I think, was at least partially in response to the pregnancy. 2018 was a crazy, crazy year.

As I write this now, in January 2019, there are three Gillespies sitting in our home office. It's crazy to think how it's all come to this moment... and to think where it will go from here. 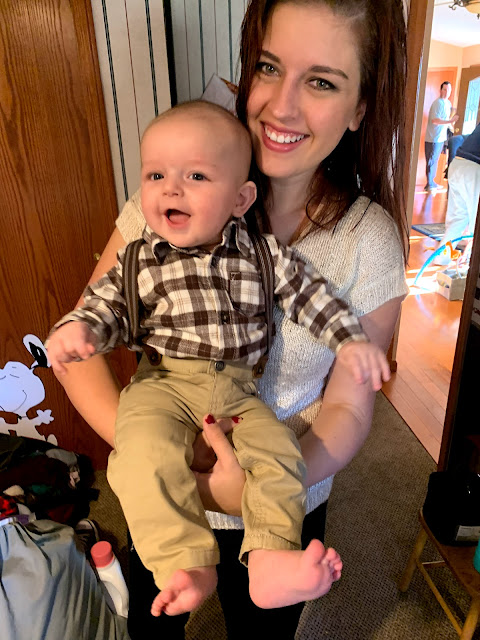 Top 5: Goals for 2019
5. Start doing 30 Day Challenges again.4. Do (something) to continue learning new stuff intentionally.3. Continue podcasting, and work on other creative endeavors.2. Spend as much time as possible with my son and wife.1. Continue to be goal-focused throughout the year.

Quote:
"Take this. It fits in your pocket."
- My favorite line from Spider-Man: into the Spider-Verse, if you haven't seen it you should -