I hated economics in school. It was a boring subject. The study of supply and demand was too demanding. Interest rates didn't interest me. The law of diminishing returns got less and less cool the more I learned about it.

Then a dozen years went by. Things changed.

Now I like economics, but it's it's not because I suddenly find supply and demand fascinating. Interest rates still don't interest me. The parts of economics I like aren't those communicated in the simple example problems teaching the fundamental truths of economics. I like to think about marginal cost and reward, the concepts of value and utility, and how economics applies to me as an individual, not a business.

I just got a phone. It's expensive, but it's also the single device I use more than any other. If your phone costs $1000 and you use it 2 hours a day for 2 years, that's $0.68/hour. It also replaces any number of other devices you would otherwise need to spend money on. Moreover, it has more utility than a lot of those devices, because it's always on you.

My natural instinct is to use this same train of thought to reiterate how I think automobiles are stupid and because you pay $10,000+ for thing your only use for ~1 hour a day, but the utility of vehicles isn't the time you spend in them, it's the capability a vehicles gives you. If you live in a place with good public transit or Uber or whatever, you may consider if having a car of your own is worth it.

I'm starting a podcast with a couple of friends of mine. We talk about movies and stuff. We've recorded 3 episodes, two of which will be available at some point in the not-too-distant future on podcast apps near you. When that becomes a reality, I'll tell you more about it and how to get it.

This segues into both of my remaining topics for this Column.

Avengers 4 has no trailer yet. That's a bummer. For hot takes like that, tune in to my upcoming podcasts.

That was topic 1 of 2. Here's me picking back up the segue.

I spent a couple weeks researching how to best record multi-threaded audio simultaneously. There are a ton of options - you can go super cheap and just use apps on a phone, spend a lot of money on a portable XLR recorder, utilize a mixer to combine several microphones to a single USB port, or just connect several USB microphones to several ports. Ultimately, we were just the right amount of particular, cheap, & stupid to decide that phones sounded too crappy, portable recorders are to expensive, mixers are too confusing, and several USB mics + GaragevBand fit juuuust right.

So that's what I've been using. Apple's free Garage Band software on my wife's Mac computer. It was eye-opening. It was probably the final straw that pushed me over the edge to do something I've been thinking about forever (and written about 4 years ago)...

I got an iPhone.

Actually that should probably just be a Column of its own. 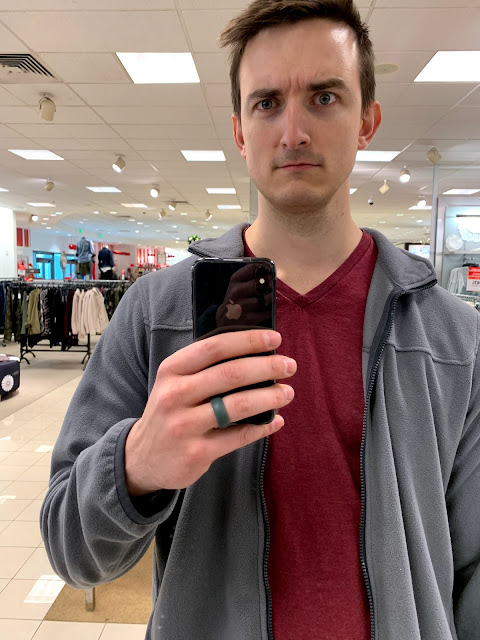 Top 5: Ways to Maximize Value
5. Buy in bulk4. "Measure twice, cut once", but in terms of thinking about buying a thing3. Don't buy a thing that's only got one use2. Don't buy a crappy thing twice, buy a good thing once1. Learn how to do everything you possibly can with what you have

Quote:
"GOOOOOOD MORNING VIDEOGAMES"
- People who know hot to podcast better than we do -