I have a kid. He's really cool. He sleeps a lot. He eats a lot. He's very large for his age. His temperament is incredible. He smiles all the time. He's pretty easy to soothe most of the time. He looks like me mixed with Melissa, which I suppose is obvious but is really neat.

Today Griffin giggled for the first time. I about cried out of happiness. That's something I never really experienced before having a kid. I think there's a country song about that. Being a dad can be pretty cool.

In other dad-related news - my lawn mower wouldn't stay running. I took it apart, cleaned the carburetor, and put it back together. 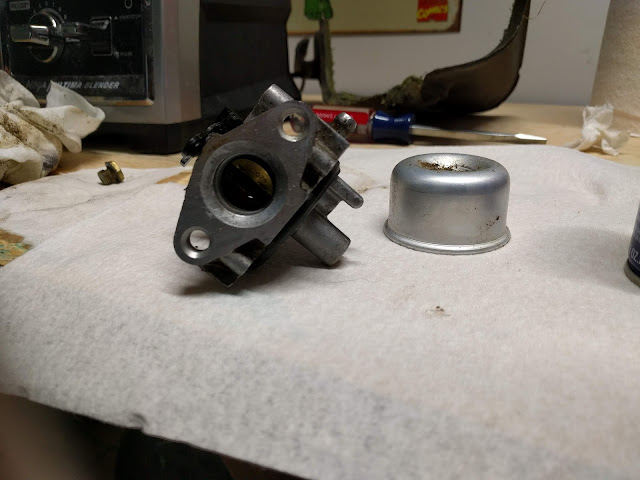 Then it fired up on the first pull. Then I over-the-top-celebrated for a solid half hour before mowing the lawn.

Hollow Knight was incredible. I haven't touched it since last time I wrote and I still think about it on a daily basis. It was such an incredibly well-done thing.

I am going to do a better job of proofing these before I send them. I went back thru the past few I've written & realized just how many typos I make on this. Or sentences that I'd start without f

TRANSITION TO NEXT TOPIC.

Google is great. I've written long about my fondness for the company. I would have defended every move Google made for a long, long time. I was a Google Plus advocate long after it was clear that I was flying the flag of a sinking ship. I've been using Android since the original Droid. I built the Life Tracker in Google Sheets, which I've been using daily for 5+ years. I literally own the book "What Would Google Do?". This blog is being written right now on Blogger, a Google-made product and typed on a Chromebook, while a TV show plays thru our Google Chromecast as requested on our Google Home.

Google is not perfect. Google has made mistakes. Some of which I struggle to come to terms with. I've already written one Top 5, but this seems like it's fodder for another. So here comes a rare two-top-five Column.

Top 5: Google Decisions I Can't Understand
5. "OK Google" and "Hey Google" are incredibly annoying to say over and over. Just let me change the name of the Assistant.
4. Google's switch from the Nexus line of phones to Pixel phones. I don't care about the branding, but I do care about the change in philosophy. The Nexus phones were Google showing the world that you could have a premium phone without paying a premium price. They decided to go premium, but really have only succeeded to make their phones more expensive.3. While we're on that note - they got rid of the headphone jack, they adopted the notch, they are doing what Apple does... just a year after Apple's done it. It doesn't feel like Google's got anything to say any more.2. Google's schizophrenic approach to developing products. I could easily fill yet another Top 5 with "Google is developing both of these products that do the same thing"... often times it's more than two. Even now, Google Tasks is back from the grave - but does nothing that isn't already in Keep or the Assistant.1. Google shuttering Google Reader. I was using it every day. Much like a lot of other folks. Them killing that service makes you realize that everything about "the cloud" is ephemeral. All these services and products I use could just roll over and die with no warning (and one day, will).

Top 5: Things I Wish I Had Another Weekend to Do
5. anything related to writing code - it's been a while since I've done anything with that for fun4. make a sweet drawing of Hollow Knight - I've got a particular picture in my head I want to create3. learn to do animations - I've got a particular song I'd like to do a simple animation for2. hang out with my family outside - I didn't do any of that this weekend and massively regret that1. research podcast stuff - I'm looking at podcast stuff, by the way