That's right. I started a retrospective of the past 30 years of my life with a R.E.N.T. joke. Clearly I'm going deep with this Column.

Five Years ago I wrote a Column talking about how awesome turning 25 is and how awesome the next 25 years were going to be. I wrote how I was excited to relive every day I had already been alive, but with "at least my current level of understanding and faculty, my current level of independence and capability". Looking back I see what I was getting at... but I might take a slightly less "everything is great" approach. In the last five years I've struggled with things I never had before. I'm forgetting things I learned in college. I'm hurt myself while exercising. I've hurt myself while warming up to exercise.

I've gotten married. I've also switched jobs to one I enjoy. I've been fairly successful with maintaining my health. I've become a homeowner. And soon... a father.

I guess what I'm saying is at 25, I thought I was going to live to see another 25 years worth of days exactly like those around my 25th birthday.... but the next 25 years aren't going to be like the past 30. They're going to be different. Different isn't better, nor worse. It's just what's next.

In that same Column from 2013 I debuted my first Second-A-Day-For-A-Year video - My 24th Year. In the following 4 years I added to the continuous story of my mid-to-late 20s. There's not a "My 29th Year" Second-A-Day video attached to this Column or in that playlist. There will be one soon, but there won't be a "My 30th Year". I'm moving to something better.

My numbering was off by one the whole time anyway. This wasn't my 29th year, it was my 30th. When you turn an age, that's the number of years you've already lived. You weren't born at -1. Idiot. 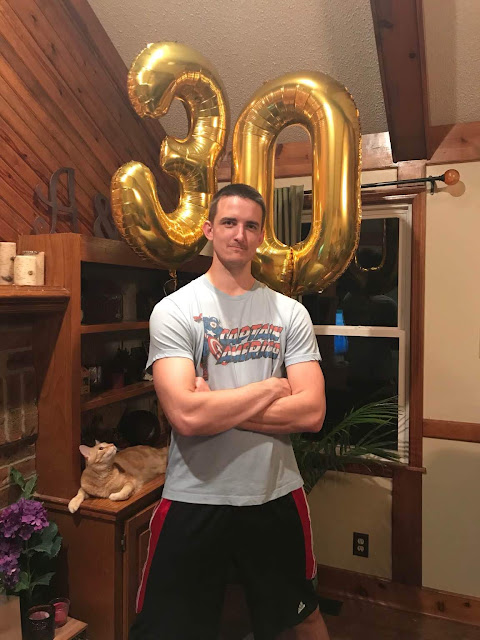 Top 5: Best, Most Succinct Self-Realizations I've Ever Had
5. I'd rather not have something I want, than have something I don't want.4. I'm both extremely driven by my interests and completely incapable of choosing them.3. I'm a very competitive person who doesn't like serious competitions.2. My train of thought carries a lot of momentum.1. I've been incredibly lucky in every way that matters in my life.