The Stock Market doesn't make any sense, I can't believe it's a thing. It seems to me like a form of gambling, that's simultaneously nonsensical and very commonplace.

Here's what I DO get:
To start, a "dollar" is just a unit of value, the same way that "meter" is a unit of length. Only, the dollar unit technically changes from time to time with regard to how much "value" it refers to, it's pretty stable. You have the option of converting some of your dollars into "shares" of a company. A "share" is a unit of value in the same way a dollar is, but it's relative value changes with the relative total value of the company. So, you convert some of your static-sized dollar units into dynamically-sized share units, in hopes that the share units will represent more value over time. At some point you convert your shares back to dollars, hoping to have more dollars than you had to begin with.

It's like I heard a new word "felogy" whose definition I didn't know. Then I looked it up in the dictionary and saw the definition for felogy was "meembege". Then looked up "meembege" to find its definition was was just "felogy". It's a circular path of unhelpfulness.

I started to draw out some notes... but didn't really go anywhere with it. I wanted to make a metaphor where value = total shaded area, but quickly realized it wouldn't help illustrate the portion of the concept that made no sense. 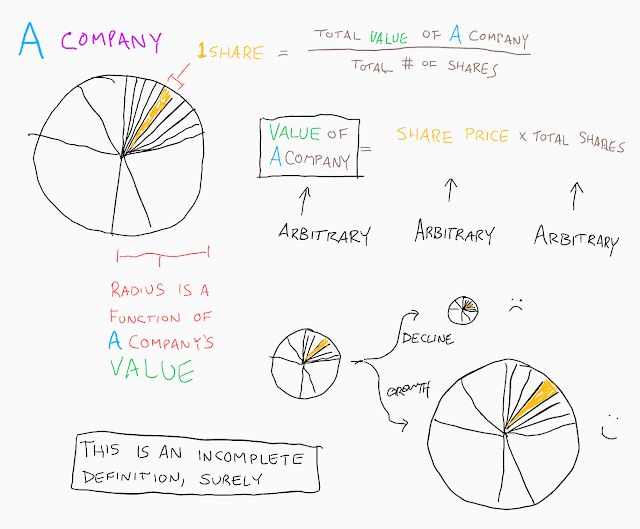 What is the benefit of holding shares of a company other than that you may be able to sell them for more money later? Why does anybody want them if they hold no intrinsic value? Dividends seem like one possible answer, but I know those aren't always a thing. So, why get a stock for a company that doesn't pay dividends? What keeps the whole thing going? How did this crazy idea get started in the first place?

Same thing applies with Bitcoins. People buy bitcoins because they are valuable, but they are only valuable because people buy them. Makes no sense.

A couple weeks back I decided to sell my two old GoPros on Craigslist and use the sales to buy a new GoPro HERO5 Session. It's really revitalized my interest in using GoPros to films stuff. I'll go into more detail in my Top 10, below. One reason is that it is compatible with the new "GoPro QuikStories". GoPro QuikStories are pretty sweet. I hung out with my in-laws over the weekend and did some filming, got to my phone later and had had this video waiting for me:

Note I added the text at the beginning manually, just to see how I could change things.

That's pretty neat. If GoPro does the editing for you - it's a lot easier to just, take one with you for a weekend trip & pull it out from time to time to film stuff. At the end of the weekend, wind up with a cool little video capsule showing the highlights of the weekend? Sweet.

Lastly, for my birthday my wonderful wife bought me a Nintendo Switch, which I have been clamoring on about since I saw the debut trailer a long time ago. I've been wanting on a long time, but haven't been sure what it would be like to actually own. Turns out, it's pretty sweet. First off, the new Legend of Zelda game is incredible thus far. It takes all the things I liked about the old Legend of Zelda games I played growing up and combines it with all of the things I liked about Fallout 4, then puts it together in a really pretty package.

Beyond LoZ, the system itself is really nice. It feels much more premium than I expected. The rail system for the Joycons gives a really satisfying "click" when they're in place. Pulling the switch out of the dock switches you to handheld mode immediately. Turning it off and back on is basically instant. Combine those things and it's like the dream you had when you were a kid. What if I could take my video game with me on the road? What if I didn't have to stop playing when I went to bathroom! I have played Legend of Zelda on the toilet. It's a great feeling. No shame.

The game catalog for the switch is admittedly shallow for the moment. I only tend to buy about 1 to 1.5 video games a year, though. So this LoZ will last me until Super Smash inevitably comes out. Or if I hear the new Mario game is amazing, I'll pick that up.

Marvel movies are coming out 3 times a year, and they're always great. I have a video game system that I can project onto the wall, or play while I'm in line at the DMV. I can make cool drawings on my computer. My GoPro works with my phone to make videos all by itself. I have friends, a house, and a beautiful wife who loves me.

What a time to be alive.

Top 10: Immediate Perks of the New GoPro (Over My Old Ones)
10. It takes 1 button push to turn the camera on and start recording
9. It's smaller, which is neat
8. Because the camera is symmetric, it can be rotated inside of the frame, eliminating the need for goofy right-angle bends in mounting
7. It's waterproof without a case
6. It stays in communication with my phone, even when it's off (somehow)
5. It's compatible with the new GoPro Quikstories, which I have REALLY enjoyed these first two days4. You can charge it while it's mounted3. The battery lasts longer than either of my old ones2. No case means no annoying GoPro case noises in your video1. It uses the same cable as my phone - seriously, this alone is what pushed me over the edge for making the switch and I appreciate it every time... now my Switch, laptop, camera, and phone all use the same charger... the USB C promise has come to fruition and it's an incredible thing for people who like to keep things simple

Quote:
"That game is about Doritos and unhappiness"
- Kory, about another Nintendo Switch game -