Motto: After Writing All of This I Realized Most of it is Embarrassing

Hello internet. I'm writing this in my basement on the couch, waiting for Shadow of the Colossus to download on my PlayStation. I've heard it's a classic, so I'm going to give it a shot.

While it was downloading, I watched Caddyshack. I'd heard it's a classic, so I gave it a shot.

It's extremely nice out right now. So I should go outside and take advantage. It would probably be good for my mental health. Instead I watched a movie, then lifted weights, and now intended on playing a game (once it downloads and I'm done with this) until my wife gets home from her summer gig. We might grill out then. Who knows. Lately all I've really wanted to do outdoors is play golf, but golf is expensive. Playing it by yourself doesn't seem like it would be as fun, and playing it with other people requires coordination & forethought. I am fundamentally lazy. So those things don't happen. Maybe a bike ride. Maybe not.

If it's not clear by now, I'm just writing whatever I'm thinking. I've decided for this Column to just let my mind go wherever, and write down what the little Aaron voice inside my head is saying. He's usually filtered and whittled down so that he doesn't fill space with words like "whittled" that he immediately regrets. Now I'm referring to my internal monologue as a different person than myself. I wonder if that's normal.

Anyway I didn't come here to write about what I'm writing like. I had some ideas.

Sometimes I wonder what it would be like if I threw all of my Google stuff out the window and bought into Apple's ecosystem. Would I hate it? Would it be just as good? Would I find out that I've been on the wrong side of the fence for years? Would it matter at all, or would I just fall into the exact same life I had before. It's not like my Googleyness defines me. I'm just fairly well placed with what I've got. Sometimes you feel like refreshing things. Lately I've been thinking more and more about how I want this or how I want that. Maybe it's a matter of me not doing what I really want to be doing. Maybe it's a matter of my laptop being 3 years and 3 months old and I'm bored with it. But I'm writing this on it so how bad could it be? Or the PlayStation 3 that's still my only gaming console after more than 6 years. Or the computer that I built a couple years back. Maybe I could upgrade that. Or I could buy a new couch. Or I could just look inward and realize that my lack of satisfaction comes from not being what I want, not not having what I want.

So what do I want to be?

Captain America.
That's always been my answer for that. I don't think it's a bad answer. I've settled for Captain America meets Tony Stark meets some really lame guy who thinks about himself in terms of which Marvel hero he might most be like. Maybe I should think more on this. I know I want to be a good husband. A good friend. A good person. You're supposed to have that defined by the time you reach adulthood, right?

Part of what's difficult about getting older is that you get better and better at raising your base-level happiness & contentment. You become less and less desperate to get out and go do new things, because you've seen a lot of things you like. You've learned to hone in on those things and surround yourself with them to the extent possible in a normal life. It's a gilded cage. But it's golden. and pretty. So why complain? I'm not even being cynical here. It's a genuinely true thought. I'm not saying getting older and having figured out a lot of stuff you like that makes you happy is a bad thing. It's nice. Way nicer than being young and frustrated constantly by having to do crap you hate for the most part. That said, it's easy to picture a man bordering on retirement who's just spun in one small circle (that he really like's spinning in) for the past 30 years. God I'm 30 years away from retirement. Statements like that make you realize maybe you're not so old. I've got time. I'll get there. Or, at least I'll try. There's a nobility in that, right? Just because you're never "there" because your state of mind constantly changes and you evolve and where "there" is constantly changes doesn't mean you shouldn't chase it. You shouldn't go forward, sideways, and backwards - wherever seems the brightest. Just closing up and settling down for what you've got is stagnation. And stagnation is death according to most radical teenagers. If the music's too loud, you're too old. If I can't live my way then I don't want to live at all says the kid who's got no real responsibilities. What an ass. I can live my way and I want to continue evolving what that is.
For the reader - I do this kind of exercise from time to time. But I usually do it with a pen and paper. That slows my thinking down and I can sort through some crap. This typing thing has let me almost keep up with that little voice and has really gone awry. It's hectic. It's eclectic. Get some perceptive and be redirective. None of that made sense. SEE WHAT I'M TALKING ABOUT?

This word vomit took about 20 minutes to write. My game is almost done installing now. I'm going to kill some colossi.

The picture to go out on: 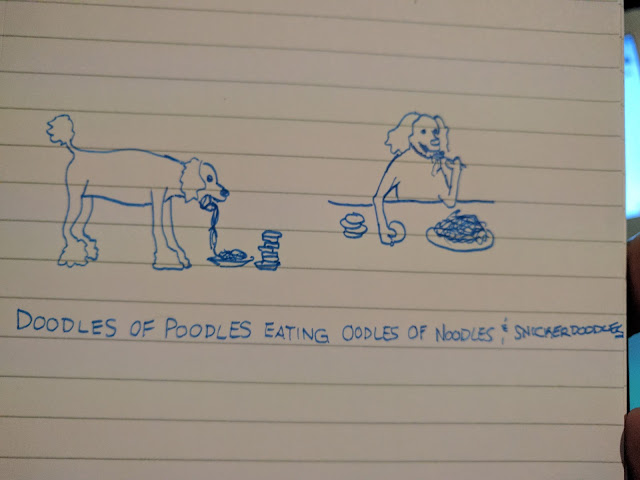 Top 5: Aaron Things (for the Past Dozen Years or So)
5. Writing/drawing4. Playing games with friends3. Using my body while I've got it2. Consumer technology1. Movies - especially MCU movies