I write these posts in random order. Sometimes I start on the body. Sometimes not. Today this is the last paragraph I'm writing. I didn't mean to write this whole thing tonight, but I did. Whoops.

Apple's developer's conference was today. They announced some new stuff as per usual. Some of it is pretty neat. Some of it is not that exciting. All of it is overpriced. It got me thinking, though. They updated their notetaking application to work in new ways with the "Apple Pencil", which made me wonder to myself how many people are going to change their notetaking workflows to accommodate this new feature? Beyond just this feature, how many people are going to change the whole way they've been doing stuff just to accommodate these various new devices?

Then I got to thinking about the concept of "systems" as a general topic. It seems like it's not a good idea to rely on your "system" for doing things to be overly dependent upon others... especially others who aren't incentivized solely by maintaining you as a customer. Apple is an easy target for this. They aren't in the business of making an iPhone that you can buy once, develop your habits and daily life around, and leave those habits unchanged for the next 10 years. You're constantly being pushed into the next way of doing things, all in the name of "progress!" But that progress comes with a feeling of losing all the progress you made before it. Sure it's a fresh start, but you're constantly burning a bit of the bridge you just crossed. Apple is in the business of selling products. They aren't necessarily in the business of doing exactly what's best or most efficient for you.

Have you ever heard the term "high-concept"? For example, "that movie was so high-concept, I'm not sure I'll ever wrap my head around it". I've heard this term a decent amount, and I've never once heard it used correctly. Even I don't use it correctly. I didn't use it correctly in the example I just gave. For some stupid reason, "high-concept" means "(especially in a movie or television plot) emphasis on a striking and easily communicable idea", basically just the opposite of what it sounds like. I'm sure there's some logical reason the person who coined this term with a seemingly backwards definition, but rather than invest the effort to understand why, I will choose to say that person is an idiot.
The definition I got straight from Google's Knowledge graph, by the way.

Have you ever heard the term "paper weight"? Not the single word "paperweight" as in "the iPhone I dropped is now just a $700 paperweight", but instead in the two word phrase referring to the weight of paper - as in "this is a 32lb off-white A4 sheet of paper". It turns out paper's "weight" literally refers to the mass of a standard amount of paper. didn't appreciate the difference between heavy and light paper until I got a new notebook at work that's 28 pound paper. Writing on that feels like etching on stone with a lightsaber. It's truly opened my eyes to how crappy writing in a notebook with standard 20 pound paper is. Each page is truly a blank slate. Turning the pages doesn't feel like turning a piece of limp cloth. It feels like you've just completed something important, archived it to a permanent location, and begun anew with a blank white canvas. Every single page turn is like fresh snowfall to play in. It's so good.

I was going to move on, but i just thought of another metaphor for the paper weight thing - it's like getting the iPhone 4, the first one with a "retina display", then trying to go back to your old iPhone 3G with the crazy low pixel density. You immediately realize what you've been missing, adapt to the new baseline, and hate everything you've dealt with up until that point for being inferior. I'm having a similar experience with my Chromebook at the moment because I saw a Chromebook Plus in person.

AND STILL I CONTINUE TALKING ABOUT PAPER WEIGHTS with my picture to go out on. This is from an Amazon review I just posted, lamenting my recent purchase of the Leuchtturm 1917 notebook I bought recently. 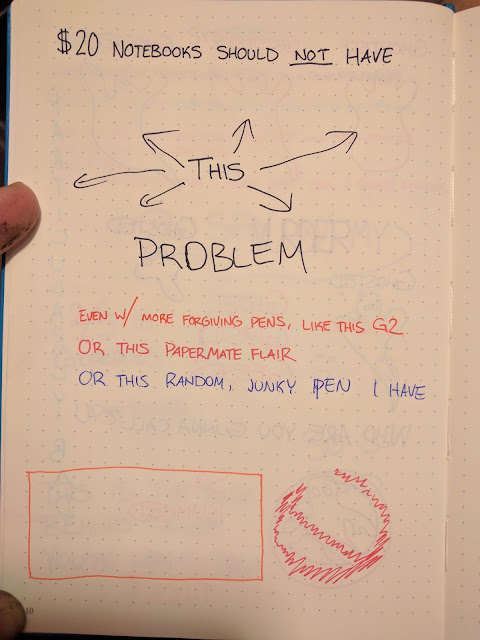 Top 10: Podcasts I Recommend
10. Nerdist - Chris Hardwick talks with celebrities. This used to be higher up the list, but the lately the podcasts have just been audio versions of his AMC show "Talking with Chris Hardwick"... which doesn't have the same vibe.
9. Hardcore History - Dan Carlin's one-man show in which he talks at staggering length about historical events. His show on The First World War was nearly 24 hours long. This podcast is particularly well-suited for road trips. He's an amazing story-teller.
8. Radiolab - Jad Abumrad and Robert Krulwich's heavily produced show dealing with a wide-array of topics. Radiolab is a lot like This American Life, but it trends more towards sciencey things, and employs more noticeable editing style. This is the first podcast that I managed to listen to every episode of.
7. This American Life - Ira Glass's weekly podcast/radio show is, for many, the baseline against which all other podcasts are compared. There have been some great episodes and some not great episodes. On the whole it is worth the subscription.
6. Freakonomics Radio - Steven Dubner explores "the hidden side of everything". It's a well-produced, mentally engaging podcast that talks about all sorts of things. I listened to the most recent "How Stupid is Our Obsession with our Lawns" while I was cooling off, post-mow. I hate mowing. I don't like lawns. I was on board before the opening theme played.
5. Do Go On - Dave, Matt, and Jess take turns presenting reports on various topics from the hat. This is currently my 2nd favorite podcast, as it combines things I like from #7, #2, and #1 from this Top 10. It's listed at #5 cause I haven't been listening to it long enough to justify putting it any higher. It's been steadily moving up the list.4. Serial - Sarah Koenig, originally from This American Life, tackles stories that are too big for a single, hour-long episode. Season 1 of Serial is a must-listen. 3. This Week in Google - Leo Laporte talks each with with Jeff, Stacy, and usually some tech journalist guest host about the most recent happenings in the realm of technology, the cloud, and, from time to time, Google.2. Good Job, Brain! - Karen, Colin, Dana, and Chris are friends who do pub trivia. This podcast is them quizzing each other, pub trivia-style, on topics according to whatever the theme is that week. I like the trivia. I like the hosts. Solid recommendation to everyone. 1. The Weekly Planet - James and Mason talk about comic books, movies, and whatever else they feel like. Listening to these two Austrailian dudes talk about the news, the most recent big movie, and what they're reading/what they're gunna read makes each Monday morning a highlight of my week, which is tough to do. This is without a doubt my top recommendation.