Motto: No shirt. No shoes. No thanks.

Columns will go on as long as they have to.

This Column was supposed to be a "fun" one, cause I feel like the last one I wrote was a bit of a drag to read. WELL GUESS WHAT! It's not going to be. I'm going to open up a vent and blow out all sorts of pressure (insert fart joke here) that's been building in me for the past 7 years about my incurable autoimmune disease.

If you'd like to skip the upcoming dreck and refuse, you can skip ahead to the Top 5 which I do hope you'll find delightful.

I'm going to write about what it's like to have a
progressive,
incurable,
painful,
disabling,
autoimmune disease.

I'll be using works like "pain" and "general suckiness". So calibrate yourself. You've been warned. I might insert jokey jokes for the purposes of sanity here and there - but there's really a ton pent up processing I have that I'd like to vomit all over this Column.

I told you I'd be using words like that. SO BUCKLE UP.
---
Shortly after I turned 21 my back started hurting.
Or maybe it was my butt.
Or maybe my hip.

I wasn't sure. What I was sure about, though, was something was wrong. After a week of limping, where the pain got worse -not better- I saw a doctor. The doctor said:
You fell.
You pulled a muscle playing basketball.
You slipped a disc.
You ruptured your whatever.

Then my eye turned red. Like... RED. At first they thought it was pink eye. Just some random other condition, unrelated to my back. After pink eye medication didn't fix anything, Mama called the doctor and the doctor said "no more monkeys jumping on the bed... oh and you might have Ankylosing Spondylitis, so maybe you should Google that when you get home."

So I gave it a Googs.

Ankylosing Spondylitis:
Constant, prolonged pain and stiffness, usually worse in the mornings and at night.
Check.

Pain usually starts centered about the sacroiliac joint (where the hips meet the spine).
Check.

Usually onsets in the teens or early twenties.
Check.

A rheumatologist would later give me the diagnosis of "undifferentiated spondyloarthropathy", which is incredibly hard to say and harder to spell than "ankylosing spondylitis". Undifferentiated spondyloarthropathy basically means "yeah you might have Ankylosing Spondyljunk, or you might just have any of a host of other things that are in that family... but regardless you have some form of arthritis and you're screwed, dude."

I lived a very painful month in which I couldn't walk without a limp. I couldn't sleep at night because each position hurt in new and terrible ways. I couldn't look at someone without thinking "they are wondering why your eye is red and you've got a limp." And it was capped off with me hearing the sentence "you can still probably live a relatively full and normal life" and "if we don't treat this aggressively, you may lose the eye" from a couple of specialist doctors at the age of 21. 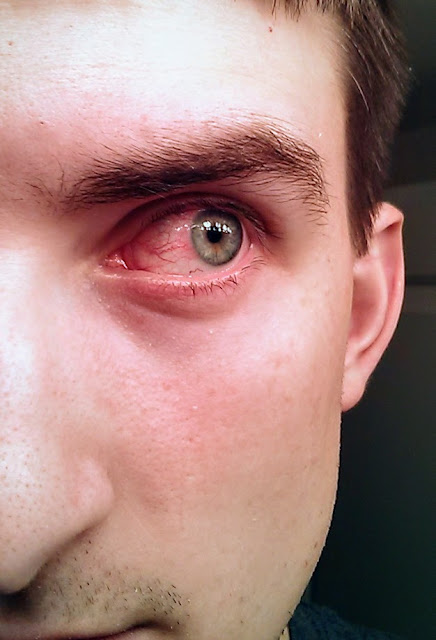 During all this time, my then-girlfriend stayed right by my side. In the immediate aftermath she didn't go running away. I'll never stop appreciating my wife for that.

I am thankful every day that I responded well to anti-inflammatory medication. In the 7 years since - I HAVE lived a relatively full and normal life. I've been able to go out and do things, get exercise, make my body even stronger than it was before this whole thing started (which isn't really saying much). I've taken better care of myself than I would have otherwise. I even became almost entirely asymptomatic from June to December 2016... but the nature of these kinds of things is that pain comes and goes, and flare ups can happen any time.

The past 4 months I have been dealing with the biggest flare up I've ever had. The pain is the worst it's been since the first onset 7 years ago.

Do you know what it's like for your first thought each morning to be "this is going to suck"?
I open my eyes every morning and dread moving. The first movement of the day is one of the most painful. Getting out of bed is a process that involves sort of hoisting myself up with an arm while trying to keep my back straight. I slowly ease onto my feet and feel the grating of bones in the joints of my back and hips. I am made of gravel. The only way to make it better is to purposefully invite more pain as I work the joints until they've warmed up. This involves air squats. Various yoga positions. At 5something in the morning next to my bed.

Putting on pants every morning is terrible. The little hunch that is required to reach my hands and feet together while I'm standing makes me wince. I hold my breath. Then putting on shoes is dessert I get to look forward to. I think I'll take seconds.

Getting in my car is making the choice of EITHER taking the pain of contorting my stupendously long body as I support my weight and bend through the whole spine while I carefully sit OR the pain of the jarring impact when I throw my stiff body into the seat to minimize bending.

I constantly feel like my back needs to pop, but it won't. Even in the immediate aftermath of an "overall" back cracking - I feel like that one spot that really needed didn't get there. It's like successfully cracking all of your knuckles except for the one that was bothering you in the first place. It's like the itch you can't scratch. This wasn't a problem six months ago. I have had needed a pop for 6 months, and my wife, the chiropractor, and even my sister-in-law haven't been able to make it happen.

In the meantime, I have had to set out in sports, push through pain and regret it later.
I have told my wife I can't do things she wants to do because they hurt too much.
I have had to bail on social activities.
I have had make accommodations for myself at work. I pushed for a sit-stand desk. I take fake trips to the bathroom or the water cooler just to move some. I find empty conference rooms so I can do stretches. Today I had to leave work early to fight our wonderful medical system.
Tomorrow I'm going to miss playing beach volleyball with my team, which makes me sad.
I'm not looking forward to living up to the commitment I made to play golf next Tuesday.

Being in chronic pain is having a constant reminder that your body is limited. You are limited. The time you have here on earth is limited... and that limited time is further limited to that time in which you are physically and mentally capable of doing things. Having a busted up body breaks the spirit.

People don't want to hear about it, so I don't want to tell them. One of the single biggest and most important topics in my life I can't really bring up. If I did bring it up, I would be constantly bringing it up - because the pain is a constant reminder. If people do hear I have back problems, their first assumption is the wrong one. He's tall. Tall people have bad leverage working against them and their backs suffer from it. I hear advice from people who are trying to be nice and help out someone, but they are helping me solve a different problem that I don't have... or maybe just the problem I don't have yet.

I try to sleep in positions that don't push my head forward; because I fear one day that will be the only position I'll have left.

Most of all, I'm just tired. If you start to Google the phrase "undifferentiated spondyloarthropathy", one of the suggested autocomplete is "fatigue". I'm getting my usual 7 1/2 hours of sleep so far in 2017. I know this because I measure this... but I never feel really "awake". My focus lacks. My brain wanders. My eyes droop. I'm constantly considering the merits of napping. I've taken more naps in the past 4 months than I recorded in the previous 2 years before that. I fantasize about sleep. I make plans to get to bed earlier and earlier. Even now I'm debating whether this Column is worth finishing tonight. It's exhausting to be in pain all the time. You are constantly fighting just to be normal. With the fighting comes fatigue. With fatigue comes lethargy. Lethargy presents symptoms that look an awful lot on the surface like plain old depression. I am Jack's complete lack of inspiration and motivation to do anything.

That feeling is made worse by the complete failure of things I have tired to do to help myself that haven't done any real good. This month my 30 Day Challenge was dedicated to getting #BACKtoHealth. I read about my back and things I can do to support it. I have gone to two separate doctors and made appointments with a third for their next availability. I have fought a new pharmacy to get a refill on a prescription I haven't ever filled with them. I was supposed to be getting back into exercise as soon as I felt physically capable... but I haven't felt that way. I have felt worse, actually.

I played golf for the first time in 5 or 6 years... and somehow it caused my chest, shoulder, and mid-back to be as painful as the low back. I couldn't catch my breath for days, because breathing deeply was stabbing my chest. Suddenly my routine of hoisting myself from a laying to sitting position meant feeling my ribs flex and shift as they found a new position they liked. Sharp pains under my left shoulder blade jab me when I try to mobilize my low back or my neck. I am constantly holding my entire torso in a tense, flexed position. I feel like the town drunk who's wearing a barrel for clothes. I've gotta keep my shoulders tight to hold the barrel up and I can't bend one bit. A game that 80 year olds play to keep fit wrecked me for over a week. I'm only now starting to feel a bit better.

All in all. I'm still grateful. Bad times make the good times sweeter. I have enjoyed a long stretch of asymptomatic eyes. With regard to the back - I know that there's probably a light at the end of this particular tunnel... but I also know that after I reach that light, I'll find myself in another tunnel before long. The best I can hope for is long stretches of track that are tunnel-free. I have thought "any day now I'll feel good again" for the past 5 months... and know I will feel good again.
Any day now.

Now for something completely different.

Quote:
"Watch out. That goose is going to kick someone."
- Chuck, my new favorite quote generator -