Motto: I Will Never Understand You. When Will I Stop Trying?

311 is Melissa's favorite number because she likes (or liked?) the band "311". #FunFactRightOutTheGate #MisplacedHashtags

Often times it takes years to realize you probably shouldn't have done X or Y. You make a choice and take an action, see the consequence and immediately write it off as the only possible eventuality that could have occurred. You're a rational person. You made the choice. So it had to be a rational choice, right?

It happens as you get older.
First, you look back at yourself in elementary school or middle school and think "WHY!?"

Why were you so scared?
Why didn't you make more friends?

Then, you look back on yourself in high school and think "DUDE!? WHY?!"

Why didn't you think about what you wanted to do when you grew up?
Why did you hate how skinny you were, but do nothing to change it?
Why didn't you go out and do more things with more people more often?

Later, you look back on yourself in college and think "IF ONLY".

It's when you get to the next phase of your life that you can properly look at the rear view mirror and say "how did I get here anyway?". Then you look at all the things you've learned in that rear view and you use them to tell yourself "Now I've learned. Way back then I was a moronic kid. I'm older now. Now I know more. Now I'll won't make silly mistakes."

What if you're in the longest phase of your life there will ever be? When do you look back? Surely you can't wait until retirement to realize what you should have been doing all along. I think that's what midlife crises are about.

Lately I've noticed the cycle between "choice" and "regret" has shortened immensely. It is humbling to realize I am not, nor will I ever be, infallible.

I'm still self-analyzing after 28 years... and don't reckon I'll ever stop. My tattoo means many things to me, I change the meaning depending on who's asking. It has roots in mathematics, religion, and history. It is an eye, which has a symbolism of its own, removed from the specific instance I have on me. I think, to me, most of all, it means "look into yourself."

I'm struggling with one thing. that will be the thought I'll leave with, but first I want to wrap up the above.

I haven't been perfect. I continue to fail on an almost daily basis. But overall, I've think I've done it. I haven't lived life free of regrets, surely; but for most of the things I expected I would regret, I really don't.

Do I regret pouring so much of my energy and time into girlfriends I had growing up?
I could have had so much more fun.
I could have been worried so much less of the time if I were more care-free.
... but if I hadn't made those choices, I wouldn't know what I liked in a partner. I wouldn't know what I don't like. I wouldn't have the wife I have today, and I wouldn't have the life I have today. For those two facts, I wouldn't change a thing. It sucks that I had to go through years of growing pains, but the benefits were more than worth it.

Do I regret developing some sort of autoimmune disorder? It's not a choice I made, but the same basic realizations hold true. I wasn't taking care of myself. I wasn't making good life choices with respect to food, sleep, and exercise. Obviously, given the pizza from before I'm still not perfect (the right amount of pizza is "none"). I struggle daily with symptoms... but the days without them are all the sweeter for it.

That's not the struggle I wanted to leave off with. It's something I've thought about writing many times over, but I'm going to elect again today to not address that struggle.

I struggle with the fact that some small choices, ones you've made hundreds of times over in the past with zero consequence, can be the ones that you come to truly regret.

Who knew playing basketball in those shoes would cause me to lose a toenail? I've played basketball in new shoes before without problems. Who know that toenail would grow back with a mind of its own? Who knew I'd still have problems 290 days after making such an inconsequential-seeming decision?

What did I learn from those things? How do I know which of my next seemingly inconsequential decisions will be the one that does me meaningless harm?

I'm struggling with the fact that big things have little beginnings.

Writing accomplished. Now I'm contractually obligated with myself to have a picture in each post, so this is whatever photo I find that's convenient: 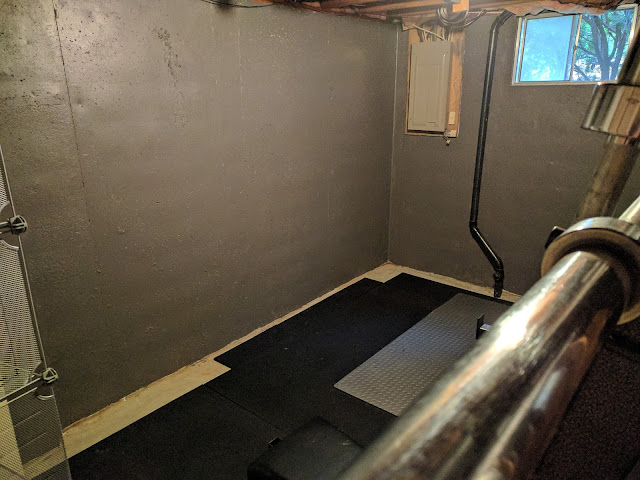 Melissa and I painted the walls of the gym. It's starting to look more and more like a gym.

Top 5: House Projects I've Had In Mind Since Day 1
5. Setup the home office that we wish we had in college - COMPLETE4. Finish converting the storage room into my perfect homegym - NEARLY COMPLETE
3. Get Melissa the music room she's always wanted - PENDING2. Complete a home theater setup that makes staying at home to watch a movie as engaging as going to the cinema - PENDING1. Give the work space in the garage a lift, literally and metaphorically - PENDING

Quote:
"Do you guys have any non-old-people cereal?"
- Krista -

"You mean to tell me you've never chokeslammed a baby?"
- Nick -