Motto: Sentences that Begin and End with the Same Word are My Favorite Sentences.
Before this 30 Day Challenge I wouldn't really have understood the title I used for this Column.
Writing an Android App. That's the goal for March. Technically I accomplished that within the first day, within the first hour. Although "Hello World!" isn't much of an app. I've been working through Udacity's Android Basics nanodegree. Well, the coursework that one would do to earn said nanodegree. I'm more interested in the knowledge than the resume boost.
Anyway it's been really good! It's aimed at people who have never coded before - so parts of it are definitely too easy... but that means I'm not getting left behind, like I did last time when I tried going straight into the Android Developer nanodegree. I'm now starting to get comfortable playing around in the IDE, making my phone do stuff I want it to do. It's my goal to write an app that's actually useful by month's end. Even if that use isn't my final goal. Ultimately, I'd like to create some form of the Life Tracker in Android. For now, I'll settle for something to supplement it. 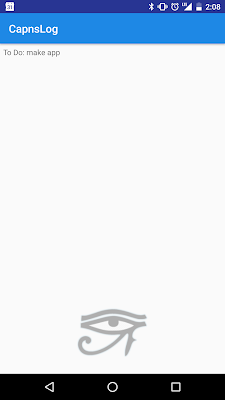 Udacity is one of the coolest things on the internet, by the way. Free education for anyone who wants it. That's alright by me.
Completely shifting gears:
My first world problem for the day - I feel guilty. I feel guilty for shopping smart.
A while back, when I got my first job, I decided I was going to be high-and-mighty & never, ever, shop at Walmart. Radical. I know. This was because I worked at Walmart for a summer. It sucked. I found it degrading, physically demanding, and low-paying. I was lucky, at least I had a light at then end of a tunnel. I was a college student getting a financially lucrative major, with a safety net in the form of my ever-supporting parents in case everything went to hell. Not everyone there was so lucky. I had more coworkers who had no future prospects than those that did. Walmart to me was exploiting its workers and raking in billions.
So I started shopping at Target. Amazon.
Am I a moron? Are they any better, at all? No. There's a problem with these huge, buy-anything-you-want conglomerate stores. They are cheap. They are ever-present. They are a consistent source of the basic necessities and they will not be undercut.
I found myself in a bookstore today. I stumbled across the graphic novel "Fight Club 2". Chuck Palahniuk's follow-up to his smash hit "Fight Club". Now, I'm a walking cliche - so I liked Fight Club. I was interested in the sequel so I picked it up off the shelf. It's a graphic novel, so the book was wrapped shut. Not a big deal, I was going to buy it... until I saw the price. $30. I thought "wow that's a bit steep for a book", so naturally I pulled up the Amazon app on my phone. Amazon has it for $20. It will be at my house in 2 days.
I suck. Not 3 minutes prior I texted Melissa "I just found the coolest store. They sell everything we like." To thank them I've done them zero good. I've given them zero support. They are a specialty store, therefore they cannot afford to make fractions of a penny on things they sell. For that reason, I don't buy stuff from them. When their business dies, it will be the fault of me and people like me. I am the guilty middle class consumer.
I was going to write about budgeting and the benefits of not buying crap... but I'm out of time. BYE HAVE FUN SEE YOU LATER.
Top 5: Website I Would Pick If I Could Only Go to Five for the Rest of My Life
5. Google Docs - creating new content.
4. Facebook - for communication.
3. Google's Search - even if you can't click on the links, you can learn a TON from reading link synopses... also you've got a calculator and the knowledge graph. Most of Google Maps is accessible without actually going there.
2. YouTube - Arguably this should take the #1 spot. You'll never run out of entertainment content. You can learn anything you need to learn.
1. Wikipedia - the Hitchhiker's Guide to the Galaxy is essentially just Wikipedia. It's pretty much all you need to know. I put it as #1 because I like it; although YouTube is probably more useful for any in-depth learning. Udacity, the thing I opened this Column with, is built on top of YouTube.

Quote:
"Love people, use things. The opposite never works."
- The Minimalists -