Motto: Dr. Jan Itor
Follow through... follow through is the topic I want to talk about for this Column.
Actually let's talk about something else.
It goes without saying at this point that I'm a huge fan of the Marvel Cinematic Universe. The movies are entertaining across the board, with some really great standout characters, moments, scenes, and laughs. The television shows have been entertaining on the whole, with some shining examples of great writing. The Netflix shows have been great. Most impressive of all, the organization of the whole lot has been nothing short of phenomenal.
But.
It's not perfect. There are a few things I wish were different. I wrote some stuff that used to be right here, but you'll see it later in the Top 5.
February is almost up, which means I'm nearing the end of my CostCo 30 Day Challenge. The basic idea was that I was going to only eat food I got from CostCo. What I hoped to accomplish from this was 4 fold:


Even though we're still 4 days from the end of the month, I'm pretty sure I know the takeaways...

The Bad:
The Good:

The Meh:
The data from February contain too many confounding variables. Even after doing my best to strip out some of the noise and account for things that obviously should be accounted for (e.g. the $360 CostCo trip in late January that carried well into February), it looks like I saved less than $100, if anything at all. I expected much more dramatic results.
I guess you live and you learn. That's the point of these things, right?
30 Day Challenges are essentially just me listing out things I want to do better at and trying them one at a time. Draw more. Eat out less. Exercise more often and with more variety. Use technology less. Go new places and try new things. They are cliched goals, but just because they are "basic" doesn't mean they are less worthwhile. Pumpkin Spice lattes are good. So what.

MARCH'S 30 DAY CHALLENGE: something related to exercise. My body has been trying to bring me down for the past 3 months. I'll get it nailed down before March 1st.
Photo to go out on - maybe be the best selfie I've ever taken. 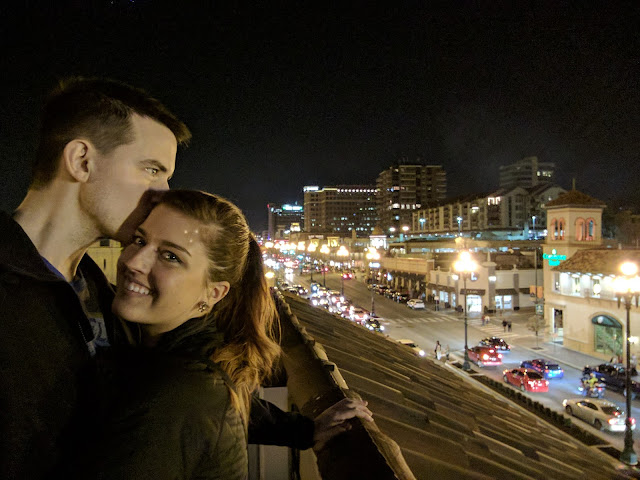 Top 5: Low Points of the MCU
5. Black Widow & Bruce Banner's love plot - this really came out of left field. I don't hate it, persay. It had been set up for a while that Black Widow and Hawkeye might be a thing, but I like what the did with Hawkeye's farm & family life even better than going forward with that. I don't even hate that Black Widow and Bruce Banner could be a thing... it was just done really suddenly. It felt like we jumped into the middle of a relationship without seeing it set up. Also, I liked having a female character who wasn't anyone's love interest. That's gone now.4. Iron Man 3 & the Mandarin - most people will say the Mandarin should have been the actual Mandarin. Ben Kingsley was wasted on Trevor Slattory and a story involving the real Mandarin would have been better. I didn't actually hate this twist. I put it the list here because I know this is a popular opinion.3. Iron Man 3 Ending - MY opinion this time... Pepper Potts should have died. She fell to a fiery death near the end of the movie. Five minutes later, there's a scene obviously tacked onto what should have been the ending of the movie that completely ruins it. Tony's satisfying defeat of the villain is negated entirely by him surviving what should definitely have killed him, spouting off a way-too-on-the-nose bit of dialog, Pepper miraculously surviving what should definitely have killed her, then killing the bad guy by kicking some random explosive thing that happened to be on the ground and shooting it with a Iron Man's repulsor. This is out of character, for one. It undercuts all consequence of the story and any lessons Tony learned in the story. It robs us of any long-lasting weight... and we haven't even seen Pepper since this anyways! She should have stayed dead.2. Agent Carter Season 2 - basically the whole thing. They turned strong Peggy Carter into a little girl with a crush on two boys. The big bad had a murky at best motivation. The season finale was centered around a plan in which they lured the supposed super genius Madam Masque out to walk in front of a huge, trailer-sized gun in the middle of the street, hoping she'll just walk in front of it. Worst yes, that's exactly what happens. Then there's a season-ending cliffhanger that will never be resolved because the series was not renewed. Agent Carter should have been ONE season - and that season should have just been an expansion of the pre-existing Agent Carter one-shot... which is not canon now? Ugh.1. Marvel's villain problem - Iron Monger, the Abomination, Whiplash, Red Skull, Killian Aldrich, Malekith, Alexander Pierce, Ronan the Accuser, the Yellowjacket, and the no-name villain from Doctor Strange (Kaecilius) what do they have in common? They were all underdeveloped, given poor motivations, and killed off/sent away & unlikely to return. Their motivations range from "went crazy just cause" to "want to destroy the universe just case". At best they are just "I don't like you because I'm Hydra", which I guess works. Loki and The Winter Soldier have really been the only two villains worth remembering - I literally forgot to write Ultron in the list up there, and you didn't even notice. HE SHOULD HAVE BEEN GREAT! Ultron is such a great character!
Quote:
"I come up with new and innovating ways to get other people to do work for me."
- Chuck -