This year I am back to my 30 Day Challenges. They bring a variety to life that I quite enjoy. I missed the feeling that the next 30 days might have some lasting impact, might reveal some hobby or trend that you wouldn't know you'd like, or might just be made slightly more interesting. Truthfully I don't know what I'd be doing if I wasn't always trying to better myself in some way. I feel like I'd just immediately get fat and give up on everything. The end of the year last year I fell off the horse... mostly due to an injury. But its lasting impact was the realization that, after 30+ days of not exercising, you sorta feel crappy all the time.

So I lifted weights earlier (a lot earlier, this post was several weeks in the making) in my home gym. Which is awesome. Even more awesome once I finish it. Flooring. Walls. Maybe paint up the unfinished ceiling. Could make for a cool (if a bit expensive) 30 Day Challenge, actually.

That's not this month, though. This month's 30 Day Challenge was to draw a self portrait that actually looked like me enough that someone who knows me could say "hey that looks like Aaron" if they saw it.

What follows are the 12 drawings I made in January. 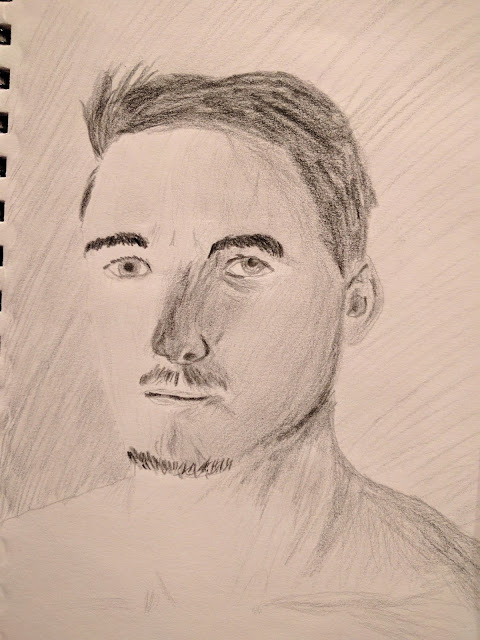 That was honest best effort at the time. I was pretty excited cause I thought "hey that looks kinda like me sorta!" My standards were a lot lower. 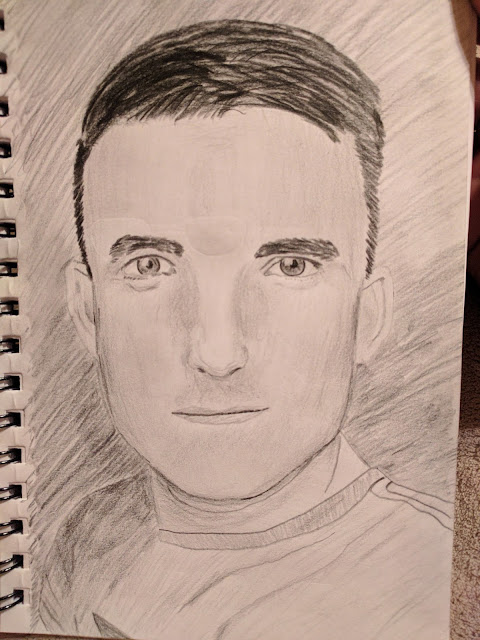 There are elements about this one that I very much like, but a larger number I do not like at all... and ultimately it doesn't look much like me. 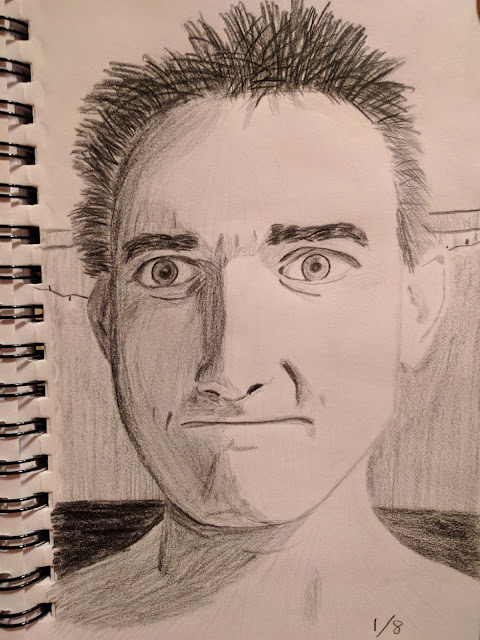 This is the first one I drew that I think I would recognize as "that's supposed to be me". A friend told me "it looks like you because you didn't have a shirt on. 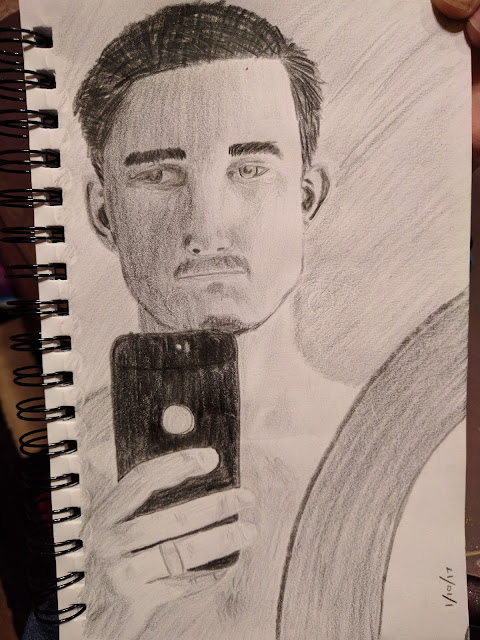 One of the only times I've tried drawing a hand. I drew a derpy eye. 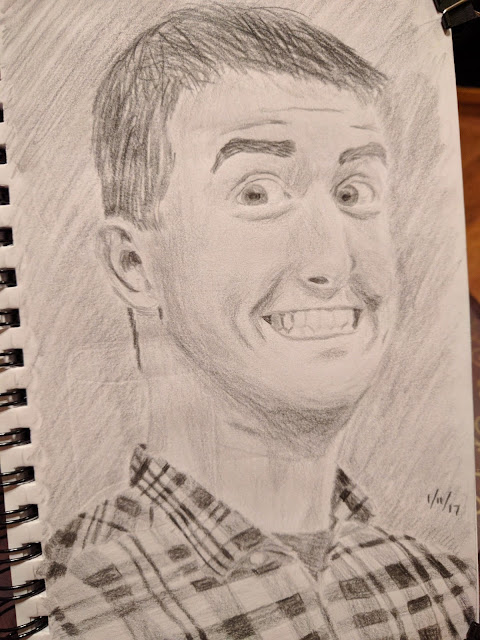 I like this one a lot. Was my first time drawing plaid, also teeth. 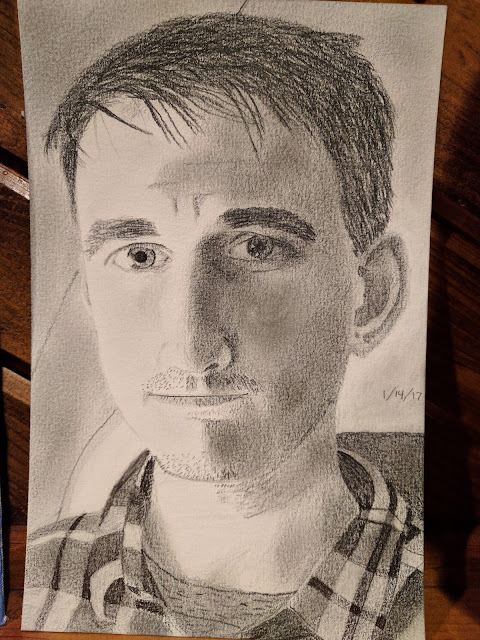 Between #5 and #6 I ran out and grab some better sketching paper & some actual sketching pencils (as opposed to the Crayola Black pencil I had been using). With the new tools, I decided to put in some extra time. I spent probably somewhere north of 5 hours on this one, significantly higher than drawing #1 which I knocked out during an episode of "Agents of S.H.I.E.L.D.". I didn't really know how to blend well just yet and there are a couple of proportions I'd like to change, but this is probably the best "Aaron's face" I've drawn to date. After doing this one, I decided I needed to diversify my drawings or I'd get get tired of drawing me over and over. 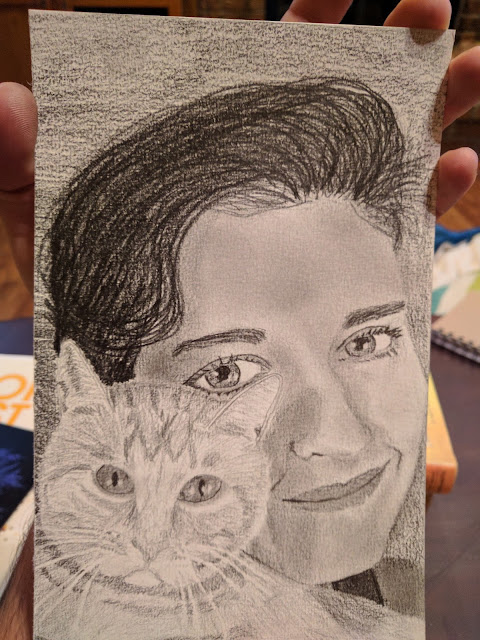 This was the first time I've ever managed to draw a girl that didn't like like a dude in drag. 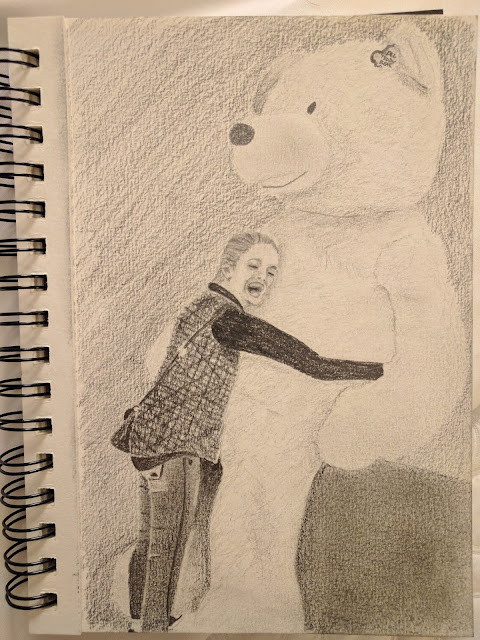 When I decided to start drawing other people, this was the first picture that came to mind. It's my sister-in-law hugging wholesale-sized stuffed bear from Costco. It was the first time I set out to draw a full body, which didn't give me much trouble until I started trying to draw her butt. You ever draw your sister-in-law's butt a half dozen times? I have.  She went from Kermit to Sir Mix-a-Lot style butt and back many times. It was weird. Also - drawing faces that small made correcting errors basically impossible without nuking the whole face with the eraser. 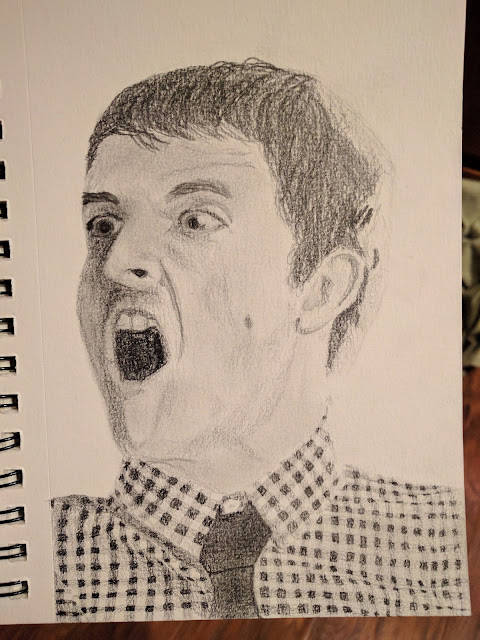 Next in line for "photos I have to draw" was a picture of Nick from my wedding reception. Nick didn't know I was drawing this month, so I decided to sign it with a little heart and leave it on his desk at work. 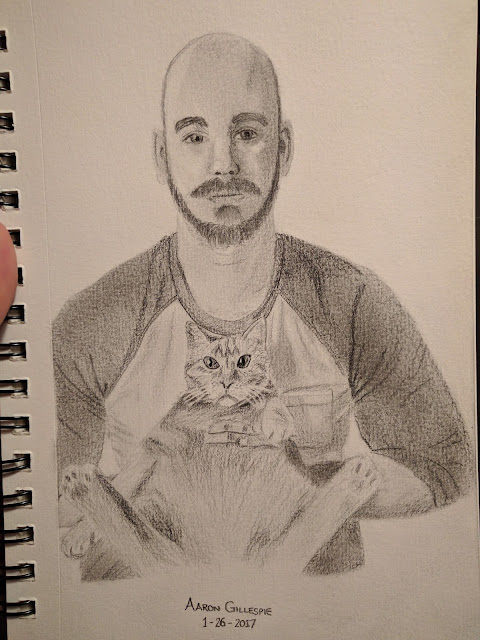 This was fun to draw. The photo was too good to pass up. Loki is mad cause I have drawn Thor twice and haven't yet drawn her. That's some cat owner humor right there. 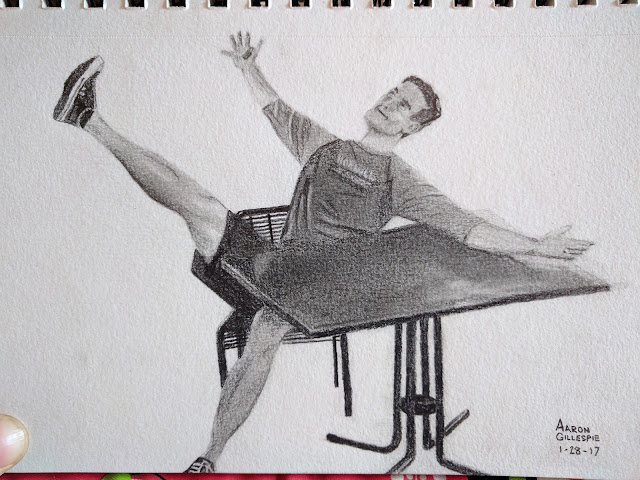 This is one of my favorites, but was the most frustrating to draw. The paper looks much whiter because I took the photo with natural lighting. Probably should have done that for all of them. 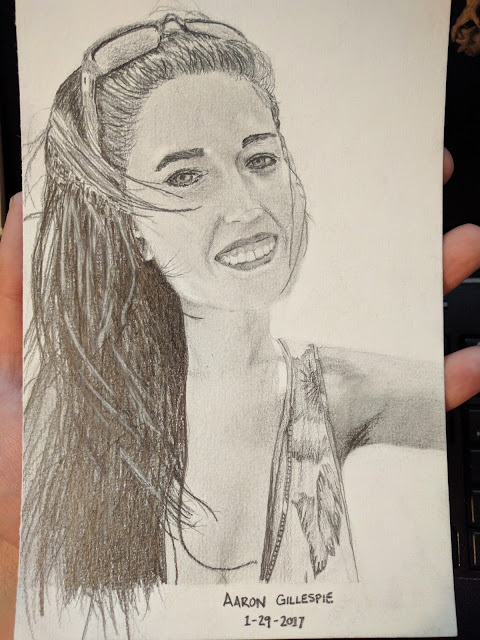 I didn't like my drawing of Melissa the first go around. I wanted to my 12th and final drawing to be a real challenge - I tried drawing one of my favorite pictures. You ever try to draw something beautiful? It's tough, dude.

Totally unrelated: I saw La La Land. It was good.
I like movies a lot. Enough to have majored in Film in college. Not enough to have finished that degree, though... and I'm glad I didn't. Not because I have a cool engineering degree now and I use it to work a cool engineering job, but because if you've got a film degree you're contractually obligated to hate blockbuster movies (e.g. anything by Marvel) and socially required to suck up to other people.

In not-so-chill news - December 10th I pulled a muscle in my back. After several weeks of "taking it easy", the muscle stopped bothering me and I started getting back after it some... but my extreme low back just started bothering me all the time. After about 6 months without any issues, I remember now what it's like to have chronic pain. I know it's temporary, though, and I cannot tell you how much you appreciate life and movement and all the little things when it's gone. Hopefully this flare up passes sooner rather than later.

Just thought I'd end that on a downer note. YOU'RE WELCOME.

Actually I'll end it with this photo to go out on: 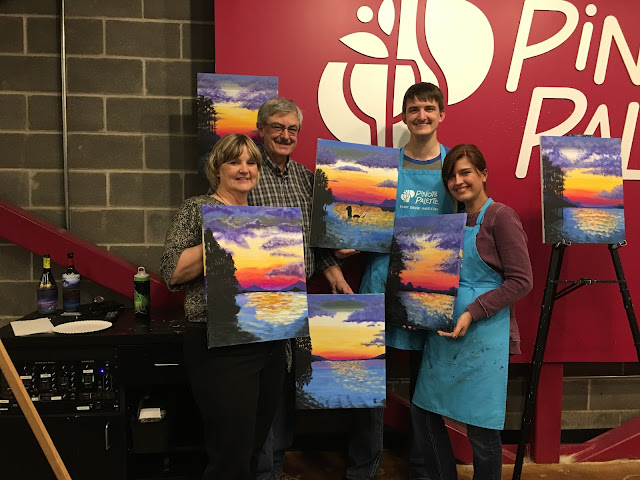 Top 5: Favorite of those Drawings
5. #6 - Me that looks like me... because it was the first time that I drew somebody well enough that I think most people would recognize who I was drawing.4. #12 - Melissa... because it is better than the first one. I literally just finished it so I'm docking it points intentionally due to timeframe biasing. It's not perfect, so it doesn't live up to the subject matter. 3. #9 - Nick... because it makes me laugh.2. #10 - Jon with Loki... because it was easy and fun to draw.1. #11 - me in the chair... because there's nothing about it that I'd like to go back and fix.

Quote:
"Everything works out in the end. If things aren't working out, it isn't the end yet."
- genuine quote I like -