Motto: Upon this rock, I will build my church.

If the motto is sacrilegious, I apologize. I'm not referencing Matthew 16:18, I'm referencing Ultron. Ultron intended to use Vibranium to carry out his Sokovian meteor to end all mankind, I intend to use my new homegym setup to carry out my plan to become gigantic. This is my rock: 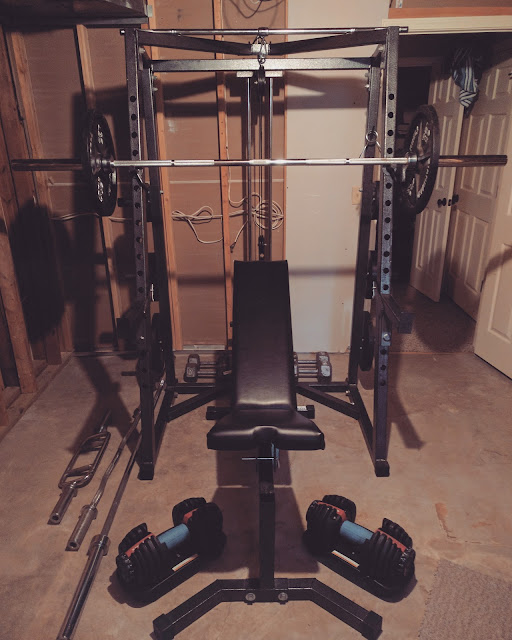 It's not done yet, but it's done enough that I just completed a full-blown workout on it. Squats.
Overhead Press.
Curls.
Lateral raises.

I did those things in my own basement yesterday. Today I am sore from a homegym exercise. These are exciting things.

Speaking of exciting - Google's big hardware announcement is tomorrow. They are unveiling the next generation of "Nexus" phone, which will take on a new branding. That I'm not so excited about - but they're going to do OTHER things which I am excited about. Google Home, for instance.

Most importantly of all, it's rumored that they will tease "Andromeda" - the long-rumored Android/Chrome OS hybrid operating system. I am sincerely hoping that Andromeda takes over for both Chrome OS and Android and becomes the one, unified operating system that takes all the best things about Android and all the best things about Chrome OS and intelligently weaves them together to create something that's greater than the sum of its parts. I'm ready for it. I said in my last Column that I haven't seen anything impressive in tech in a while... this could be something exciting. I'm setting myself up to be massively disappointed, but my hopes are raising (rising?).

Marvel's Luke Cage is on Netflix. I've only seen the first 4 or 5 episodes - but it's quality. So far so good. I'm really excited to continue watching (whenever Melissa gets time enough to watch a show!) to see how the remaining 8ish episodes play out. I don't have much else to say about it yet - I'm just going to go watch some more!

Oh, and it's October. I'm re-re-restarting my now annual October tradition: The Incredible Bulk. Now that I've got a home gym, things are going to get real. See you in a month when I'm the biggest guy in the room.

Top 5: Google Apps I AM Impressed With
5. Google Search - literally has to be on this list, you know it's the best4. Google Keep - was too simple when it came out, but the addition of #Hashtags really put it over the top for me to become one of the two apps with widgets on my homescreen3. Google Docs - collaboration aside (which is its killer feature), Google Docs is surprisingly fully-featured... I built the Life Tracker in it2. Google Photos - a category-ending product, nobody can do photo storage better (so far as I'm concerned)1. Google Maps - the killer app of the modern era