Motto: WHOA IS ME!
This Column will have some of the same old stuff I usually talk about presented in the same old ways. It will also have some different new stuff that I'll be saying about the same old stuff. Be prepared to hear about Google, GoPros, and Marvel - along with maybe some other stuff along the way.
This first part is a bit of a downer - fair warning.
Overall I'm not impressed with consumer tech any more. I'm not saying I think it's "for granted" that we carry around this amazing device in our pockets that is capable of doing more than the collective capabilities of a nerd from the early-90's entire electronics collection. I'm saying that we reached "peak phone" somewhere around 2014. The first time someone made a phone that had a screen that was bigger than 4.5 inches, with a decent camera. Ever since then each successive phone has been a minor iteration of the already amazing foundation laid by its predecessors. There have been some "nice" features - notably fingerprint sensors have been a nice addition - but nothing that really gets me excited.
We've narrowed down what a "smartphone" should be. No phone nowadays is meaningfully different than any other. Even the line between iPhone and Android as a whole has become so blurred from their mutual feature stealing/user interface copying. Granted, they are still just different shades of awesome.
I listen to multiple tech podcasts - but I find myself becoming less and less interested because they have less and less to say. The new iPhone is out and it's most note-worthy features is its LACK of a feature. Google's next "Nexus" phone is being announced October 4th - a fact that I only know because some other people cared enough to bring it up. My Nexus 6P is plenty good. Google would have to come WAY out of left field to do anything with their upcoming "pixel" phone that would make me consider making the upgrade - a thing that I used to just consider "a given" for a person of my interests.
Furthermore, with respect to just GOOGLE for a minute, here, their hit/miss ratio has been going in the TUBES over the past few years. I used to use literally every app, platform, and feature that Google offered. YouTube, Android, Google Search, Gmail, Google Docs... how can only ONE company make so many awesome things? Possibly because they make so MUCH nowadays. As they have expanded, it's become impractical to use all of their stuff... but it doesn't matter because much of it is half-baked, questionably useful, or already has well-entrenched, better options available... usually made by Google itself!
I'm tired of complaining - so, for a bit more on what I'm talking about, see the Top 5. Until then, it's happy fun thoughts!
I think the next big "revolution" is going to be augmented reality. Not some goofy headset that you wear that separate you from the world you live in - but a device that blends the real world and the digital world seamlessly. A thing that can replace your phone, because it does all the same stuff & does it better. I don't need to carry a physical thing in my pocket that I have to carry around. I want the user interface in my vision. I want the Iron Man interface, with a Jarvis to boot. The day we can do everything we do on a phone on a device that looks & feels like a pair of ordinary glasses.
Owning a lawn means you get a lot more chigger & mosquito bites.
GoPros are a thing that haven't really improved all that much since the GoPro Hero 3 Silver I bought a long time ago (the one that Nick lost in a river). My Hero 3+ Black was a minor improvement over the 3 Silver that Nick lost (and subsequently made up for in spades... don't tell him but Nick is one of my favorite people in the world). The Hero 4 came out, and I didn't really give it much serious thought.
That was the case until they announced the Hero 5 & Hero 5 Session yesterday. I'm impressed with the actual value-add features they've put into this year's model. Most notably, they removed the need for a case if you're going in the water! That means you don't have to choose between sound & water-proofness. You don't really have to worry about accidentally forgetting you have the non-waterproof back on your camera and ruining it. They also added a touchscreen on the back, and purportedly did so while increasing the battery life? What? They are also pushing their video stabilization as a new killer feature... time will tell on this one. The addition of the GPS, voice control, and overhauled user interface are also nice perks.
While I don't think the improvements made to this year's GoPro warrant the purchase of my 3rd GoPro - they DO seem to be good enough for me to suggest "maybe get the newest one" to anyone looking to buy a GoPro.
This Column is longer than I meant to write, and I don't have the time to make it shorter, so I'm going to keep my next piece about Agents of S.H.I.E.L.D. shorter than I originally planned.
Agents of S.H.I.E.L.D. season 4 premiered this week. I was sorta looking forward to it, but not nearly as much as last year. I wasn't too sold on this "Ghost Rider that's not really the official 'Ghost Rider' but still has most of his traits" thing... but I have to say I was pleasantly surprised with the first episode. It was pretty good! I hope this season is coherent & that the show remains entertaining. Oh, and Ghost Rider looked pretty cool, actually!
Picture to go out on - literally my first interaction with the Google Assistant in its new "Allo" messenger: 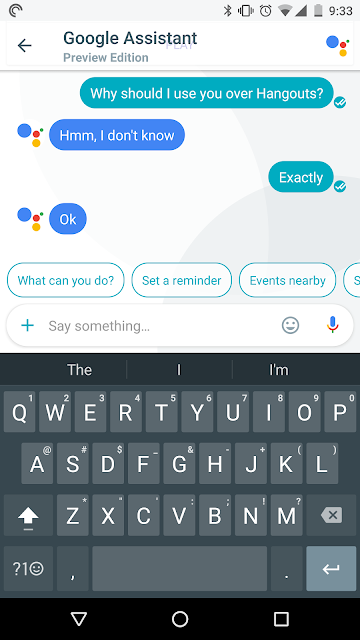 Top 5: Google Messaging Platforms, in Chronological Order
5. Google Chat - a great, inter-operable messenger service that was all the places Google was! AKA dead. 4. Hangouts - one place to handle all your messaging needs! AKA the thing that Google is slowly stripping of features, never really worked all that reliably for many people, and continually crashed my as-pure-and-up-to-date-as-possible phone.3. Messenger - Google's primary SMS app! AKA a pretty solid SMS app that Google itself recommended using over Hangouts.2. Duo videochat - a stupid-simple video messaging app! AKA Facetime! Or just one small part of Hangouts, but with the best features removed!1. Allo messenger - a messaging app with Google Assistant built right in! AKA the messaging app that I installed, just to look at, then texted my friends about saying "yeah I'm not going to recommend that we all jump on board this new thing."
0. Google's eventual RTC client... maybe that will be the good one?
Quote:
"I think Chuck cares about donuts most of everyone"
- Danielle -