Last Column was very... focused. This time the glasses are coming off. Things are going to be nice and out-of-focus. I'm going to hit up the many things I've made not to write about since the two Columns ago.

Idea for a novel:
There's a large facility for cryogenically freezing people with terminal illnesses that has a few hundred of people on ice, including the protagonist. One day, the facility loses power & these hundreds of terminally ill people are unfrozen. They find the facility empty, but in tact. The nearby town is much the same. No damage, just no people. The book tells the story of these few hundred people as they try to figure out what happened, if they are the only humans left, and if they can even repopulate the earth before each of them goes from their own terminal condition. I'm aiming for post-apocalyptic without the apocalypse. Sort of an "I Am Legend" without the vampires & where Will Smith is hundreds of terminally ill people mixed with "The Martian" without being on Mars.
I'm not writing it. You write it.

I really appreciate good speakers. I enjoy listening to people who show a unique command of the English language. I like to imitate people with particularly pleasing patterns of speech, interesting intonations, vivid vocabularies, fantastic phrases, and/or an expressive, exquisite, exotic or eclectic, ear-catching and enjoyable eloquence. It is my ambition to become an ever-better story-teller, clearer communicator, well-woven writer, and outstanding orator. I want a large toolbox, full of techniques to handle any situation.

Speaking of large toolboxes - now that I'm a homeowner, I literally want a large toolbox. I've converted my very simple L desk into an L desk where the bottom part of the L is now cut out, with a shelf accessible from either side. My plan for today/tomorrow is to use the wood I cut from the back wall of the desk to create a drawer for the other side of the desk. Never before have I appreciated so much what my dad has built with his collection of tools. I was using a jigsaw to do things that I know a circular saw or a table saw would be more adept at doing. I have really enjoyed creating stuff from nothing. I think it will become a thing that I do. My first project went fairly well, I'd say. 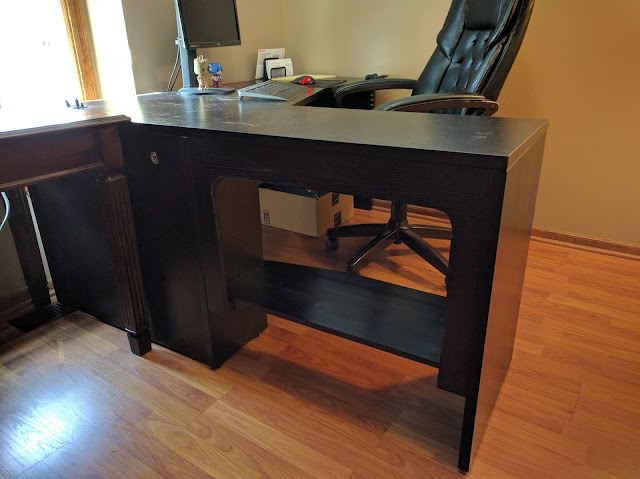 As part of my newfound appreciation for building crap (remember how I just said I appreciate good writing?), I have decided to not cannibalize the garage workshop that I inherited when I bought this house, turning it into the home gym I've always dreamed of. Instead, I am pretty sure I will utilize the unfinished portion of my basement as the gym. This was suggested to me by many people, and for good reason. It makes a lot more sense. I'm sure I'll write more about the aspirational home gym in the near-ish future. Suffice it to say for now: matted flooring, adjustable bench, half-rack, Olympic bar, 4 45s, 2 35s, 2 25s, 4 10s, 2 5s, some Olympic rings (maybe?), and a way to accomplish cardio. The space is ~14x8 ft, air conditioned/heated, and can be upgraded.

Grilling is like cheating. Melissa and I have used our new grill about 10 times so far. We've achieved a 100% deliciousness rate. To be fair, Melissa did 9 out of those 10 times, but hey - I nailed it on that one time I made porkchops. I'm a fan of any cooking technique that lets you mass-produce foods.

For the past ~2 years I bought into the notion of the "PC Master Race". For those not familiar, the basic idea is that people who buy video game consoles are dumb and that the PC is the one true place to really play games. For a while, I would have fought you if you disagreed with me. Battlefield 4 was my prime, shining example. It was good on the PS3, but great on the PC.
Times have changed, though. New PC games (like the new Hitman game) don't run so well on my now 1.5 year old PC. "No big deal! The best part about PC gaming is the ability to upgrade your rig in a piecemeal fashion, thereby saving you money in the long run!" Yeah, that's bologna. The cost of the next-level-up graphics card (which isn't even the new-hotness anymore) is FOUR HUNDRED FIFTY DOLLARS. You know what else I could get for $450?
A PlayStation 4, spare controller, and 2 games.
- or -
An Xbox 1, spare controller, all the Halo games, and still 2 more games.
- or -
A Wii U, Nintendo 3DS XL, and Super Smash Bros for both
Any of which is guaranteed to continue being able to play games without further upgrade for the next few years. Although at this point, I'm probably going to wait until the next-generation (or the "0.5 generation") of new hardware comes out. That would be "Project Scorpio", the PlayStation 4.5 Neo, and the Nintendo NX.
The other benefit of going the way of the console is that it doesn't promote you sitting tucked away in a corner by yourself with headphones on. It's much easier (read: possible at all) to play local multiplayer.

Top 5: TV Show Theme Songs (Restricted to TV Shows I've Seen)
5. The Simpsons (also, Futurama)4. The Office
3. The X-Men Cartoon 2. BoJack Horseman (which gets a boost by how good its outro is)1. The Unbreakable Kimmy Schmidt

"You guys are telling me the astronauts didn't go up there and make double-stufs?"

"Go downstairs, hang a right like you were going to run into the wall. Stop before the wall"