That monitor situation I talked about in my previous post got resolved. I successfully returned the 4K monitor, lessons learned. Earlier this week I procured this new 27 inch, 1440p monitor. It's a high-end version of the middle-tier of hardware. That's the same philosophy I built my computer with, and that has served me well thus far. Rather than getting a low-end high-tier piece of hardware (like I had), where there were corners cut and expenses spared - this new monitor has a great stand, wonderfully saturated colors, and it came with basically every cable that one could possibly use to connect it to stuff. I'm very happy with the new screen and the new dual-screen setup.

I've been playing a lot of videogames lately. I partially blame Fallout 4 for being such a great game. I partially blame my work for actually being mentally taxing (causing me to have less excess mental energy). Mostly, though, I blame myself for not being ambitious enough. I don't know exactly what I should be doing - but perhaps something more productive. When Melissa isn't in school we'll hang out & play games and stuff... but in the meantime, maybe...

Maybe I should cut myself some slack. I work, workout, play basketball, cook, and clean. It's not like I'm bumming around wasting life.

A new Hitman is coming out. As I've written about before, I'm a fan. I grew up with the franchise. Enjoyed playing it as a kid. Played the last one. Looking forward to their "episodic releases" this year.

The picture to go out on - my new desk setup. 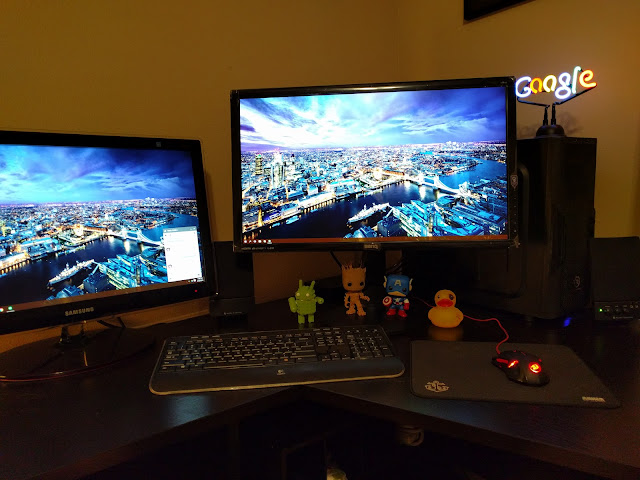 Quote:
"Are you going to not listen to a puppy?"
- BroScienceLife -