Motto: IT MIGHT SEEM CRAZY, WHAT I'M ABOUT TO SAY...
I'm about to write something I promised myself I wouldn't ever write:

"It's been so long since I wrote, I should write in my Blog more!"


I'm making an active effort towards "hobby diversification". I'm not saying I'm about to radically change the paradigm of my interests; but instead I am saying that I want to expand my scope of focus within the realms in which I was already interested. More on this at some later date (I won't continue that paragraph later, you'll just see the results of it).

My Nexus 5 got the Android 6.0 "Marshmallow" update. I was excited. After the update I realized that there was essentially nothing new about the OS aside from a few UI tweaks. Google's "Now on Tap" feature hasn't been useful yet. The permissions model isn't "useful" on a day-by-day basis. Neither is the app-backup system. Overall, I'm much more excited for the Nexus 6P hardware than I am for Marshmallow. Is it November yet?

The picture to go out - Thor getting comfortable in a completely full basket: 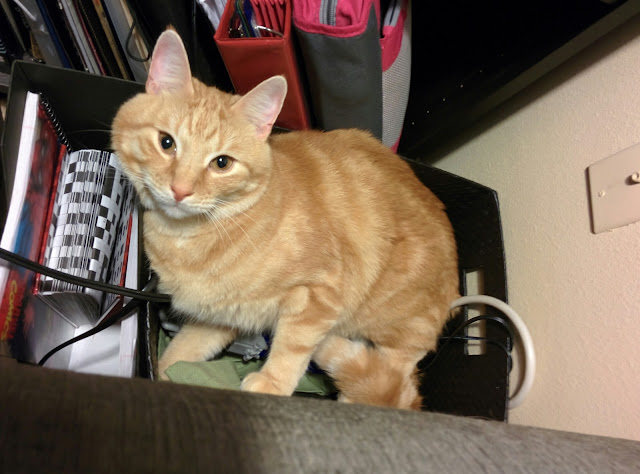 He's literally laying on a power strip and a Nerf gun.
Top 5: Things I've Learned in My Udacity Classes so Far
5. Separating code out into its functional components to make it easier to extend or edit down the line4. MVC frameworks (and other MV* frameworks)3. Git and Github2. How HTML/CSS/JavaScript are related, what they do, and how the web browser renders a page.1. What an "Object" really is, and why/how you should use them. This is ridiculously simple/huge, yet I wasn't formally taught it up until this point. #disappointing
Quote:
"Maybe laser tag isn't cool anymore?"
- Krista -