Motto: Cross another off the movie bucket list
I want a tablet, but...
Tablets are the most fun pieces of computing tech out there - even if they may be the least useful. Their use IS "fun". They are THE BEST general browsing experience you can find. If you have tons of time to kill and nothing to do, nothing beats a tablet. They provide a more compelling user experience than phones. They aren't as cumbersome as laptops. They are portable in ways that televisions and videogame consoles can't be. They are the perfect form factor.
... but they suck for input-intensive applications (which is a basic requirement for most "productive" uses of technology). They aren't portable enough to replace a phone. They usually aren't capable enough to replace your computer. Tablets are perfect in theory... In reality, though, their usage case sits in a narrow window.
I will say, though, tablets are PERFECT for kids. Long-ish battery life. More games than you could ever play. Movies and music on the go. Your own little world. Who cares if it's a pain to manage email on one? I wish I had a Nexus 7 when I was ten years old. That would have rocked.
Segways were a terrible invention... And this is a terrible segway.
I like movies - moreso than I think most people realize. (I did major in film for a bit.) I'm working on a bucket list of movies I need to watch. If you have suggestions for this list, let me know:
Speaking of movies - I wish Hollywood didn't use established actors for every big-production they make. I don't like going to see newest Tom Cruise movie where Tom Cruise plays the character you'll later refer to as "Tom Cruise's character". You never learned the character's name because it wasn't important. It was Tom Cruise. That's just not the way stories should be told. I wish actors and characters were married more heavily. Big name celebrities shouldn't be a thing. If you star in Guardians of the Galaxy, you shouldn't also be the guy in Jurassic World 10 months and 11 days later... even if I love Chris Pratt just as much as everyone else.
The following contains "The Girl with the Dragon Tattoo" spoilers. Fair warning.
The Girl with the Dragon Tattoo introduced Rooney Mara as Lisbeth Salander. She absolutely dominated the screen. I bought into her character 100%, because her performance was great and also it wasn't marred by 4 other roles I recognized her from. She was new. She was fresh. I believed her character.
In that same movie, however, we see a great example of what not to do. We follow around the protagonist (played by Daniel Craig) while he investigates this murder than happened a long time ago. During this investigation, we are introduced to a whole host of no-name side characters... and Stellan Skarsgård. Immediately I thought to myself "Oh, well, he did it. He's the famous guy."
I was right.
He was obviously the bad guy because he was the only celebrity (other than the protagonist) that I recognized immediately. For a mystery/thriller, that's a pretty big misstep to make. Imagine if Stellan Skasgård's character (see, I never learned his name) was played by a nobody? Then each person you met had an equal chance of being the murderer. Giving a character to a well-established actor immediately makes you aware that that character is important... which can be a good thing, but is usually better accomplished naturally through plot development.
Besides, admit you want more of this from your movies: 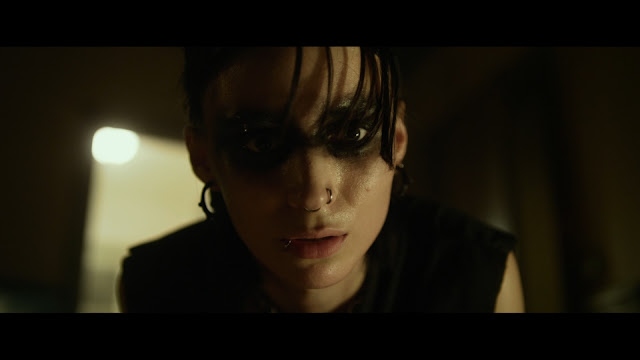 That picture is one of my almost 400 movie-themed desktop wallpapers. I'm really proud of my curation with those.
Related to my coming Top 5 - a 4k monitor, a good digital microphone, a DSLR...
Top 5: Googley purchases I'd love to justify
5. The Huawei watch/the Moto 360 v2... tough call4. The Toshiba Chromebook 33. The Nexus 9 tablet2. The NVIDIA Shield console1. The next Nexus (this one is "above the line")
Quote:
"QA Engineer walks into a bar. Orders a beer. Orders 0 beers. Orders 999999999 beers. Orders a lizard. Orders -1 beers. Orders a sfdeljknesv."
- @sempf -