Motto: I've got so much to tell you!
I have a lot to talk about. First I'm going to say - if you noticed the new favicon, I'm impressed. If you don't see it, you will eventually. If you don't know what that is - it's the little icon next to the website name up there. ↑
It's really small - but it's this:
I'd like to make a better version of that sometime... but that's good for the foreseeable future.
Also at the top of this page - a couple of sections: Projects & Videos. Those are a little more full. I plan on putting some more work on the Projects section soon.
August's 30 Day Challenge was an ambitious one. My goal was to, each day:

The results:
I maybe did more running, pushups, pullups, and eating in than usual... but not by much. I think my eyes were bigger than my mouth with that one. I'm going to pitch myself a nice slow one over the center of the plate for this month. I mixed metaphors there, but that's okay.
September's 30 Day Challenge: study 1 hour a day.
The idea is to start getting ready for graduate school; but it could be anything, really. I've been doing Udacity coursework for the past few nights. Building webpages that contain pictures of cats that you click on.
Udacity has been a really fun way to prep for grad school. Following along with the "JavaScript Design Patterns" course I've built a more and more robust version of the "Kitty Clicker" page. 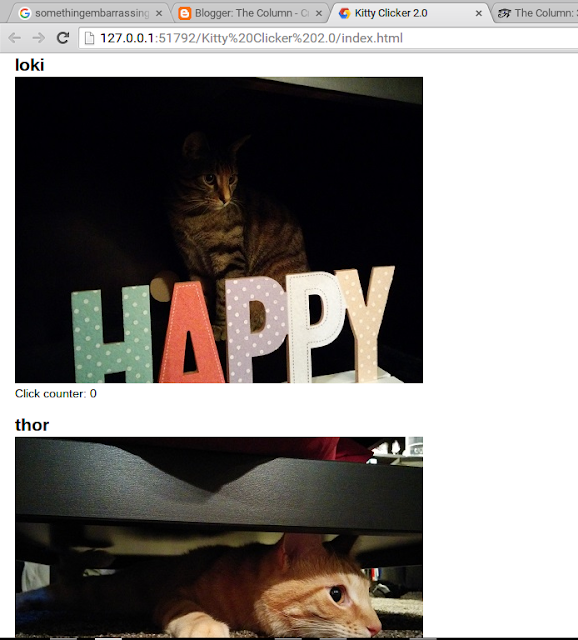 It's one of the most sophisticated things on the web. I'm pretty sure.
The new "Google" was a much bigger deal than I expected. I thought it was cool and all, but... I saw it on the local news. That's weird.
The second generation of Android Wear watches is coming out shortly. This includes the first few watches that are objectively better than the Moto 360 on my wrist right now. I don't think I'll get anything new until this one breaks or the battery doesn't last from 7am to 10pm, whichever comes first.
In 7 days, Apple will announce the next batch of iPhones. I'm not 100% sure what they are going to be called. Most places you look will say "iPhone 6s"; but I'm not solid on Apple selling anything with such a stupid name as "iPhone 6s plus". Either way, they are supposed to be not all that much better than the iPhone 6... but that's fine. No phone has been compelling to me since the iPhone 6 came out.
On that same note - Google's Nexus & Android Marshmallow launch is likely going to be September 29th. I sincerely hope it's what I hope it will be. My 2013 Nexus 5 is getting long in the tooth.
Top 5: Udacity Course I've Done So Far
5. Website Performance Optimization4. Intro to HTML & CSS3. JavaScript Basics (you're about to notice a trend)2. Object-Oriented JavaScript1. JavaScript Design Patterns, where I built Kitty Clicker Premium.
Quote:
"#POUNDSIGNFOREVER"
- Ed Hill -