Motto: I found a homogeneous mixture composed of only one phase
Figured it out.
I wrote a 2385 word Column last week about notetaking software and how it sucks. Everything I said was valid and true, but I figured it out.
I am going back to grad school (hopefully in 12 months) to study Computer Science. My degree was in Electrical Engineering, which is tangentially related to Computer Science, but is not Computer Science. I have some ground to make up before I have hopes to succeed in a masters-level computer science program. So I've been taking classes and doing independent research online.
During these classes/research I've been taking handwritten notes. After writing my last Column, I decided to experiment with OneNote as my main notetaking platform. Long story short:

Clearly, electronic notes aren't "faster" given my style of notetaking... and, as I mentioned in the last Column, physically writing notes has been shown to translate to better retention of the information. That's two bonuses for physical notes.
But what about the digital, searchable archive? Well, it turns out Melissa and I bought a scanner a while back that's really good at handling just that. I've been digitizing my notebooks from college. Finished Circuits 2 and 3 since I started this Column. So it's going pretty fast. The scanner creates searchable PDFs at a rate of about 12 second per page, which is really not bad.
So now I have a .PDF that's titled "Circuits 3" that's 84 pages long, searches seem to work alright - but that's way better than I had before. From now on, I will have my notes with me anywhere there's an internet connection... also in this handy dandy notebook: 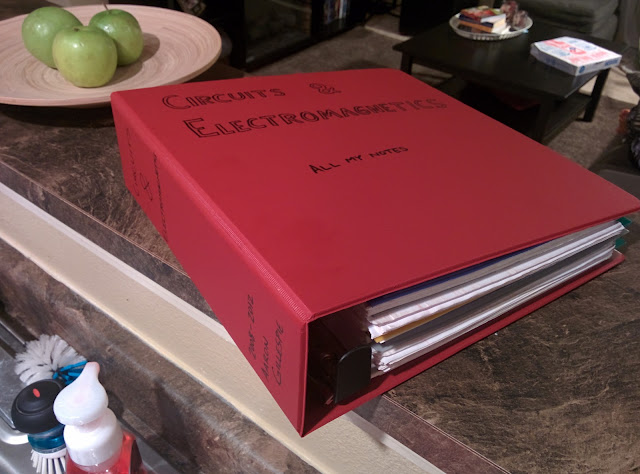 (and one other just like it)
Top 5: Benefits of My New Notetaking System
5. It makes notes as portable and as shareable as I want4. It's both local & cloud-based... and within the Google ecosystem (into which I've already fully bought)3. It supports encryption on a per-note basis (although encryption reduces the number of places I can see my notes)2. It justifies the purchase of our fancy scanner, which was admittedly a 'luxury' buy at the time1. It allows me to apply my forward-looking notetaking system retroactively (I'm half done already)
Quote:
"Seriously?"
- Melissa, after she found out I was worrying about notetaking systems again (she was very supportive after that, though) -