Motto: Writing for Me, by Me
Melissa is going back to grad school, she's taking her Mac Air & iPad with her & utilizing Microsoft OneNote. While she was setting up her notetaking environment, I started thinking about how I would architect my "idealized system for handling graduate school". Fair warning, this is a bit of an epic.

So - why bring that up at all?

The ultimate conclusion from the Moleskine entry is that you just have to decide whether you're going to use web services or a local program to accomplish tasks on a case-by-case basis. Some cases are simple: who wants a local email client anymore? Video editing is clearly something that works better locally. Notetaking, though, is kind of in an in-between state. You want access to your notes everywhere, but you'll also want the horsepower and staying power of a local client. You want your notes to be permanent - so that makes cloud solutions less appealing (two separate cloud-based notetaking platforms I've used in the past are no longer a thing - I'm very glad I never put much stock in either). You also want your notes to be available when you need them - i.e. on your phone.

There are essentially two "serious" notetaking solutions available right now: Microsoft OneNote and Evernote's namesake product. There are other ways to skin a cat, though. You could just have a folder on your computer with tons of text documents, or word documents. You could back up that folder in Dropbox or Google Drive. Google Drive has the added benefit of including a native document/spreadsheet editor that's surprisingly capable. All in all, it boils down to three real ways to do stuff... and each is imperfect. I have refined/expanded my list of "required features" in recent years. Here's an updated version of the table from Column #166: 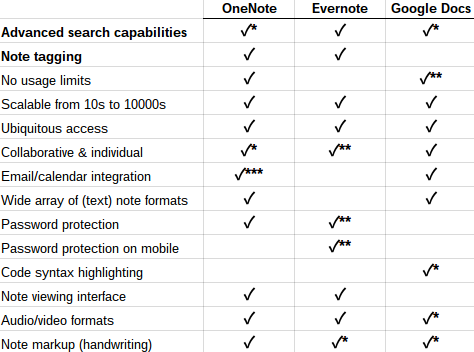 All of the listed solutions technically let you store notes locally & on the cloud, but OneNote is more locally focused, Evernote is more cloud focused, and Drive is both and neither.

Given the current state of affairs, I think the best overall product for notetaking is Microsoft OneNote... but I don't use it in my personal life because Microsoft wants you to use your OneDrive & Outlook.com email account, neither of which I have any interest in. If it were just slightly better, I'd suck it up and make a new "outlook" account, or whatever they are calling it nowadays. I use Google Drive plus LastPass to cover the password-protected usage case (which is critical for my needs).
Realistically - I'd guess the best way to take digital notes right now is to use something like the Microsoft Surface Pro 3 + OneNote... but I'm certainly not going to put that much money into the Microsoft ecosystem right now. There is a serious void in the market for a truly great system for this. Something customizable, extensible, ubiquitous, that doesn't have a stupid user interface (LOOKING AT THE ELEPHANT IN THE ROOM).

As for my specific case - I'm wanting to taken Computer Science notes. Something you may not know if you've got no experience in programming is that code editors have "syntax highlighting", which basically just changes the color of your text based of what that text means in your code. I'd like to preserve syntax highlighting into my notes. I still haven't really figured out "the" solution for this yet. I'm looking at OneNote again, but may just default back to Google Drive.
3. How do I manage time & tasks?
This question has been the subject of tons of research and thousands of books. I'm certainly not an expert, but I did technically succeed in my education and work life thus far, so I guess that gives me some credibility.
I've used versions of the "Getting Things Done" method in the past, with varying levels of success... but really I've found that most of the time I can just make lists of tasks and their associated due dates. My life hasn't been so ridiculously helplessly overwhelmed with "to-dos" that a true GTD method was warranted.

The best way to do stuff is just to do it. Focus on one task at a time. Take time between tasks to look back at your master task list to ensure you aren't missing focus on something that warrants it. I like to make physical lists for each day, and a master digital list for things in the future. That gives me the satisfaction of physically crossing things off and it pits my tasks against my calendar, which is necessary.

Whatever your preferred task & time management solution is - it needs to be paired with structure and discipline to have a chance of success. Right now, I'm breaking my own structure because I'm not disciplined enough to stick to my current 30 Day Challenge's "in bed by 10" rule.

In conclusion:
I really want to go into graduate school with a well-thought out system for doing things. Something built with the experience of high school and my undergrad degree. I don't know what platform I'm going to use for my notes, I don't even know what physical medium I'll be using. I don't want to buy into something and then switch midway through, so I'm suffering from platform anxiety. I should probably be focusing my effort more on which grad program I'll be doing & when, but that's not as fun to think about.

This is perhaps the longest Column I've written. I wish it ended with a strong "AND THIS IS HOW I'LL SOLVE ALL MY PROBLEMS" section, but it didn't end like that. It ended like this.
Top 5: Things I Wish Would Happen
5. Google would merge Chrome OS and Android4. The newly merged super OS would come with a new hybrid/convertible computer, roughly the same size as a spiral notebook3. The new hybrid/convertible computer would include a focus area on notetaking and personal productivity2. To highlight that focus, Google announces the return of Google Notebooks that checks every box in my table1. Someone would give me a back rub. This was an all-night type post. If you read it, I'm both flattered and confused.
Quote:
"Last night my friend asked to use a USB port to charge his cigarette, but I was using it to charge my book. The future is stupid."
- Random Redditor -