Motto: Get Over It, Dude

January 2014 Melissa and I did the Paleo + CrossFit 30 Day Challenge, which was a resounding success all around. January, 2015 we were going to do the same challenge, but really only the Paleo part because we already have a gym we like.

We kind of forgot about the whole thing... pretty much immediately.

January 2015 will now forever be known as the month of "The Faileo Diet". Luckily, failure is an option with these things. It was never a solid commitment. We didn't talk about it enough going in. This month will be better.

*Except for Fridays, which we will utilize as cheat days. This way we can still keep up on our currently running shows and maybe I won't lose anything I have going for me in Battlefield.

So, that's the deal.

Now, for my second and last topic, I'm going to revisit something I've written about again, and again, and again.
Friday when I was leaving work, I don't remember exactly what I was doing, but I remember it involved my Timbuk2 bag and wanting to do something with it that it was not capable of doing (not capable in the capacity I wish it were, at least). It got me thinking "how would I change this bag to make it "perfect". I got all excited by the idea to create a hypothetical "perfect" bag. I thought about it on and off all weekend.
The perfect bag. There's obviously no such thing, in general terms. There's only the perfect bag "for your needs". For my needs, unfortunately, there's still no perfect bag out there. One doesn't exist that does everything I want without the stuff I don't. One could be made, but I'm confident it hasn't been. If it had, I'd have found it by now.
My perfect bag would integrate the following in a logical and consistent way:

The picture to go out on is some doodles I made whilst trying to create my own "perfect bag": 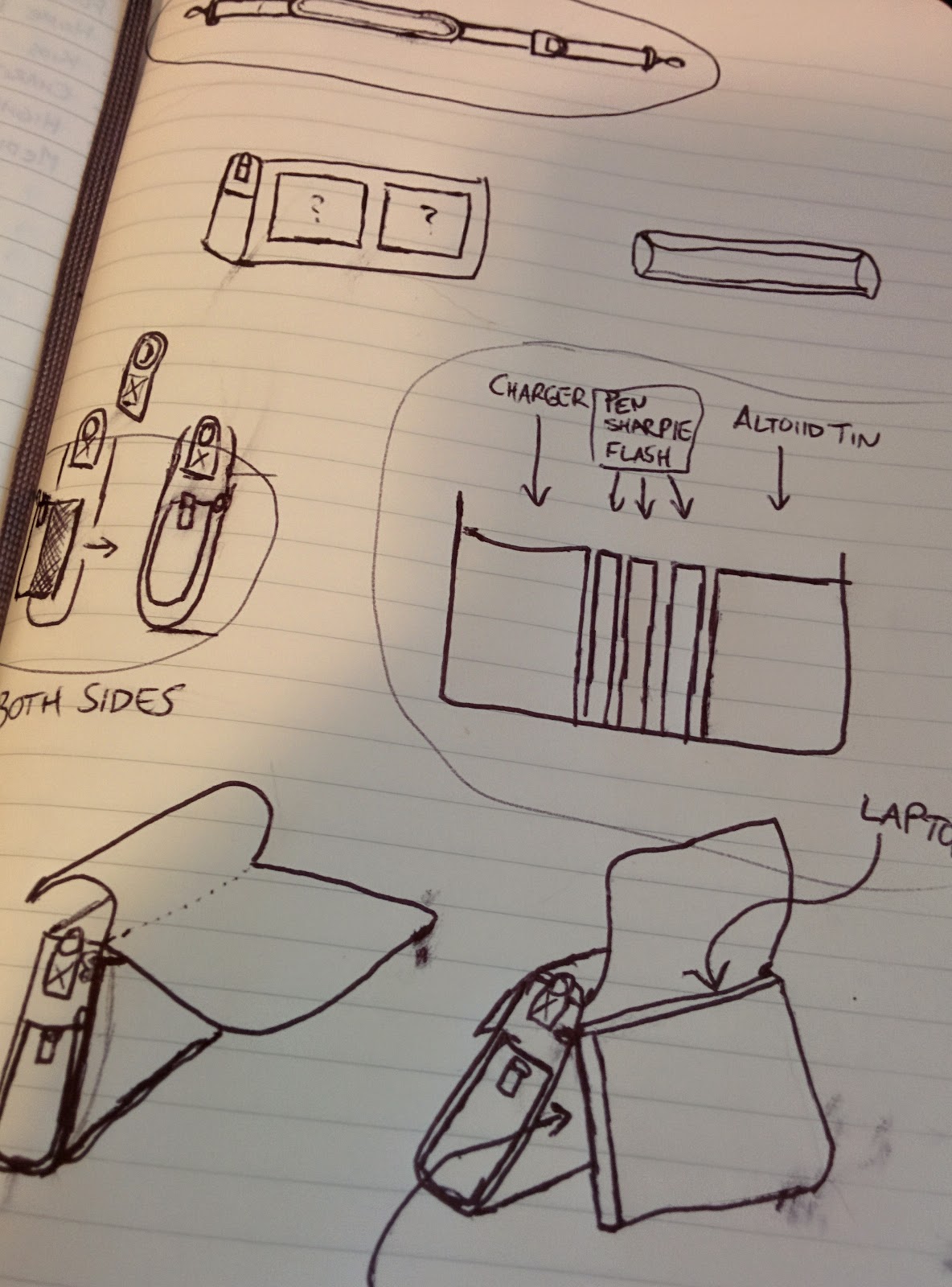 I finally ended up with something very similar to the Timbuk2 Command bag (with 5+ key differences): 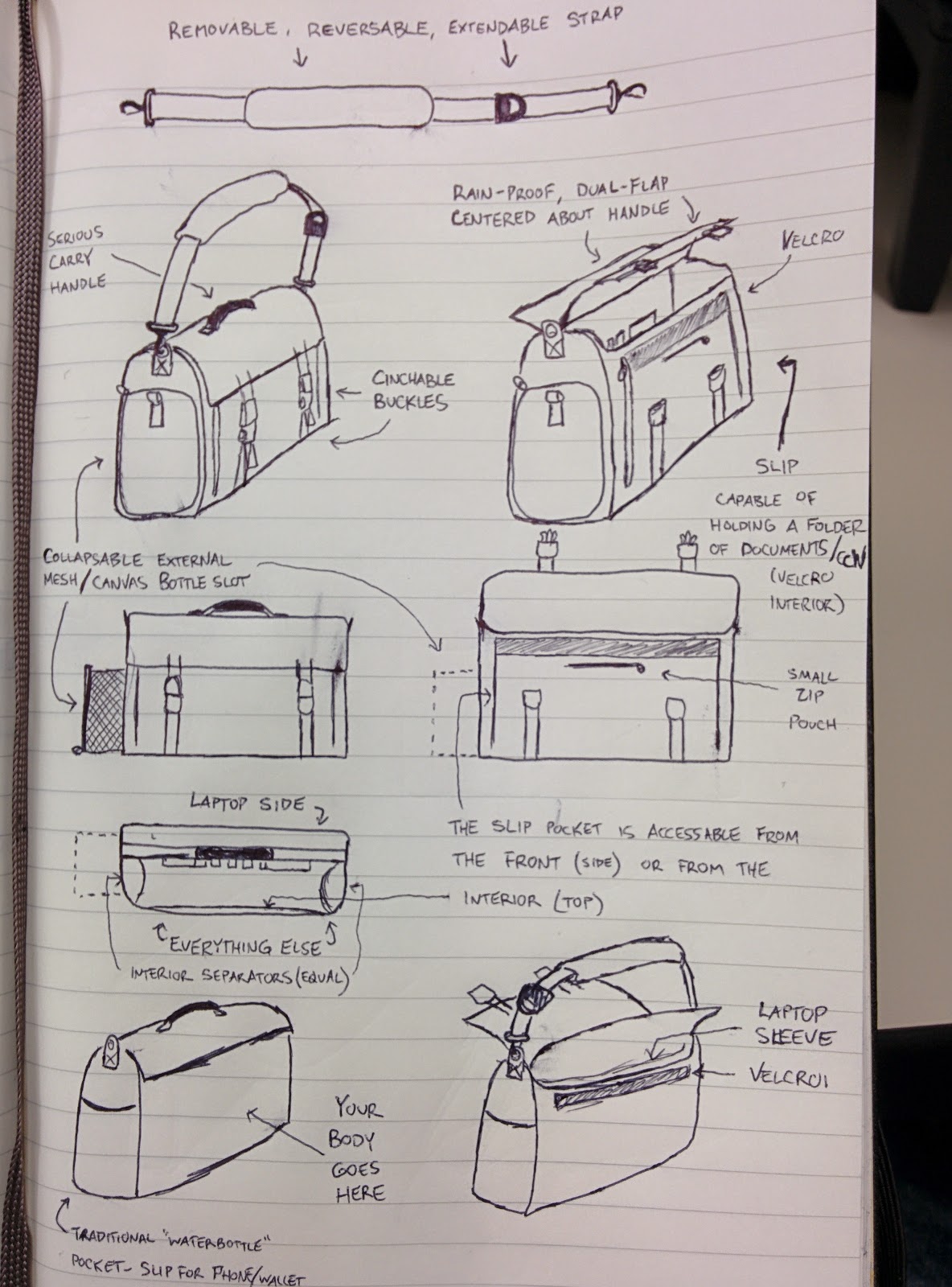 Top 5: Difference Between What I Drew and The Timbuk2 Command Messenger
5. The admin pocket moves from the front, floppy part of the bag to the more likely to be rigid back part.4. The waterbottle holder completely unzips to give you a mesh bottle holder. I also considered making this side of the bag MOLLE webbing. I'd probably do that, in retrospect. I want to be able to hold my Nalgene if I want, and have no bulk if I don't want to hold anything.3. The whole thing doesn't zip in half. This feature is awesome, provided you're flying often. If you don't fly much, it makes the added weight/complexity unnecessary.2. The "Napoleon" pocket is larger, and has an internal (top) opening in addition to the external (side) opening. Frankly, that second part is actually pretty good. Timbuk2 I'll sell you that idea for cheap. 1. I added some of the features of the 2014 Timbuk2 classic messenger. The strap style, the interior side pockets, the simplified face pocket.
Quote: “My preworkout consists of me staring into the mirror for 5 minutes insulting myself. My cool down consists of me flexing naked for 20 minutes.”- Jon -