Motto: Vegas is Paying Out Big Money to Some to Some Lucky Betters
This weekend I built a computer. Let me answer some anticipated questions: Q: Why did you need a new computer?A: This is a great question. The best, most truthful answer I can give is that I didn't need a new computer... yet. My Linux-running laptop does achieve the bare minimum functionality I needed it to. It was, however, incapable of many things - and the things it was capable of doing almost always had an asterisks next to them. It was capable of browsing the internet.* It was capable of editing video.** It was capable of watching video.*** It was capable of playing games.**** It was capable of transcoding video.***** *except for sites using flash, quicktime, or silverlight - or some other sites that would just sometimes not work without explanation. **with a video editor I never "liked" only tolerated, with many limitations. ***so long as that video was 24 or 30 frames per second with a low bitrate. ****limited to: majong tiles, solitaire, and minesweeper. *****slooooowly. It was incapable of variable bitrate video editing or playback. It was incapable of being host to a remote client. It was incapable of running Google Drive. It was incapable of being considered a "master computer" for Melissa and I to use going into the future - on account of the abnormal OS, lack of internal storage, and lack of computational throughput. Q: But I thought you loved your Linux laptop?A: I did, and in a way I still do. Every piece of software on that computer was free and legal, and it met most of my needs. Getting it to where it was was a huge effort, and it was a source of pride. Q: Aren't you trying to buy a house soon? Why did you buy a computer?A: Upon doing further research into our budgets and the true costs of buying a home, Melissa and I determined it wasn't really possible to buy a house before our current lease is up. This delays the house buying process and allows us to build capital. Long story short, "buying a house" seemed like the grown-up thing to do, when really the grown-up thing to do is probably to continue to rent until we are sure we can afford what we want. Q: Okay, so what is so great about this new computer?A: Well, first and foremost I built it. It took me over a quarter-century, but I finally built a computer from its piece parts. I did the research, made the inquiries, made the purchases, learned the process, executed on the build, and only messed up one time... when I "fixed" what I thought was a minor mistake but it later turned out it wasn't right the first way. The now fully-assembled and working machine is easily the most powerful computer I've ever used. More importantly, it's a great "master computer" for Melissa and I to use for master backups, heavy computational tasks, and media serving. It's also nice that it runs Windows 8.1 Q: Wait, what? Windows 8.1? Aren't you Mr. "Windows is awful. I hate Windows with the intensity of 100 suns!"?A: Yeah, that's me. It's truly depressing, but going back to Windows was really my best option. The way I saw it, I had 3 options: 1. Buy an iMac desktop. Pay a TON of money to get a moderately capable system. When that system starts to slow down, pay for another entirely new computer. 2. Build a computer, put Linux on it. Pay a smaller amount of money for much more capable hardware, but continue to deal with software woes, unoptimized systems, and an OS not easily navigated by anyone other than me. 3. Build a computer, put Windows on it. Deal with Windows 8. Reap all benefits. Swallow pride. Option #3 was really the only option. Windows 8 is not great. It's not terrible, either... especially since I put "classic start" on here. It looks and works almost exactly like Windows 7. Plus, I've made the conscious decision NOT to install Microsoft Office. That can be me "stick it to Microsoft" that I stand on. Q: Why not put Windows 7 on there?A: Windows 7 will have a shorter support life. Windows 8 is more efficient in terms of processor use. Plus there's still the rumor that Windows 10 might be a free upgrade for anyone running Windows 8.1, and I'd like to have that option. That is all. This is what my computer looks like: 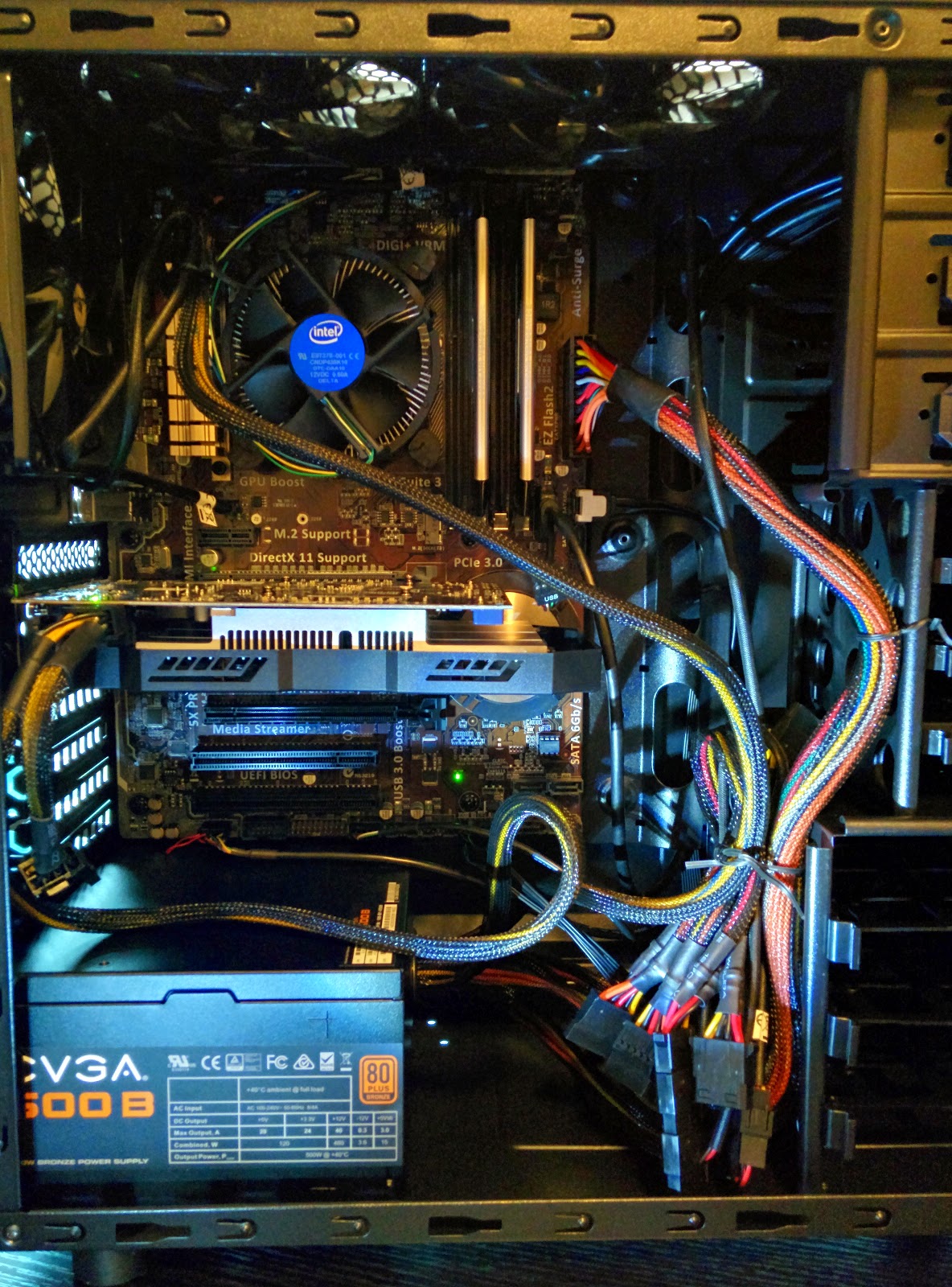 Top 5: Things I'm Excited to do with My Computer 5. Let me edit video in an editor I actively like using. 4. Let me edit that video from my Chromebook by remoting into my main PC. 3. Give me a massive, huge internal RAID storage for source video content. 2. Upgrade it in the future without buying a whole new computer. 1. Play games more complex than Freecell. Spoiler alert - I did so last night and my entire next post you can probably skip on account of that.
Quote: “WHY IS IT SO COLD IN HERE!?" - Satan -