Because I sorta work in the industry, I feel the need to say the following contains information sourced only from public news and my opinions garnered from public news. My job does not afford me overwhelming insight on the future of consumer-facing television landscape. This will all be wild speculation using made up numbers to illustrate a point I would like you, the reader, to consider your stance on. The economics of television work out like this:
Millions of customers subscribe to a basic cable package that gives them 100 channels for $50/month. Let's say that consumer XYZ watches somewhere around 10 of those channels in any given month. So, that she is wasting 85-90% of the money she's paying, right? 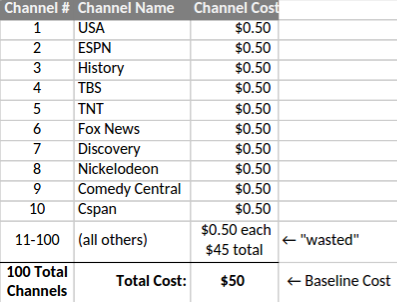 Couldn't she just choose to pay for only the channels she watches and save ~$45/month? 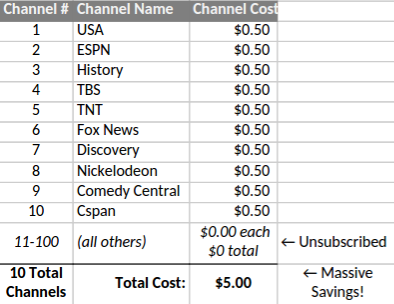 Ms. XYZ is saving $45! Huzzah!
Wrong. Wrong for the simple fact that channels are not equally "valuable". You can't just say "well, I pay $50 for 100 channels, so that's 50 cents a channel. I only want to pay $5.00 for these 10 channels I actually watch". You can't say that for a couple of reasons - 1) that's not how TV plans are offered (as of right now), and 2) that's not how TV plans WOULD work if they WERE offered that way - not all channels would cost the same.
What you'd end up with is a pricing structure based off per-channel demand. Channels like ESPN that receive MASSIVE viewership could afford to charge way above and beyond their 50 cents. You'd end up paying something closer to $15-$20/month, just for the ESPN network, if not more. They can afford to do that because there's millions and millions of people that would gladly pay that amount to get their 24/7 sports fix. Less popular channels couldn't get away with that, so you'd see Fox News for $10/month, Comedy Central for $5/month, and Discovery come out for $2.50/month. The pricing structure would range from ~$20/month down to around $0.10/month for some of the lesser-watched channels, like Cspan. So, let's look at consumer XYZ's cable bill: 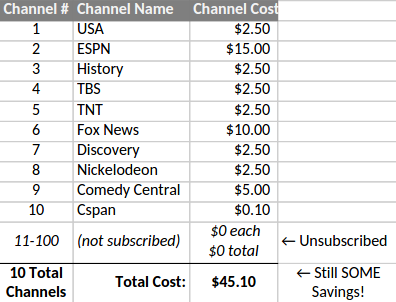 Ms. XYZ is still saving $5! Huzzah!
Only, that's not true either. Let's take a closer look at a pretend world where the TV model is "pay for only what you want to watch & watch everything you pay for". Channels like Cspan can afford to run off 10 cents per subscriber because of the vast number of subscribers that are forced (for lack of a better term) to pay for them. If we were to break out stations individually, and Cspan was no longer getting subsidized by the millions and millions of 10 cent contributions by people who don't actually watch it - it would have to charge those people who DO elect to pay significantly more to keep itself afloat. Let's say that only 1 out of every 100 people decide they like Cspan enough to pay for it. Well, in order to keep income the same, your price just went from $0.10/month to $10/month. Cspan just became a specialty. If you really want it, you gotta pay for it. The number of consumers is the supply-side of this equation.
So let's revisit example consumer XYZ. She still only watches 10 channels/month, but now it's 9 "normal" channels and 1 "specialty" channel: 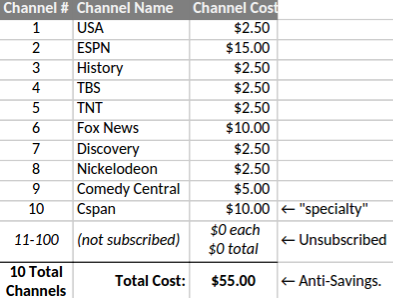 Ms. XYZ is now LOSING $5/month. If you were to actually pay for all 100 channels, your bill would be astronomical, in the neighborhood of $400/month.
So. There's one side of the argument. You're paying for the 10 channels you watch and getting the other 90 essentially for free. It's the side of the argument that the cable providers are making, and it's actually a pretty valid... if you assume that people would continue watching every channel they currently watch if they were forced to pay for them individually.
Here's the flip side of that argument:
You're no longer paying for the 10 channels you watch, and getting 90 channels for free. You're paying for every single channel. Mrs. XYZ watches the History channel, but only really one show on History. She decides that one show alone isn't worth $2.50/month for her. She is no longer a History subscriber. The same goes for TBS, Discovery, USA, TNT, and she usually goes out to watch sports anyway, so she no longer pays for ESPN.
Here's XYZ's lineup now: 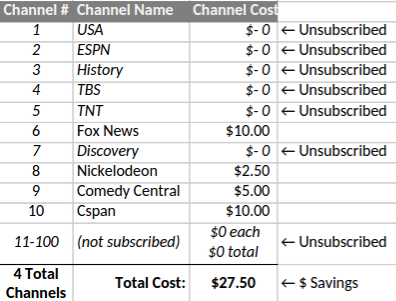 Mrs. XYZ is now saving $22.50/month, but she has now 5 or 6 less shows that she's no longer watching. She's missing out! Woe is her, right? Is that right, though?
Television can be a great thing. There's nothing quite like kicking back at the end of a long day and turning on cartoons on Fox. But television can also be a terrible thing. 100's and 1000's of channels enables habits of over-consumption. There's literally always something on. It's a contributing factor to a culture that lives a sedentary lifestyle, doesn't read, doesn't do much of anything beyond passively consume bland entertainment.
If we were given a more traditional supply & demand style television system, TV would consumption become much more intention. Competition would cut out the crap. Television would lose some of their specialty channels. Some of them would just go away, some of them would find other means to deliver their content. Some people would be out of a job. There would be less things on TV that we'd watch "just because they are on". The television industry as a whole might take a slight hit, but that hit would purely be a reflection of a more efficient economic model. Most importantly, at a macroscopic level, I believe we would all live slightly better lives. That's my opinion. I could be wrong. I'm not an economist. I'm not a sociologist (I about wrote "socialist" here on accident). I just a dude who thinks about things sometimes.

Top 5: Side Benefits of the A La Carte Model 5. All those stations with only one good show would go under, but the demand for that one good show could potentially bring it into one of the stations you DO watch. All the sudden, that one good show that everyone likes on the network nobody watches could replace that one show that nobody likes on the network everyone watches. 4. Due to the above, what WAS on television would take a fairly dramatic upswing in quality. 3. The lack of "I only watch it because it's on"-type shows would cause people to watch less TV overall. I think few people would argue that the average American watching less TV would be a bad thing. 2. Paying for individual channels would likely open up additional options. TV on the internet would become much more commonplace. 1. You pay for what you get, you get what you pay for. The economic system works at its most fundamental level. That's just satisfying on some deep level.
Quote: “I Find Television Very Educating. Every Time Somebody Turns on the Set, I Go into the Other Room and Read a Book" - Groucho Marx -