The following is a rant about "Part" movies, and a ranting review of "The Hobbit: The Battle of the Five Armies". It will contain spoilers for that movie. I hate "part" movies. They are money grabs that rob the movie-goer of their cash and the chance to experience a story as it was meant to be told. Here's a little background to preface this review: 1. I'm only a casual fan of the whole "J.R.R. Tolkien's Middle Earth" franchise. I've seen all the movies, but read none of the books. My wife is much more dedicated and her opinion deserves to be listened to more than my own... but I'm only going to write about mine. 2. I have not done any research beyond watching the films - this includes reading about the lingering questions I have about the film and/or reading previews, reviews, or otherwise anyone else's opinions on it.
First off, having the word "The" three times in your movie's title is weird. Is it about "the hobbit", "the battle", or "the five armies"? ...and don't say "all of that", because I've seen it. It's not really much about ANY of that. It's about the main dwarf leader dude. He's pretty much the only character with any depth. I learned in film school about flat characters. They exist as a supplement to round characters. Round characters are usually the main characters of any story, they undergo some sort of change during the course of the narrative. The Hobbit: The Battle of the Five Armies only has one "round" character, and it's not Bilbo Baggins. It's the leader of the dwarves. So calling the movie "The Hobbit" is kind of misleading. It would be like calling Harry Potter movie "Ron Weasley: and the Story About Someone Else". So there's criticisms 1 & 2. I walked into the movie and had to ask Melissa, "Hey, what's the point of all this again? I know they are on a quest for something, but what was that something?" It's probably not a good thing that I had to ask that. Sure, it falls back on me somewhat as an audience member to come into the story prepared, but I think it speaks to the lack of a consistent and cohesive story in the two movies leading up to the climax. They were muddled with side plots that got tons of screen time, because how else are you going to make a ~300 book into 8 hours of movie. So the movie starts with Smaug tearing up the water town. Then, within the first 10 or 15 minutes of the film, he dies. I have a huge, gigantic, big big problem with this - and it makes me like the second movie in the trilogy less: WHY WAS SMAUG NOT KILLED IN "THE DESOLATION OF SMAUG". The second movie should be called "The Hobbit: The Final Part of the Journey to Smaug and then Meeting Him and Seeing How Scary He Is and Then Nothing", because he's most CERTAINLY NOT Desolated in that movie. He's made up to be a big scary monster. Then he flies off to terrorize water town. Then the screen goes black. Back in the day when I saw The Desolation of Smaug I thought to myself "oh, actually killing him must be a large part of the 3rd movie." But it's not. He's "desolated" in the first 15 minutes of the 3rd movie. Why oh WHY would they choose to put the break between the two movies right there? It's a HORRIBLE place to end the second movie and it's a horrible start to the 3rd. Here's why: They needed people to watch Part 3... and killing Smaug pretty much seems like it wraps up the whole story, doesn't it? Even in retrospect, it seems like it wraps up the whole story. What happens afterwards has nothing to do with the Hobbit. It really feels more like a sequel that decides to focus on a different character (which, by the way, I'd be fine with). 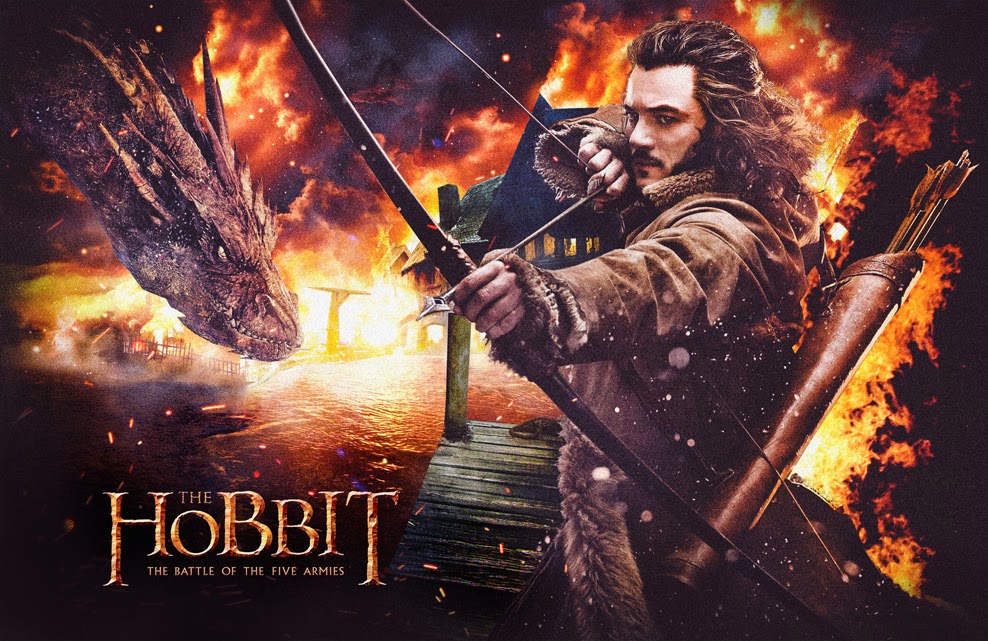 That picture is a horribly misleading advert.
So, after that 15 minutes, the movie shifts tone and pacing. It basically becomes a whole different story. Smaug had a gigantic pile of treasure, some of which was not stolen from the dwarves, but instead the elves, or other people. So who gets that treasure? The head dwarf guy basically decides he deserves it all (because he has "dragon sickness", a thing that apparently makes you corrupt and have a really cool voice). That question sparks the battle of the five armies. The five armies, by the way, include the dwarves, mankind, the elves, the orcs, and... well... the other orcs? I guess? So it's 5 armies, 4 factions. That's confusing. I am a large fan of Evangeline Lily. She's beautiful. She's actually pretty funny in real life, She was a major player in LOST, which I very much liked. She's going to have a big role in the Marvel Cinematic Universe in about 9 months. I liked her character in this trilogy. BUT her character either "didn't exist" or "was not a big part of" the Hobbit book (according to Melissa). So, that whole thing was made up by Hollywood to accomplish a few things: A) Give the movie ONE female character. B) Kill time, because how else are you going to make a ~300 book into 8 hours of movie. C) Insert a Romeo & Juliet style love plot into a movie that has nothing to do with romantic love. That's annoying. Speaking of stupid side stories and characters with worthless and unnecessary amounts of screen time... the Mayor/King/Whatever of Water Town's assistant. The guy with the unibrow. We get it, he's a terrible person, has zero redeeming qualities, and is all-around the opposite of the "virtuous man" that most the other characters in the movie are. He does NOT need that much screen time. I'm not sure if they were going for comic relief with that or what, but it just came across as irritating. He's the Jar Jar Binks of the movie. That Jar Jar Binks comparison is actually really good, now that I'm thinking about it. There were apparently several other characters from "The Lord of the Rings" whose appearance in "The Hobbit" was done only in the movie. Legolas, for example. I think I heard that the whole scene with Sauron was not from the book, either. So, those are my problems with that movie in particular. Before I wrap this up I just want to point out one thing. The whole "The Hobbit" trilogy (a.k.a. single book) could be made into one, very very enjoyable movie. It could NOT, however, be done by just concatenating all 3 movies into one 8 hour, 31 minute movie. You would have to cut, slice, and dice all of the movies. Take out the cruft, the crap, the garbage plotlines and 2nd and 3rd "establishing shots" for each scene change. Tighten up the super long pauses between actual dialog. Remove the love story almost entirely. Remove Mr. Unibrow entirely. Take out the long soft-open they did in the first Hobbit movie and the soft close they did at the conclusion of the trilogy. It would be a lot of work. But I think it's possible. It's too bad that it wasn't MADE THAT WAY. Hollywood was stolen the opportunity to see one, truly good movie from us, the consumers. They stole that from us WHILE they were stealing our money for the second and third tickets we had to buy. "Part" movies are terrible. Money taking presidency over story is sad. I can't wait for The Avengers: Infinity War Part 1.

Top 5: Redeeming Qualities of the Movie 5. I like Martin Freeman. His performance was very enjoyable. 4. The visuals in the movie were quite impressive. 3. I like Evangeline Lily in everything she's in. 2. I like that the movie was done in 60 Frames Per Second. I wish all movies were done this way. It makes motion so so much better. 1. Smaug was cool (for the 15 minutes of the movie he was in).

Quote: "I don't think I'll probably cry at the end of this movie like I did at the end of the Lord of the Rings." - Melissa, while going into the movie. She was very right. -