Motto: Google Fit, Not Quite Fit for Duty (HEADLINES, SON)

This entire update is about Google fit. If you don't care, I suggest you skip it. 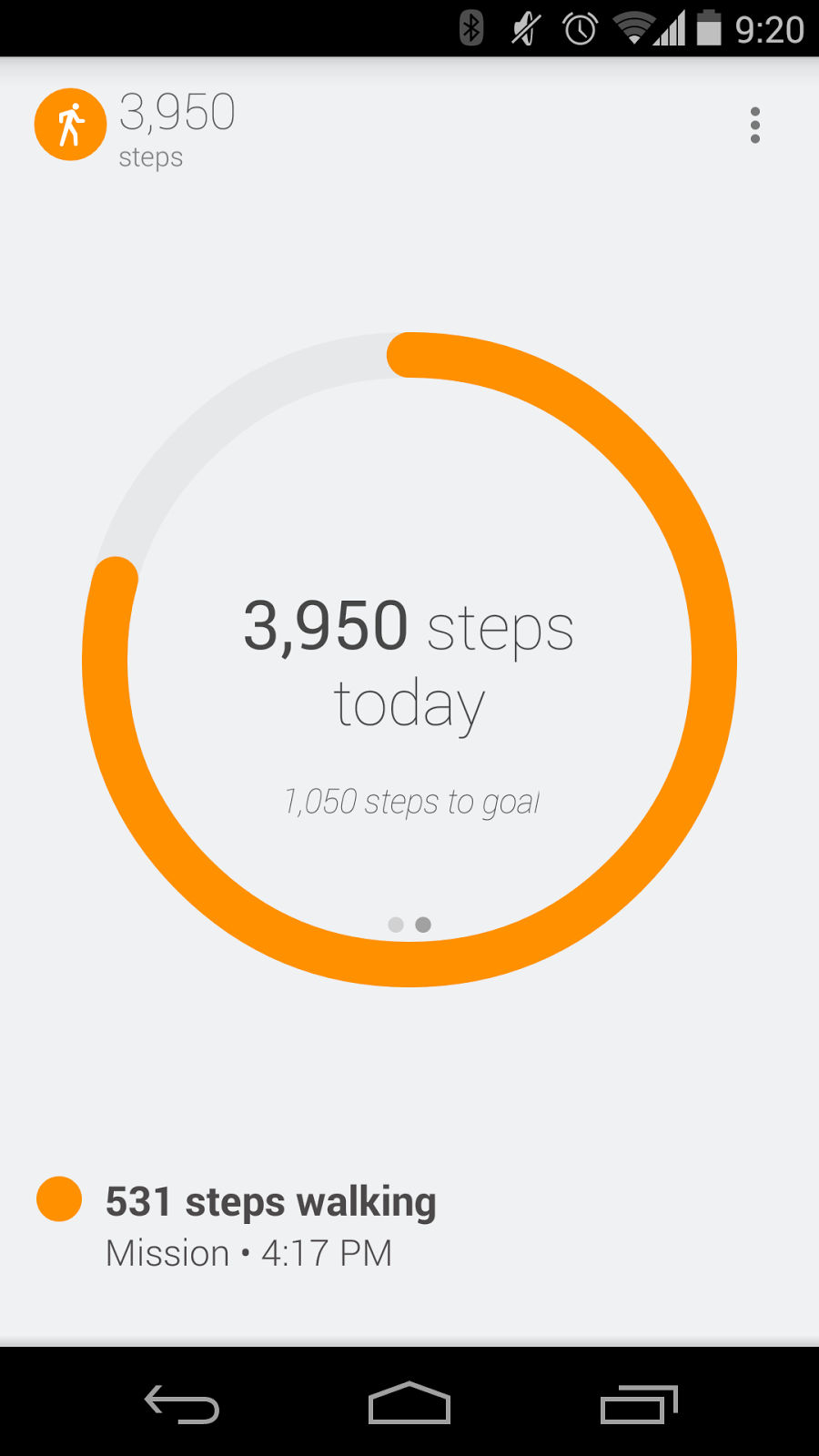 I love Google Fit. It sits in the crux of things I really like. Seriously, if you threw some sort of Marvel superhero in there somehow I might explode. It shows amazing potential, but I think Google is doing a horrible job with the release.

Google Fit is an aggregation platform/app for all of the health & fitness data from the various diet, workout, sleep apps available on the Play Store. It will shine when it aggregates all of that data.

Right now, this is all you can get to integrate with Google Fit:

That's it... I think.
I say "I think" because there is NO WAY TO SEARCH FOR APPS INTEGRATED WITH GOOGLE FIT. They have NOT aggregated them in the Google Fit app. They have NOT aggregated them in the Google Play store. There is NO WAY to know what apps are available to use for data gathering. I found those four apps after looking online, looking at the developer site, and searching the Play Store for half an hour. I'm not happy about that. The killer app of Google Fit will be the integration... so why are you making it so difficult to find apps that play nicely? Even if there really is only 4 (which I doubt), SHOW ME THOSE FOUR! If I search for "Google Fit" on the Play Store, there are zero ZERO ZERO apps in the first 50 apps that integrate with Google Fit. 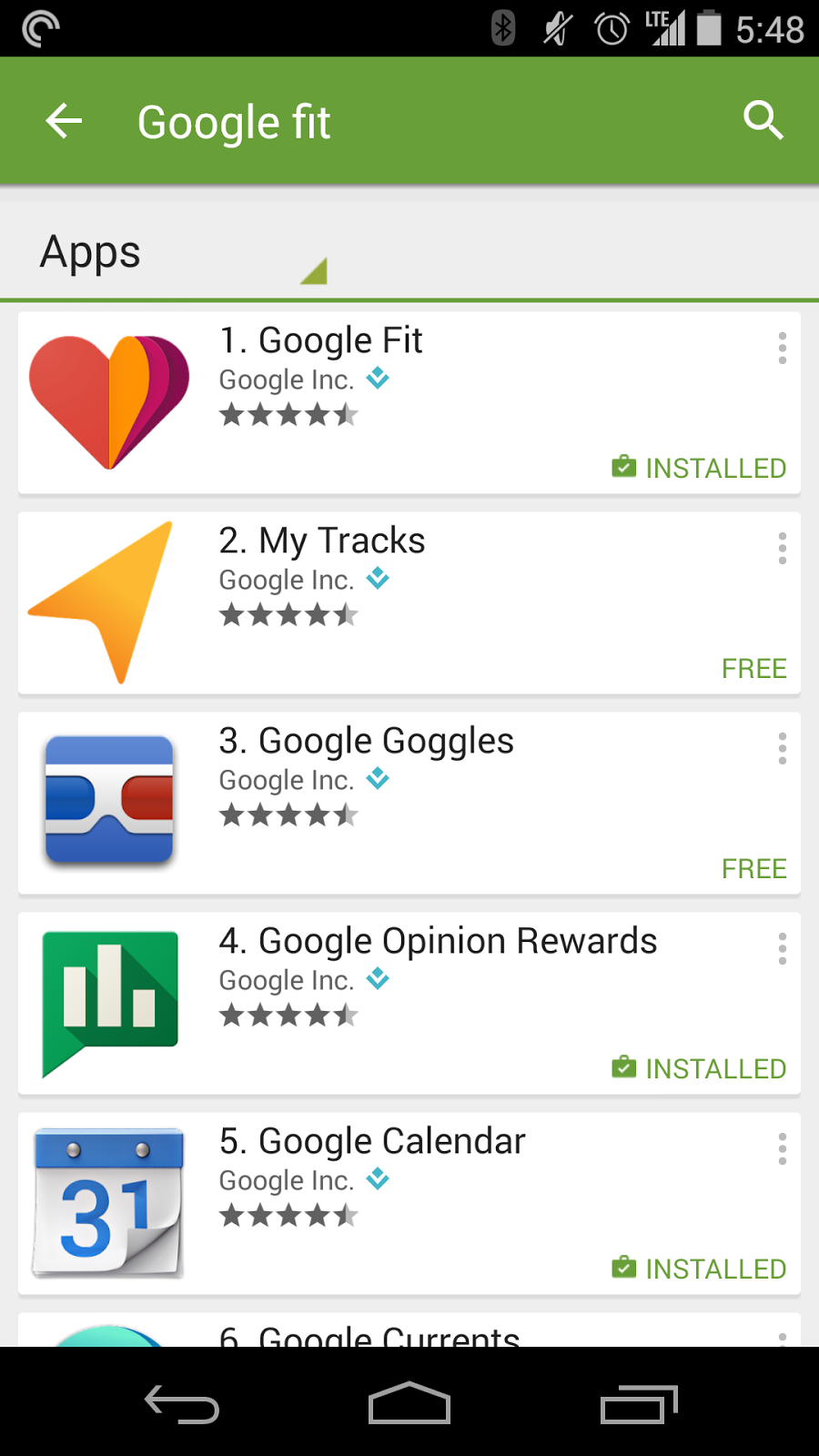 Seriously.
You're giving anyone who's not a fanatic Googler or a fanatic quantified-self advocate reason to look at the app, decide it's only a glorified pedometer app, and dismiss it.
Also - the only apps I can find so far are 4 runnings apps. Where's the diet trackers? Where's the sleep trackers? Where's the weightlifting, interval training, and/or anything other than "steady state cardio" apps? What about some sort of happiness/mood/mental well being app? What about glucose, blood pressure, or other type trackers?
The app itself also has room for some obvious improvements. What's the deal with the blue graphs here? 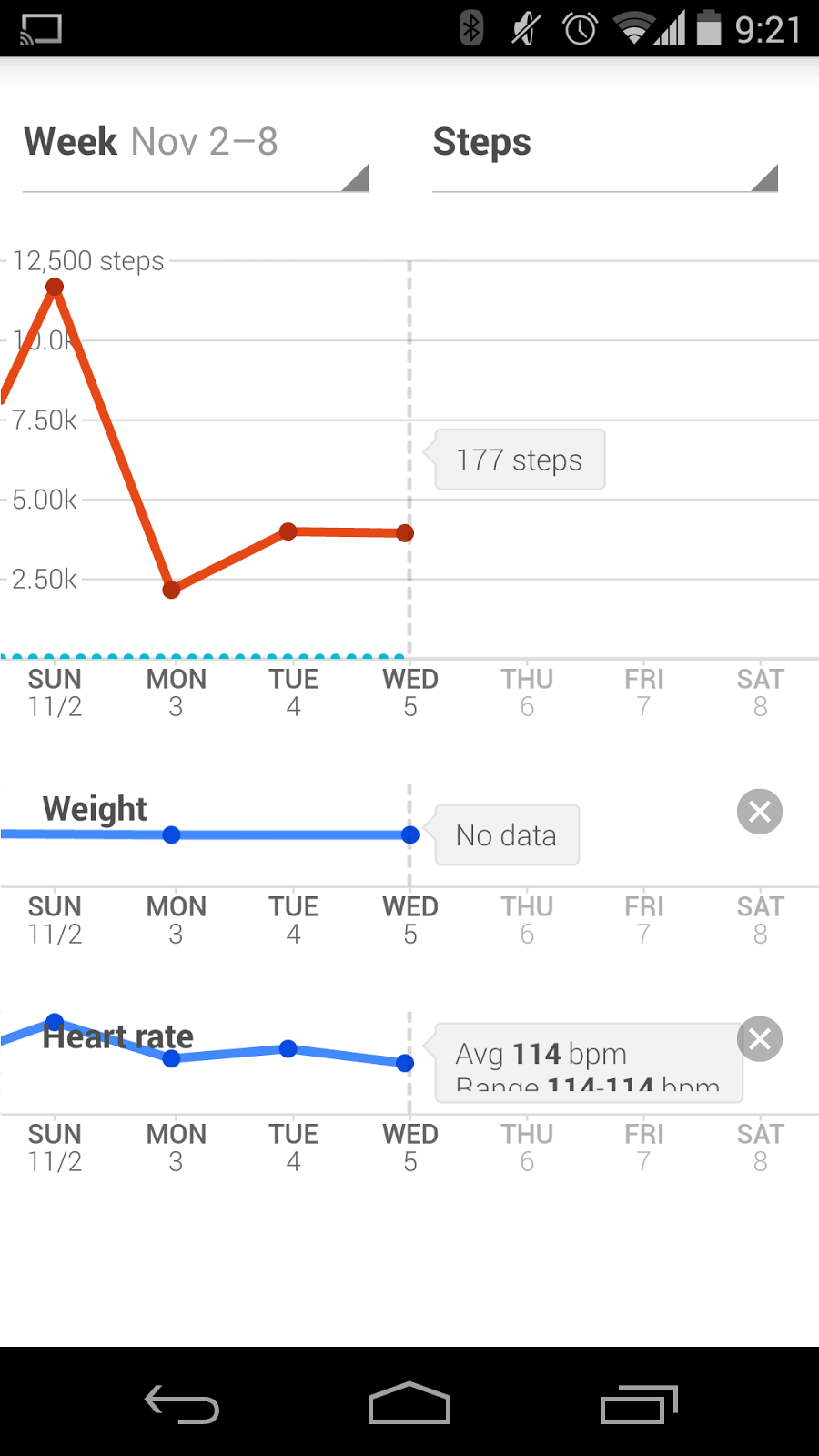 Those blue graphs are so short. The grey box showing me the average and range for each day is so short, it can't even display the text contained therein. There is no semblance of data resolution here. Why have a graph if you can't get information out of it?
Also, here's a specific complaint. That grey box says my average heart rate was 114 beats per minute. If that were true, I'd be in a serious pickle. My resting heart rate is somewhere around 65 in actuality. My watch, which measures my heart rate every 5 minutes, does NOT report that data into Google Fit. Instead, it only reports instances where I manually instigate a heart rate reading... which I generally only think to do when my heart rate is elevated for some reason.
Google, I see SO MUCH POTENTIAL HERE ----- but I am disappoint.
On the plus side - integration with the "LifeSum" dietary tracker is coming... and that app is beautiful. Seriously. Look at this app:

Seriously. That's gorgeous.
Top 5: Things that Need to Happen to Achieve Google Fit Zen
5. A greater number of apps to choose from for integration.4. A greater variety of apps to choose from for integration. Heart rate. Diet. Weightlifting. Really ANY metric beyond some sort of step-based thing.3. Integration with fitness devices. Even my Android Wear watch doesn't really do what I want.2. Better data views.1. A way to FIND all of these things. Why are they hiding this stuff?!? It's madness!?
Quote: “Everything!”- the Google Fit app's "what's new" section upon its release -