Being a critic is not one of my skills. However, I must be at least partially capable of writing critically because that statement itself was a criticism. Here goes. Agents of S.H.I.E.L.D. has got my attention. Season two has started strong, which you couldn't say about last season. I care about the characters. I'm interested in the story. I don't want to miss a minute of the show. Each week I get to see a little action. Each week a little character development. Each week I'm surprised. This week's episode was really good, but what surprised me most happen in the last 6 seconds before whatever dumb show that follows SHIELD came on - "that's what happened in this week's episode. Here's a little preview of next week's episode, so make sure you catch that andohbythewaywewillhavethefirstpreviewofAgeofUltron". I annoyed my wife heavily by saying "WHOA" with a bit more volume than intended. Then I proceeded to fantisize all night about what I'd get to see in a week. Little did I know I wasn't going to have to wait an entire week. I don't know the story, but apparently somebody got a hold of a low-resolution, bootlegged copy of the trailer. It started making the rounds on the internet and Marvel decided they'd rather people's first experience with the trailer be in glorious 1080p, so they went ahead and dumped the official trailer onto the web. Then they tweeted about some Hydra agents uploading the bootlegged trailer. Here's the official trailer:


YES. I'm going to come at this like I'm talking to a casual observer of the MCU (a.k.a. - not an enthusiast/nerd/whatever). What is this trailer all about? In this trailer you meet for the first time: Ultron, Quiksilver, and the Scarlet Witch. Ultron is the bad guy. He's a robot, but not really just A robot, he's ANY robot. He is software. An artificial intelligence that can replicate itself or move itself from host robot to host robot. He is built by Tony Stark (who decided to quit being a superhero at the end of Iron Man 3) to be an augment to/replacement of the Avengers in their quest to protect the earth. Ultron becomes self-aware and decides that the greatest threat to the earth is humankind. He's a big problem. Quiksilver is fast. He's the same fast guy from X-Men: Days of Future Past, just played by a different actor with a different context. He's probably going to be a bad guy for at least a portion of this movie. Scarlet Witch is Quiksilver's twin sister. She can do lots of things that all fairly resemble magic. She will also be a bad guy for a bit. You also get to see the Tony Stark's Hulkbuster armor. It's basically an Iron Man suit for Iron Man. It was designed to take down the Hulk should he become a problem. This trailer shows that EITHER the Hulk becomes a problem OR that Ultron takes over Iron Man's armor. Hard to tell. Either way it will be awesome. Thor, Captain America, Black Widow, and Hawkeye are all involved, but I'm not sure in what capacity. We're apparently supposed to get a bit of Black Widow's backstory, see more of Hawkeye actually being a superhero, and apparently more of Thor shirtless.

The allusion to Pinocchio they used is awesome. A puppet getting off his strings is a great metaphor for a robot built for one purpose deciding instead to thinking for itself. Some genius put this picture together: 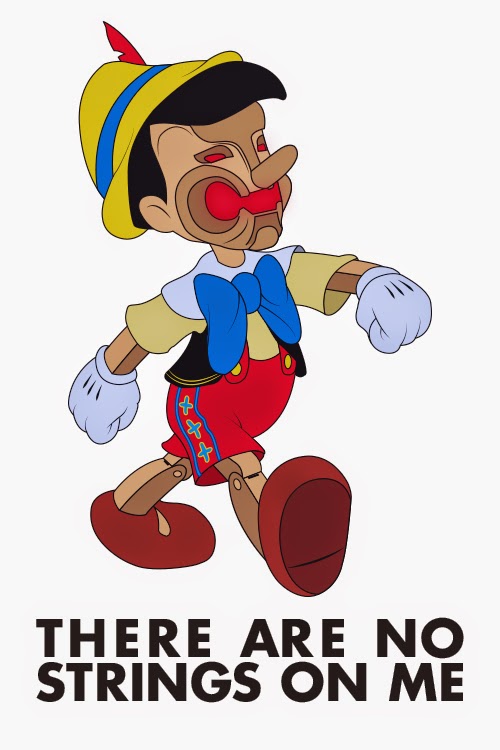 I love the trailer. I can't wait for this movie.
Top 5: My Favorite Parts of the Trailer
5. The mangled robot that awkwardly walks out, like it were a marionette. 4. The random shot of ballerinas, cause why not?3. The shot with all of hte robots climbing out of the water.2. The delivery of "but now I'm free, there are no strings on me".1. The Hulk throwing the car, then immediately punching Iron Man through the car.
Quote: “You know you're an adult when you can be right without proving the other person wrong”- some random redditor, it has nothing to do with the trailer, I just liked the quote -