On Saturday Melissa and I had one of those crazy productive days. The kind of day that you only have once every 2 months. The kind where you sit back at the end of the day and think "man, if I just did this once a week - I'd be so ahead of everything in life". On Saturday we: Drove around the area we'd like to live next year looking at neighborhoods and houses in our potential price range. Went to car dealerships to look at SUVs - we've had "buy a car" on the whiteboard for a couple of months now. Found an SUV we both really liked. Bought it. More on this later. Returned some improperly sized frames to IKEA. Looked around there for a bit. Sunday was pretty darn good too. On Sunday we: Went to an open house, to get an idea of what we'd like for a future home. Checked out a couple of other houses around the neighborhood. Played our last sand volleyball game of the year. Our team only had 3, but we still managed to win. Watched the movie Gone Girl. Thanks to that movie for helping us sleep that night. I filmed our last volleyball game. Here's how it ended: The play in that video does not accurately reflect the entire game... but it was awesome (for me). So - we bought an SUV. For the past year, Melissa and I have been sharing a vehicle. We've known for a while we were interested in getting a second vehicle, one with different physical properties than the small hybrid we already had. With that, we elected to get an SUV. It's bigger. It can haul stuff. It has many uses that the hybrid can't begin to accomplish. Without further ado, allow me to introduce the MK II: That picture is more about the tree than the car, I admit. It's still cool.
That is the MK II. I am retroactively renaming the Sonata from "Mark 4" to "MK I". Instead of keeping track of the number of cars I've driven, I'll keep track of the number of cars I've bought. Also, when writing the name I'll use "MK" instead of "Mark". The MK II is nice. It's fancy schmancey. It's got all sorts of bells and whistles. Here's a pictorial review of the vehicles I've driven:

In order - the Weezer Wagon, The Man Car, My Mom's Car, the MK I, and the MK II.
Here's the current Gillespie fleet: 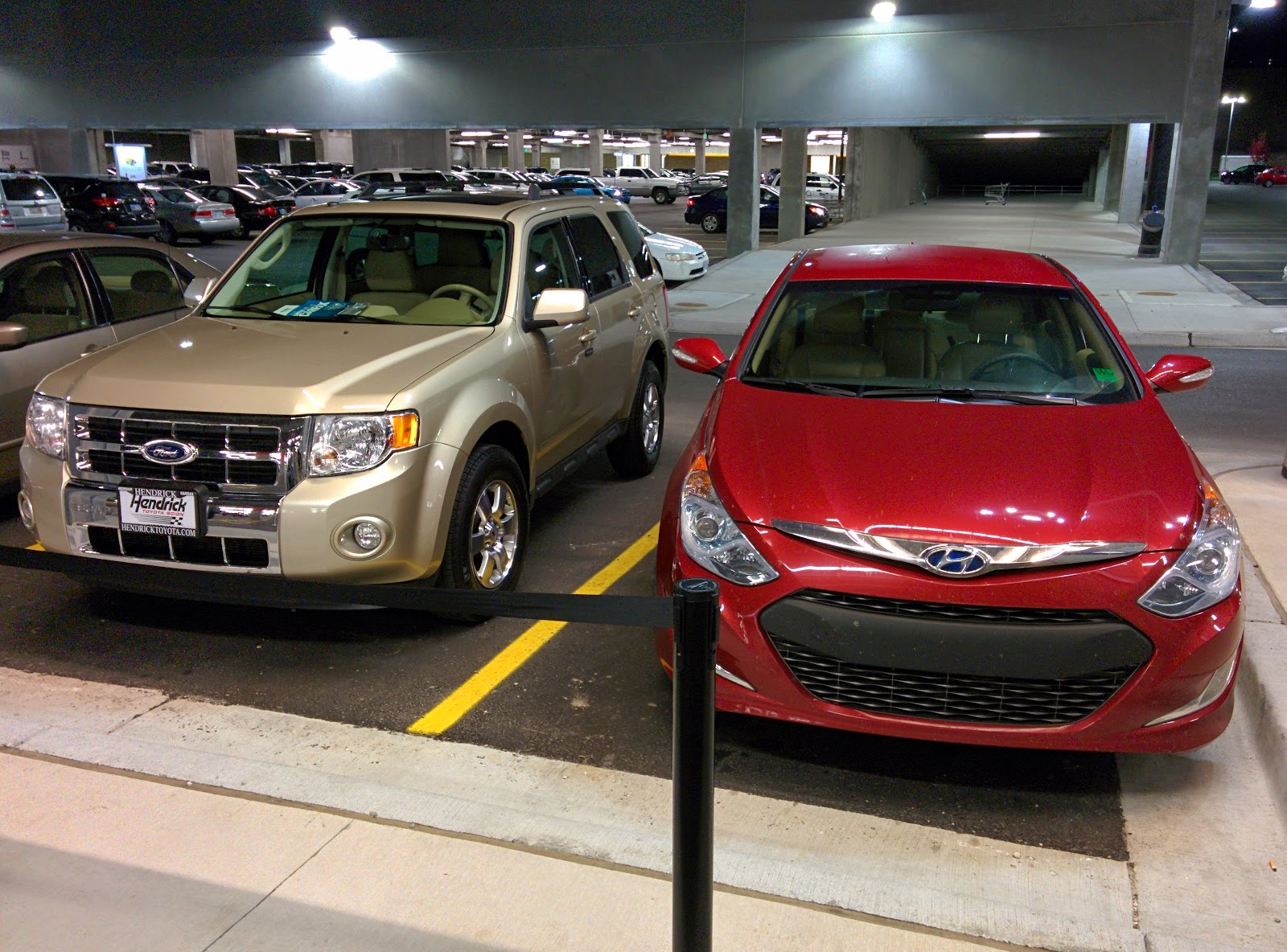 Now - the last thing. I found out next year will only have 3 major superhero movies - The Avengers: Age of Ultron, Ant-Man, and the Fantastic Four. Compare that to eight scheduled for 2016, that's not a lot. It made me wonder what the past 15ish years have looked like in terms of major superhero movie releases. So I went to Wikipedia's List of American Superhero Movies and copied their list over to Excel. I pulled out several movies that I fundamentally disagree with (I'm sorry - "Teenage Mutant Ninja Turtles" are not superheros), entered their release dates, then wrote a tiny macro:

I used that to build data a usable format. The result was this chart:

Of course, all of that is ridiculous extrapolation - but who doesn't enjoy that?
Top 5: Android Lollipop Features I'm Excited About 5. The reworked notifications/quick settings area. Android's oldest advantage over iOS was its notifications panel. It's getting a fresh look and better functionality. 4. Smarter lock/unlock features. No need for a pin/passcode if it's connected to my watch. 3. Project Volta - apparently adding a significant amount of battery life via smarter software. 2. Material Design. It's so beautiful. 1. Google Fit. I hope it's the Life Tracker for the masses.
Quote: “Congratulations... I guess?”- Joe, after I told the guys I made a chart of superhero movies -