I have a theory about stress, not all types of stress, but certainly some times. The basic premise of my theory is this: The human body seeks a certain level of stress and will adapt itself to find and maintain that level. The overall amount of stress or adversity you'll face in life is, for the most part, fixed and out of your control. Here's a made up example: Let's say you workout at the gym for an hour and a half total each week. For that hour and a half, you are bringing on all sorts of physical stress and hardship - but for the rest of the week you are able to do most things without any difficulty. Compare that to a person who never goes to the gym. They don't have any major spikes in their level of physical stress. I believe this person will come to find that little things like carrying groceries or getting out of bed will become more and more taxing as time goes on. Let's compare those two in a hypothetical graph form: 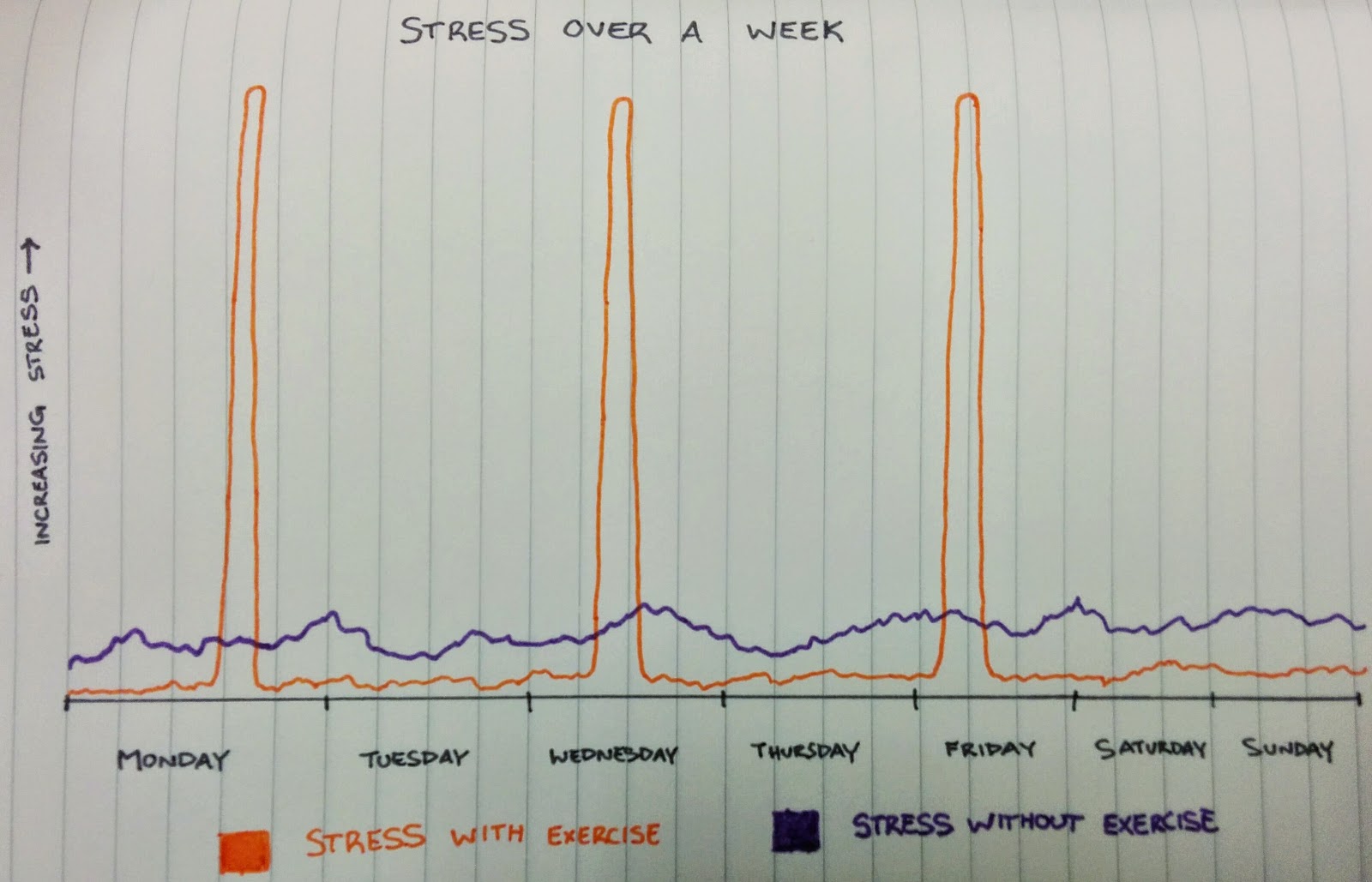 Obviously I put a lot of work into that. The overall amount of stress is represented by the total area under each line. If I drew it right, my theory states that the total amount of ink to fill the area under the orange line should be basically the same as what it would take to fill in the area under the purple line, the two possibilities yield equal amounts of stress. The person who works out, though, is much less stressed for the vast majority of the week. That's the person I want to be. That's the person I think I am.
Guess what: I just taught you about integrals and you didn't even know it. Those are those fancy math symbols:

HA! You learned some calculus and you didn't even know it.
Anyway, that's my theory. It's just a theory. I think it could probably be extended to other things, but I'm not going to belabor the point.
I wrote this whole post basically in conjunction with my previous post (about my desire for some sort of Life Reference Guide). I split them up because I felt like it.

Top 5: Other Things to Which My Theory Might Apply
5. Learning - for every question you learn the answer to, you realize that the answer brings with it another question.4. Money - either take the stress of making and keeping a budget or take the stress of having no more money.3. Thrill - people who go out seeking thrills all the time might become numb to them, whereas people who don't seek thrills might be really wowed by how fast their toaster toasts.2. Studying & Schoolwork - either take the continual small stress of studying a little bit every night a few weeks before the exam or take the single massive stress of pulling an all-nighter.1. General happiness - the prince has a palace and servant to wait on him hand and foot, but has the weight of the kingdom on his shoulders and doesn't appreciate the service; meanwhile the pauper has no servants, but doesn't have to worry about the entire kingdom.
Quote: “I think you're going to have a hard time selling that one”- Melissa, about my theory (specifically, that last 'happiness' part of it) -