Motto: The Quantified Masses, The Hunt for Ripped October, The Yes Man Cometh, All Other Potential Names

I wrote this big huge long piece about the quantified self, but posting it now seems like beating a dead horse. There was one particularly important bit that I don't want to kill, so here's my "one last thing": 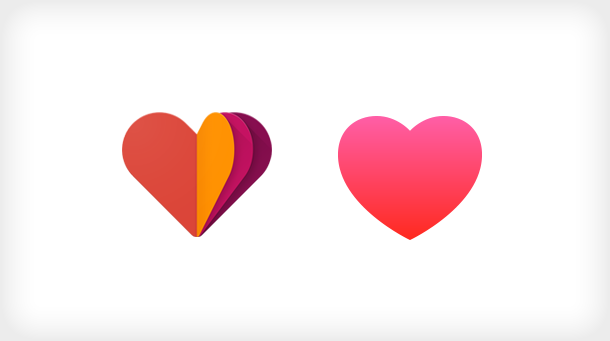 The quantified self movement has been edging in on "mainstream" for years now thanks to Fitbit, Jawbone, and Nike. I think it is about to get a violent shove into the limelight by both Apple and Google. Apple's HealthKit (the heart on the right) and Google Fit (the heart on the left) are two platforms for health and fitness being built into the two dominant Operating Systems of the day. Apple's introduction of iOS 8 earlier this week gave the world the Health app - a central repository for all of your quantified health and fitness data. The Apple Watch will be a member of a large category of devices that feed data into this platform. As soon as Apple addresses a bug, applications will start feeding data into the Health app. Meanwhile, Google's next version of Android (rumored to come out in about a month) will be introducing a similar ***concept, but not a similar ***application. Google is ***not believed to be working on its own fitness application, but instead merely providing a framework for developers to build their own 3rd party solutions. Whereas Apple's health app will store your fitness data on your phone, Google will be storing it in the cloud. This plus a RESTful API will allow web developers to use the Google Fit platform. I was very impressed with Apple's Health App in the 3 minute overview my wife game me. It looked awesome. I can only hope I have such strong feelings with my own OS of choice someday. ----------------------- and that's the end of that ---------------------- I had several hundred words down here, but I'm not going to make you read any of it. I write because I enjoy writing. Not necessarily because I feel the need to have tons of people read my stuff. There's a reason I don't evangelicalize this blog. Mystery 30 Day Challenge! Today marks the transition between months, and thus the transition between 30 day challenges. On September 2nd I wrote about the August challenge and announced that this month's challenge was a secret. That was not meant to drum up interest, it was mostly meant to show that I WAS in fact keeping up this running New Year's resolution, but telling everyone would ruin the challenge.

For the past 30 days, I've been a Yes Man. I knew when I started these 30 Day Challenges that I wanted to do a month of saying "yes", I just couldn't let anyone know that, because that's when people start saying "hey, you should, like, uh, see how long you can stand on the roof of my car as I drive around town!". 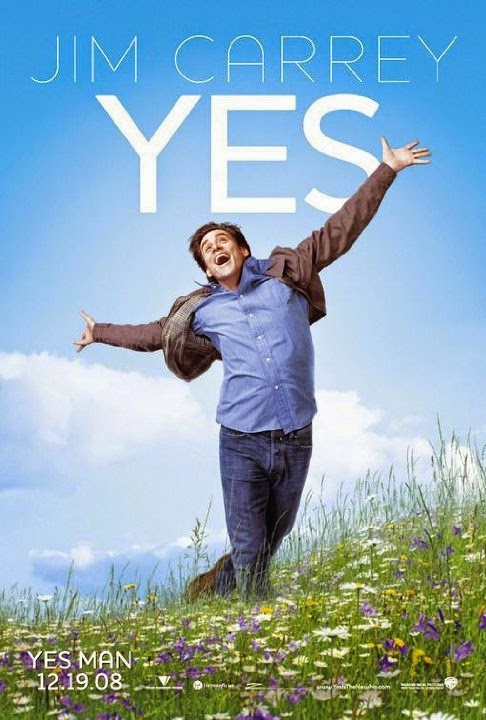 I saw the movie "Yes Man" for the first time 8 years ago when it was out in theaters. Although critics did NOT like the movie, I really enjoyed it. I've seen it probably a dozen times now - not because it's hilarious or because it's a good movie or anything, but just because it's got a really upbeat vibe and a positive message. I even checked out and read the book "Yes Man" that inspired the movie. The book is very, very, very different. The main character isn't the same dude. He takes on the challenge voluntarily. He describes how his life changed in a few hundred hilarious pages. It's definitely worth the read. Anyway. Here's what 30 Days of saying "yes" to everything was like: Not that different! For several reasons - I don't say "no" all that often, I don't get invited to do things I'd likely say "no" to all that often, and because this month was so busy I didn't have much time to do anything anyways. There were some differences, though. I made a list: Things I said "Yes" to that proved interesting: Watching football at my buddies house with a ton of his friends. Made a fantasy football trade that I wouldn't have otherwise made - that has ended up benefiting me in the long run. Sweeping the floor at First Watch. Waking up at the same time as Melissa, even though I really could sleep in for another hour. Watching football at my other buddies house. Waking up at the same time as Melissa, even though I really could sleep in for another hour... again. Going to the gym when I didn't really want to, finding an art show instead. Waking up with Melissa... I just stopped writing this down. Learned the "Thriller" dance. Drank a shot of 2 liquors, 2 mixers, and a wine all combined. Watched "Oldboy" thanks to the lid of my Jones Soda. Went to Chuy's for happy hour. Note that I wouldn't have said "no" to all of the above things... I definitely would have done a few of them voluntarily. However, not having the option to say "no" made some of those things much, much easier. Even without the option to say "no", I think I probably cheated on several occasions. If I had two offers in conflict with one another, I could pick between them. I managed to stay in bed a few mornings because Melissa didn't phrase her "you should get up!" in a direct manner. Really, I could have done a better job. Overall, though, it was a very fun and successful month. I'm going to continue to say "Yes" more. Next month's challenge: The same as last year's October Challenge - eat a lot. Lift a lot.

Top 5: Things I'm Looking Forward To
5. The Upcoming Holiday Breaks4. The Avengers: Age of Ultron3. Android L, Android TV, Updates to Android Wear2. Buying a Second Car (for reals this time)1. Melissa and I Getting Our First House Together
Quote: "1 Gain = 1 Bill, or what's the math on this one?" - Random Redditor, in response to somebody talking about the relationship between grocery bills and muscle size -