Motto: "What running features should each Column have?"
Five months ago I wrote a feature post titled "Minimalist Thought Experiment". In that post I gave a definition of the phrase "thought experiment", ripped straight from Wikipedia. What I didn't say was how they are related to my life. I do thought experiments all the time. I love them. It's so fun to take something you know, throw all of your preconceived notions out the window and take a fresh look at it. You start with a very fundamental question. After the question is well defined, you start thinking of a broad outline of stuff. You take big strokes to cover all the facets of the problem. After you're fairly certain the 20,000 ft view looks about right, you start getting down to specifics. If it sounds like no fun, then you just haven't asked the right question. Thought Experiments I've Done: *Note these first 3 or 4 are very similar in spirit. 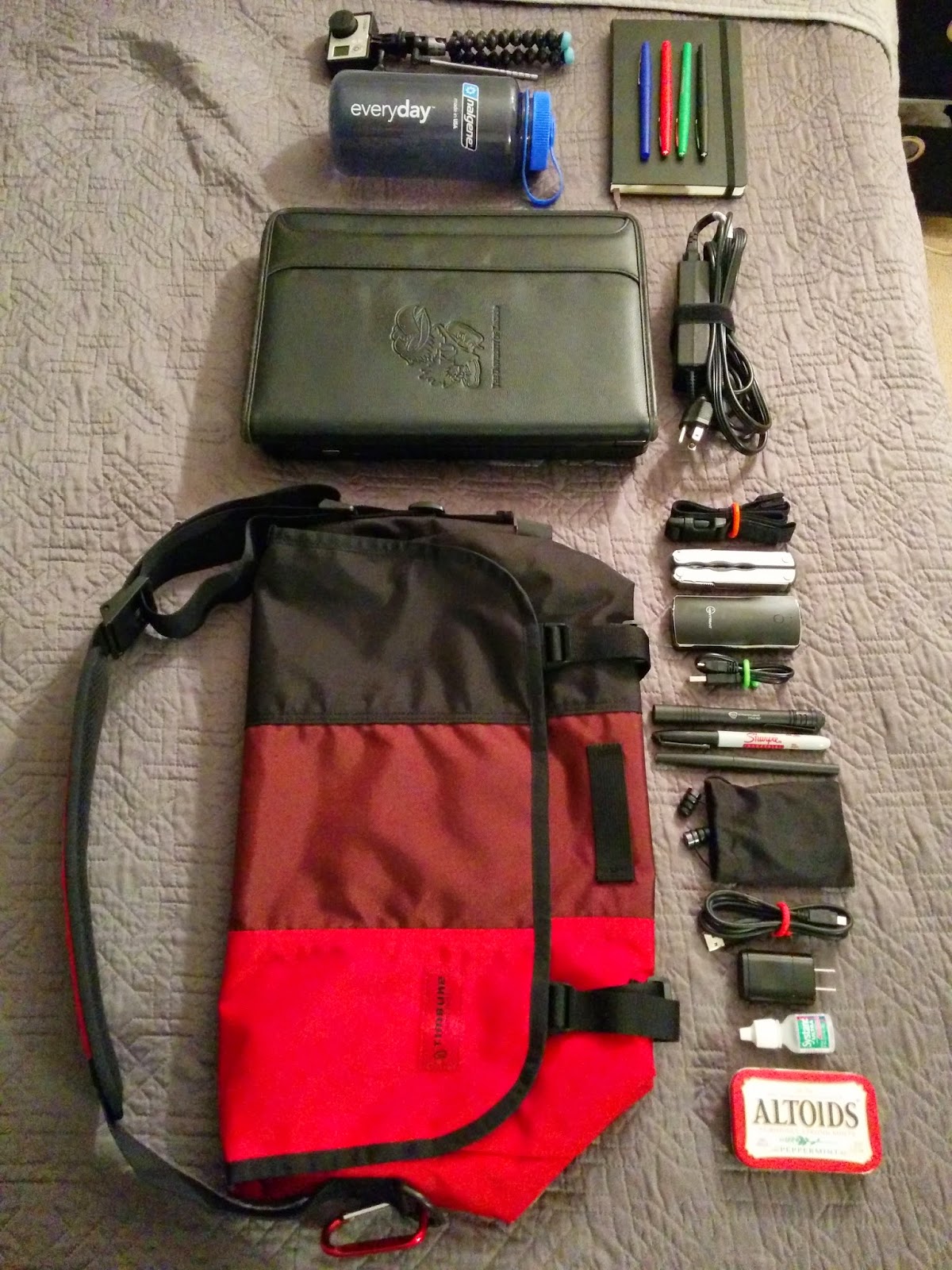 EDCWhat minimal set of items would best equip me to handle the widest array of situations I might come across in every day life, and how could I equip them? I'm going to go into a bit of detail on this one to give you a feel for how I approach these things. The inciting question begets several new questions: What things do I absolutely have to have? What can I fit in my pockets? What can't I fit in my pockets? Knowing I'll probably need some sort of bag, what should that be like? What things would I like to have, given the space? Which of these things do I already own? How much money am I willing to spend to get the rest? At that point, I had a list of things to put in my hypothetical bag. I had an idea of what type of bag I wanted, but no official pick. I knew I wanted something to hold a tablet and a waterbottle and I knew I didn't want it to sit on both my shoulders. I started Googling things, narrowing down my menu of options. Eventually I settled on a bag that I used and loved for over a year. The fact that it subsequently changed doesn't matter. I'm still much better off than I would have been had I never gone through that exercise to begin with. 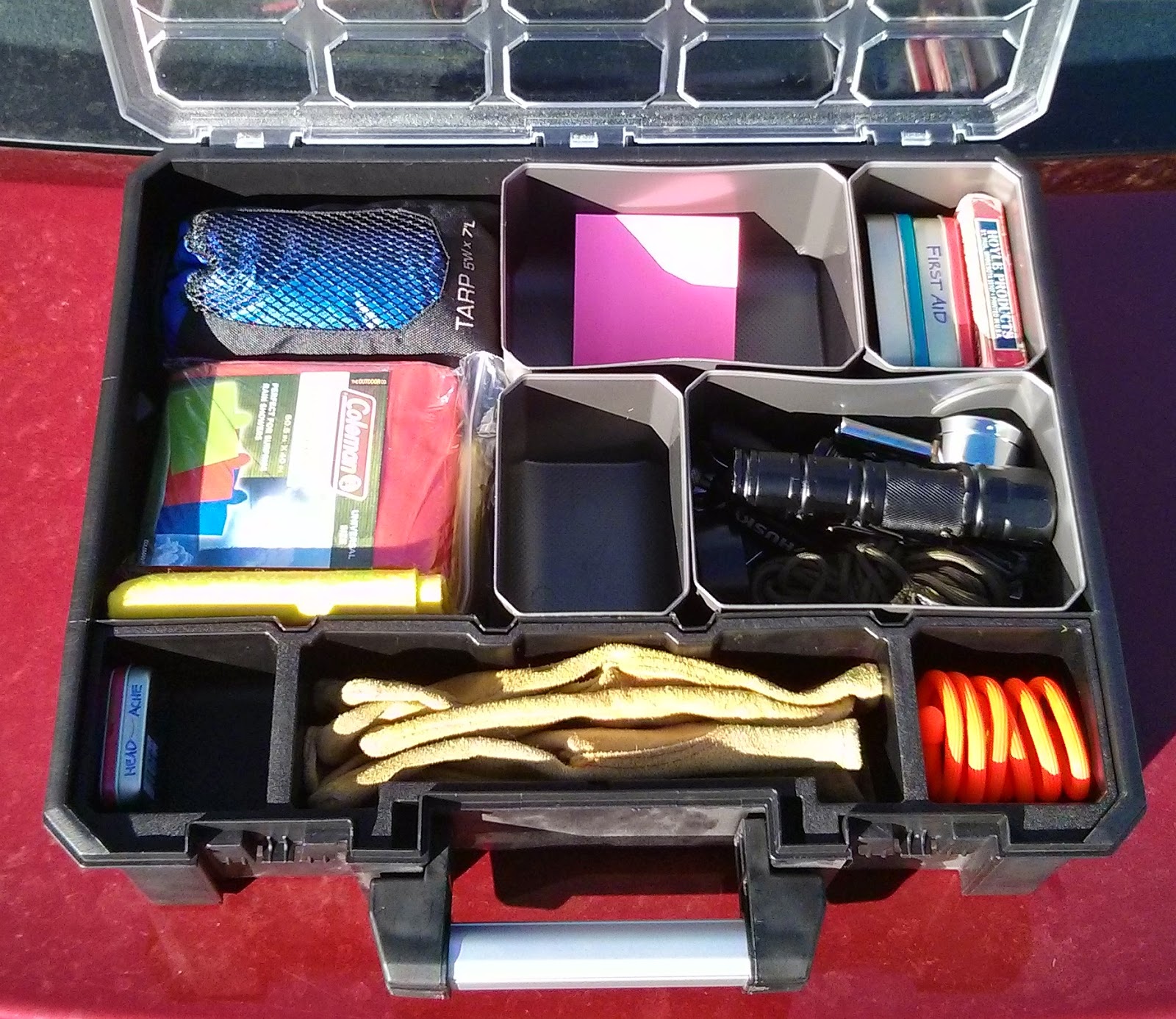 Trunk MonkeyWhat minimal set of items would best equip me to handle the widest array of situations I might come across on the road?" Now I have a toolbox in my trunk that's saved my bacon on more than two occasions. 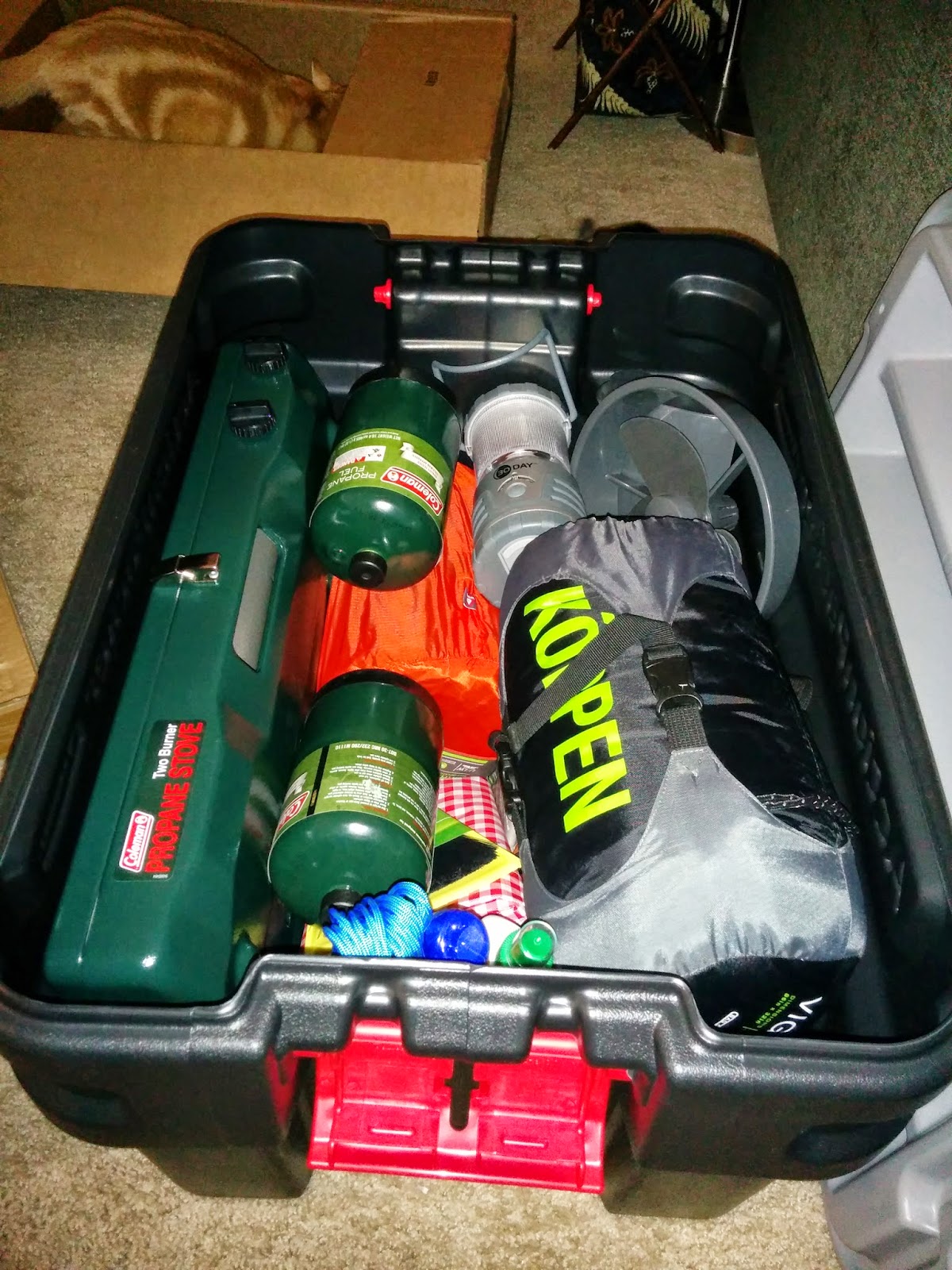 Camping Box/Action PackerWhat minimal set of items would best equip me to handle X situation? Now I have a box full of stuff to go camping that's going to come in handy real soon. 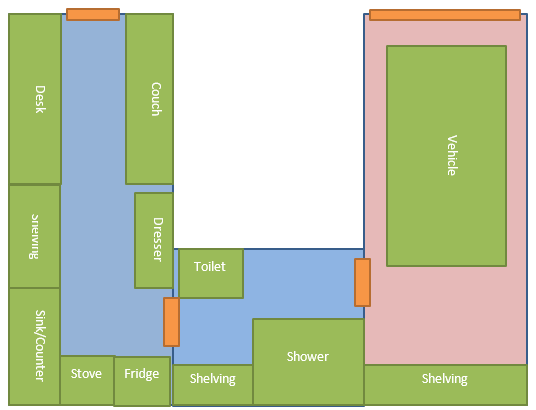 Minimalist Living/The 100 Thing ChallengeIf I were to live on my own, what is the smallest amount of space and minimal set of items I'd require to live a happy, semi-comfortable life? This thought experiment never jumped into real life in any way. If it did, that would mean that something had gone terribly wrong in my life... so I hope to never put this one into practice. Even still it was a useful exercise. After I started thinking about this problem I discovered a thing called the "100 Thing Challenge". Beyond the "minimal set of items"-type experiments, I've done several others. 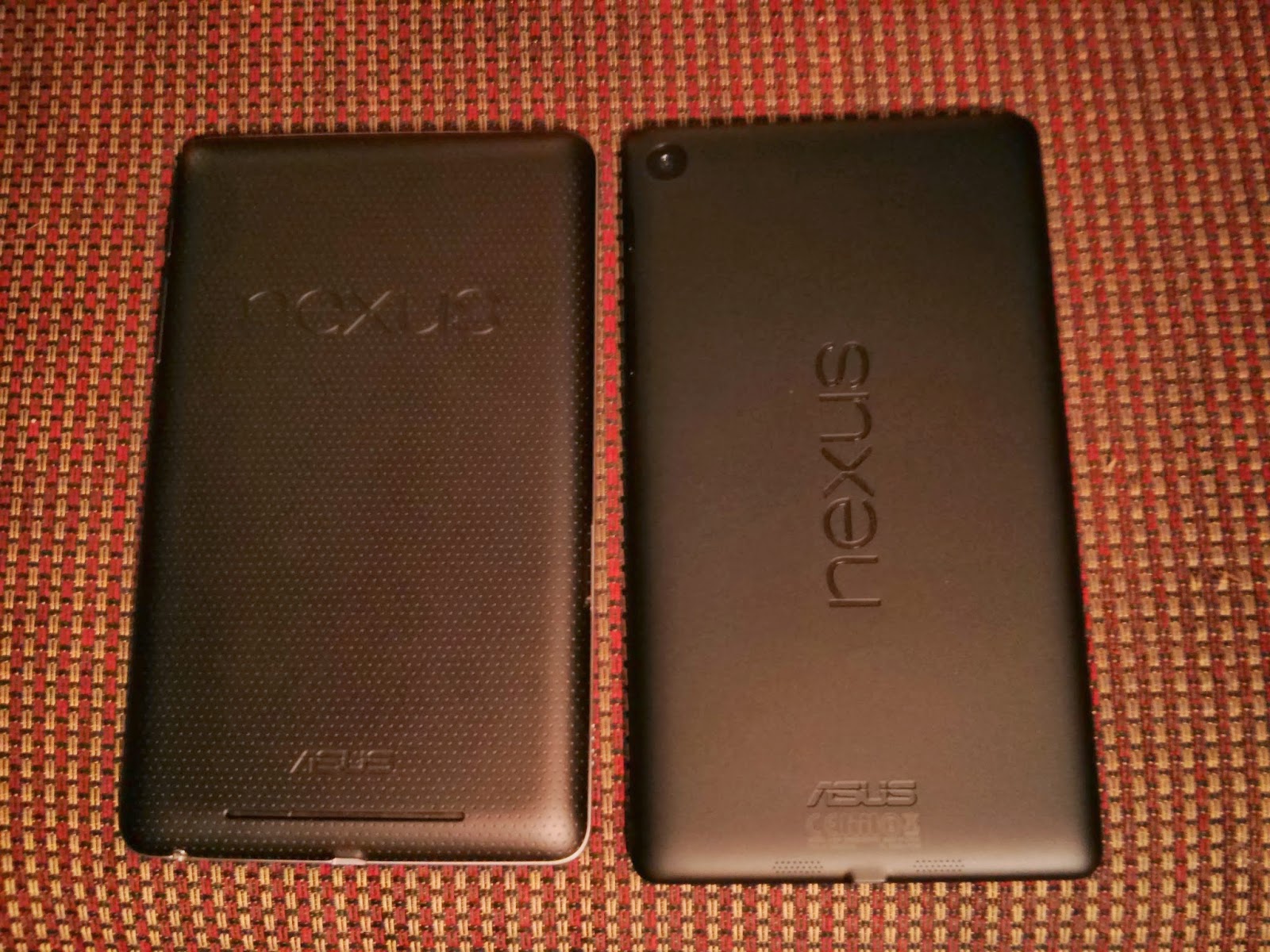 Technological SetupWhat platforms, Operating Systems, and programs would work best for any given set of needs? This has translated over into the real world insofaras I've made one to fit MY given set of needs. 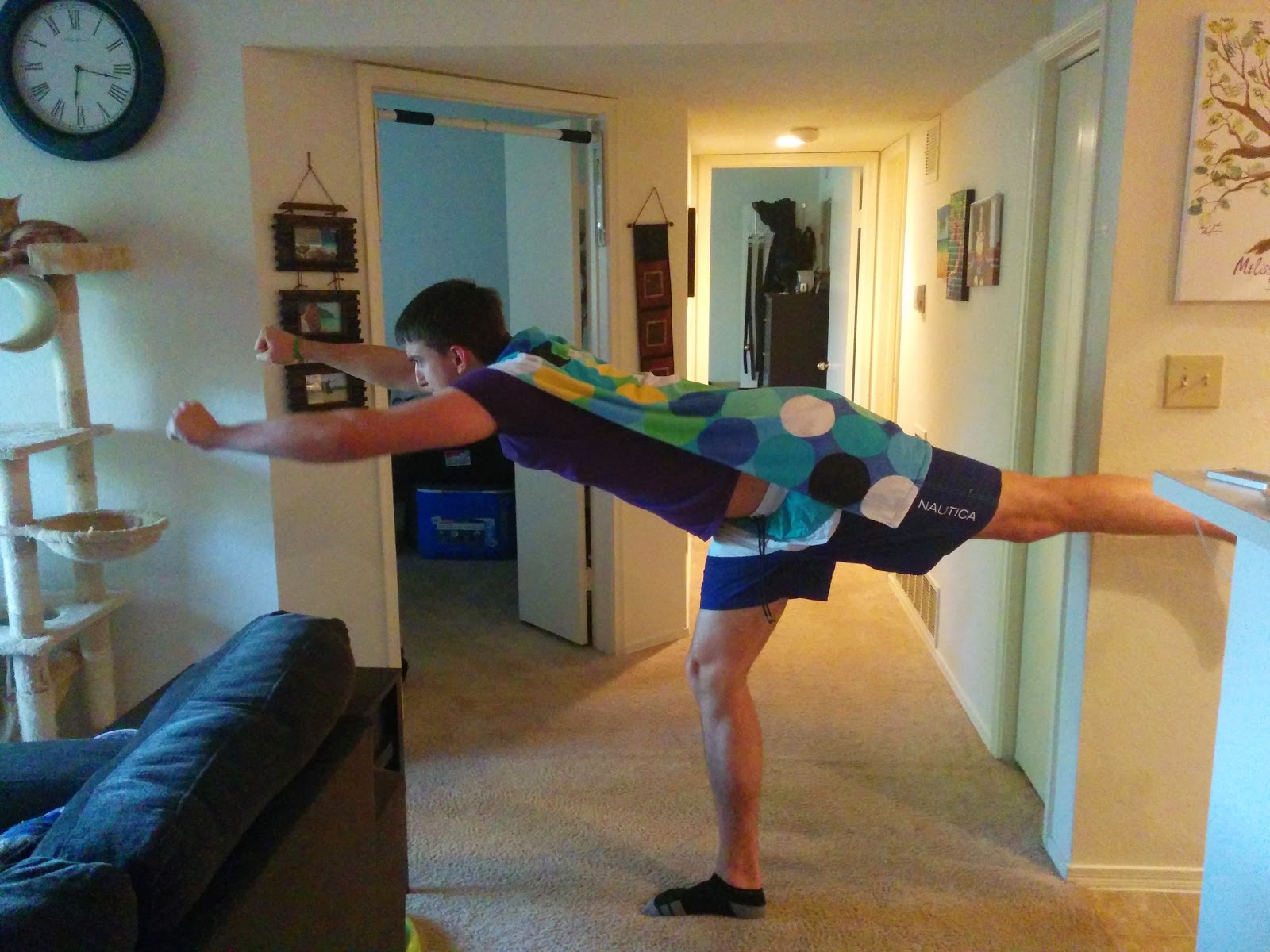 SuperpowerIf you could have any superpower, what would it be? I've gone through several iterations of this. I don't want invulnerability because you'd eventually be the only living thing in the universe. I don't want flight because I think that flying would require an incredible amount of physical exertion (nobody ever asks that question, is flying more difficult than running?). I settled on super intelligence... kind of like the movie Limitless. Maybe even something as simple as "The ability to know the answer to every question I can come up with." Then I'd know the best answer to all of the questions I'm writing about in this post (as well as everyone's dirtiest secrets, the winning lottery numbers, the keys to eternal youth, how to bring about world peace, etc).
This is the only photo I took specifically for this post. Melissa is supportive (minus the "you should put a shirt on" comment). 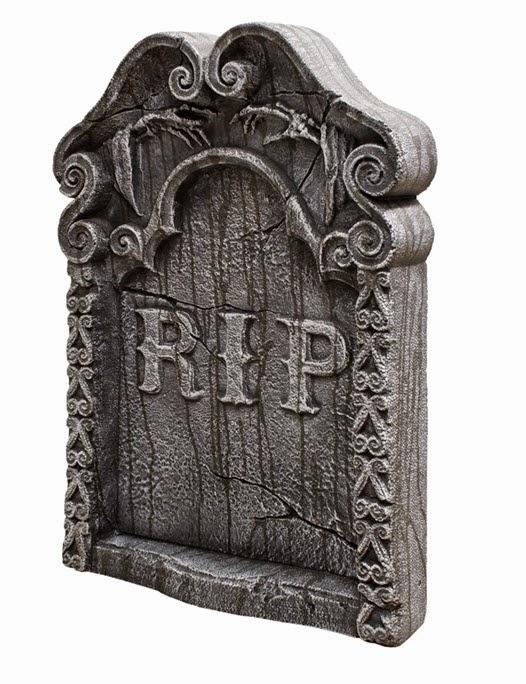 Best way to die/the worst way to dieWhat would be the best/worst way to die? My friends and I came up with tons of examples of awesome ways to die. There was the ever-popular "quietly in my sleep at the age of 112", but that's boring. My favorite scenario was one I proposed: You just so happen to look like the President of the United States, which is awesome because he's your favorite President ever. He visits your hometown and you two just so happen to meet each other in a convenience store. You tell him you really respect him and what he's done with the country. He thanks you and shakes your hand. Completely overwhelmed with excitement, you exit the store. Your head is blown off by a sniper from 600 meters out who mistook you for the President. Because he thinks he shot the President, he flees the area without hitting the actual President. 1. You don't see it coming. 2. You die instantly. 3. You just met your hero, fulfilling some sort of lifelong dream. 4. You've saved your hero's life. 5. You go out as a National Hero (sorta). That's how I want to go. Regarding the worst way to die, we came up with tons. I'm not going to enumerate them, but they can all be summarized as "slowly and painfully". Thought Experiments I've Partially Done 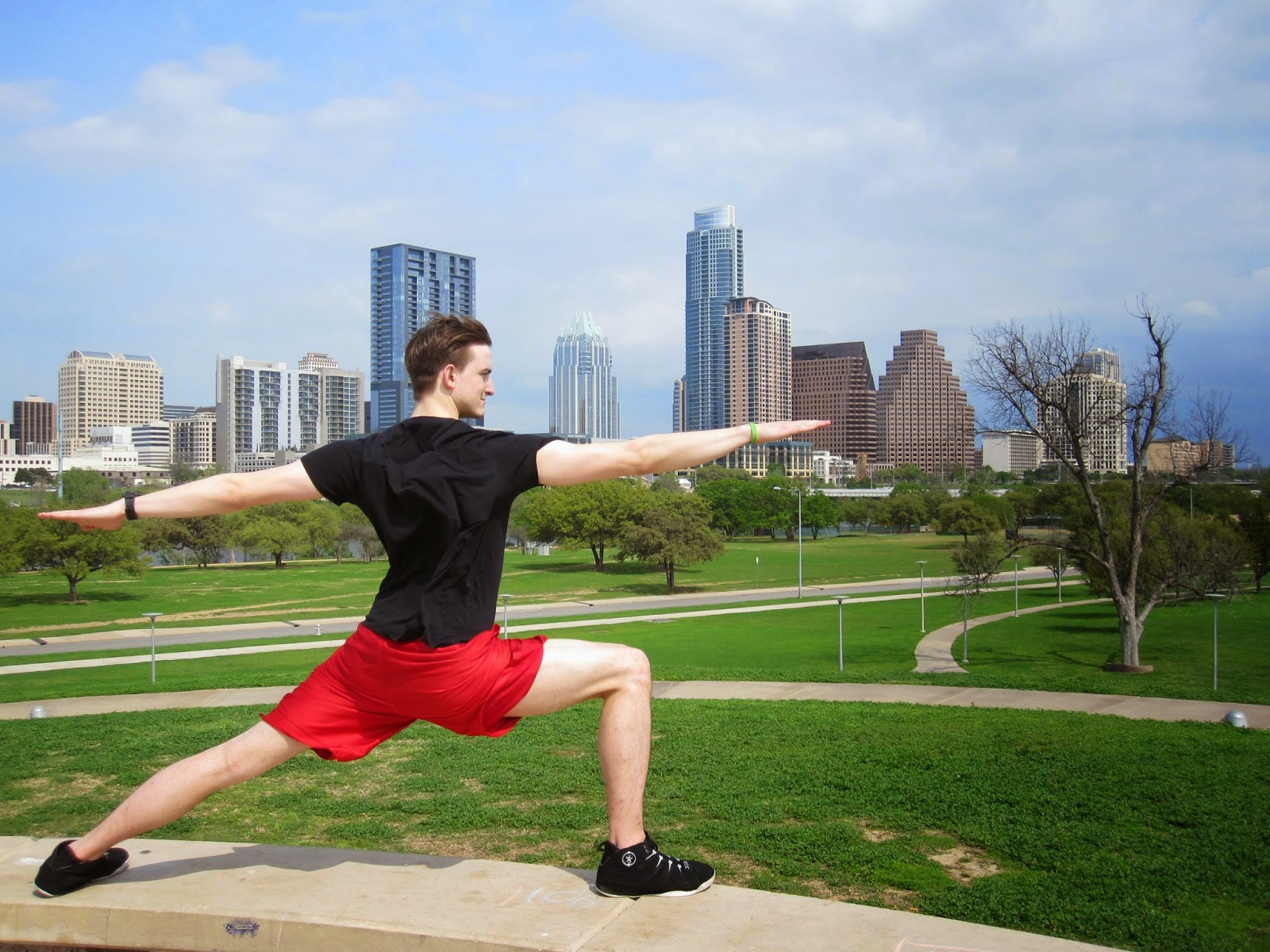 Perfectly HealthyWhat would a day/week/month in a perfectly healthy lifestyle look like? This one I've done... sorta. I never officially finished it. 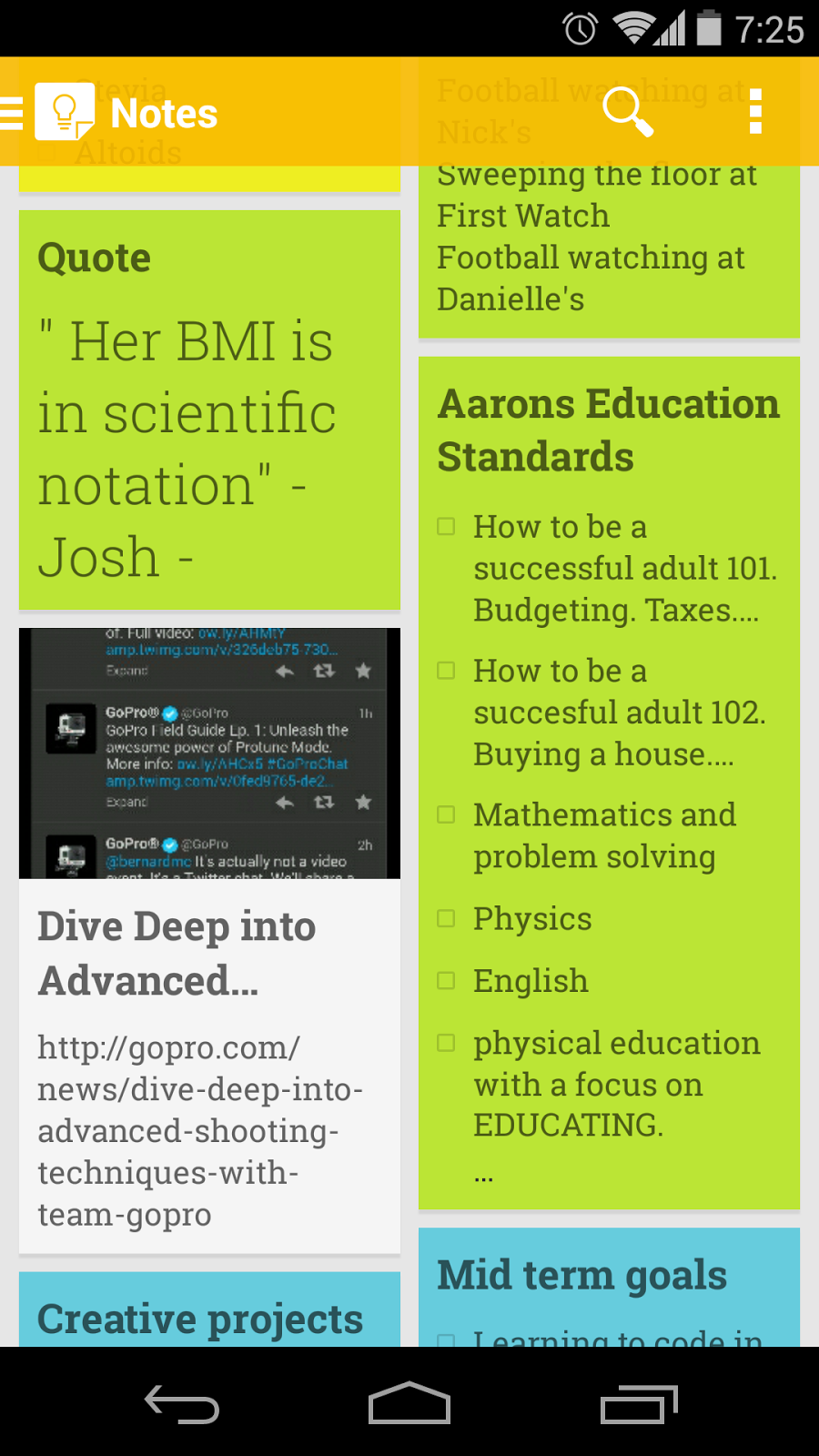 Ideal Note taking systemWhat platform can I use to take and keep notes on everything that I need to keep track of in life? This question dogged me for years. I decided that I needed: Ubiquity - access on every platform Security - password protection and encryption on individual notes Speed & Search - take and find notes in under 1 minute Formatting - support for photos, videos, audio, hyperlinks, hyperlinks between notes, tagging, and basic text formatting Usage Limitations - none. Or at least no practicle ones. Bonus feature: Calendar integration I tried to make something work well over a dozen times throughout the past five years, Melissa can attest to how annoying it was. I spent a lot of time on the Wikipedia Comparison of Notetaking Software page. I tried to build systems for years. I finally have settled on a sorta 4-pronged approach using Google Drive, Calendar, and Keep along with Keepass for my secure data. It's definitely not ideal, but the problem is there IS NO IDEAL NOTETAKING SOLUTION to fit my needs - and that fact makes ZERO sense. I'm frustrated to this day with this fact. This one is sort of a work in progress. 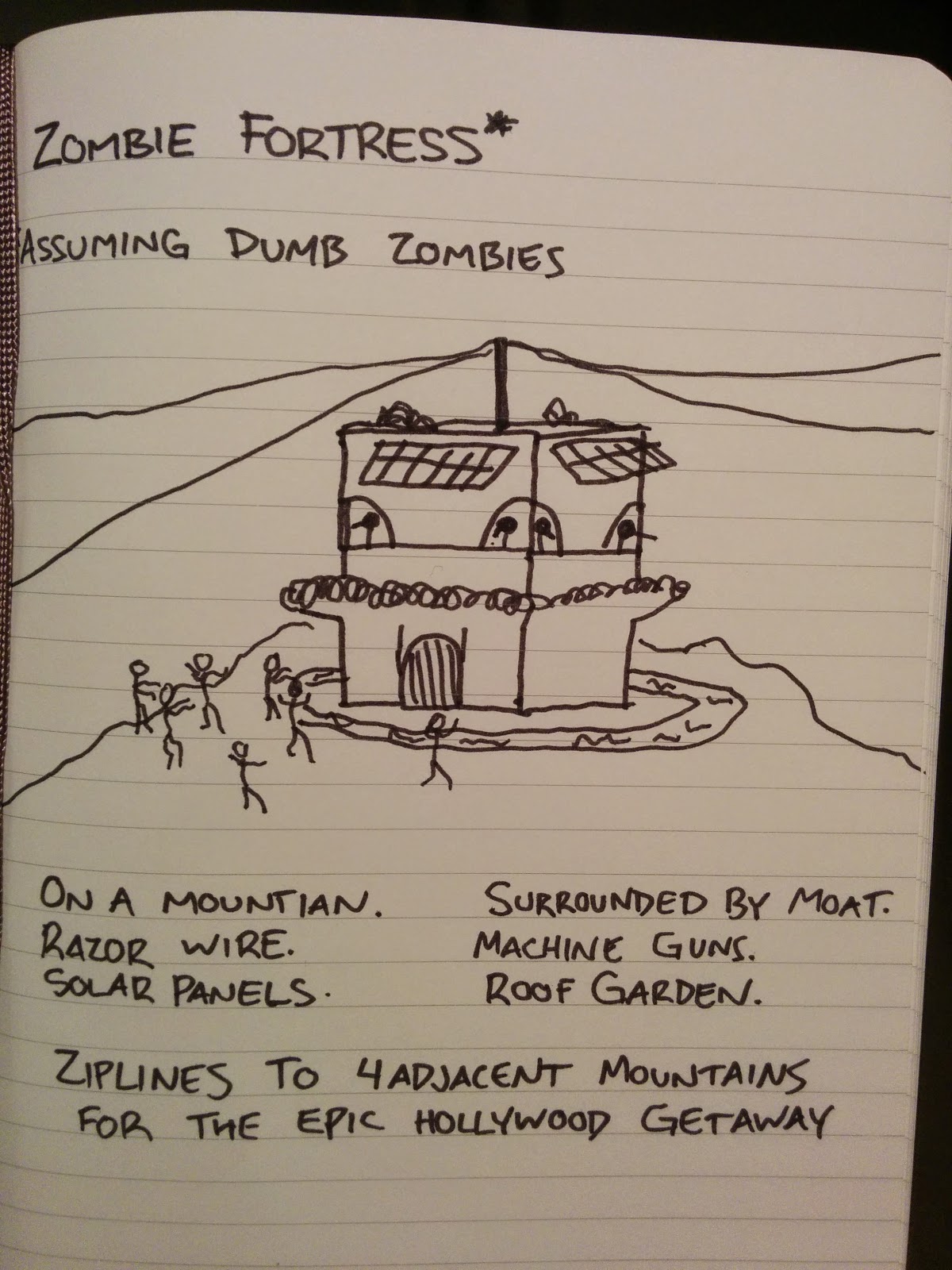 Zombie Apocalypse Survival Strategies You just heard on the news that there's a zombie infestation that's spreading across America - you've got 1 hour before it hits you. What do you do?
This is everyone's favorite thought experiment. Has not yet translated over into the real world, but that's just a matter of time. Technically this is still only partially done. We never wrote down an officially accepted gameplan. 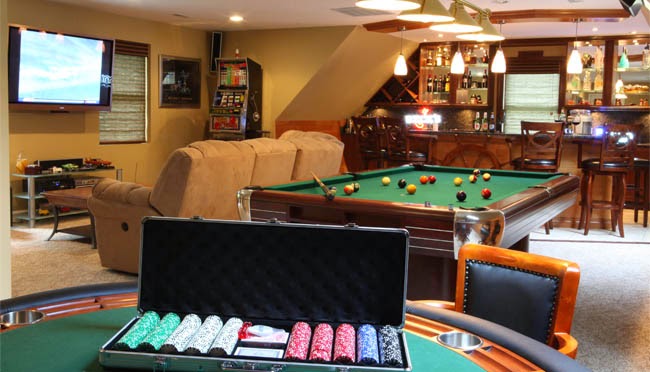 Man CaveIf my future house has a "Man Cave" of some sort, what would I want in it? This one is fairly new. I haven't done much in the way of this yet. I know I want a home gym, workshop, and probably some sort of bar-type thing. Also I'd want it to be close enough in proximity to friends that we could use it as our main gym. This one is still only partially done. Thought Experiments I Want To Do Aaron's education standards
If I rewrote education standards, what things would I ensure we are teaching to tomorrow's adults. Aaron's Worldwide Society
If I were able to magically change history and the infrastructure of the current world and its population, how would I architect it to make for the greatest amount of happiness, healthiness, and general "goodness" for the whole of society and the world. $1500
What's the most fun you can have with a given amount of money, in this case $1500. I'd probably also do $1, $100, $10,000, $10,000, and $1,000,000.

Top 5: Thought Experiments I WON'T Be Doing
5. How long could I feasibly sit in this chair before I died?4. How you could raise a child to believe he/she was living in the center of some sort of "The Truman Show" type of world?3. What is the fastest possible method to go to jail (without collecting $200)?2. How'd you best survive a fall out of an airplane without a parachute?1. Where is the Holy Grail? Who really killed Kennedy? What's at Area 51?
Quote: “Her BMI is in scientific notation”- Josh -